Migrants can today apply for skilled worker visas under the “simple, effective and flexible” system. They will be assessed on their earnings, language skills and employment status. Points could also be awarded for qualifications or for occupations where there is a staff shortage. A global talent visa, an innovator visa, a start-up visa and the ­intra-company transfer route will also open to applications for the first time today.

The Home Secretary said the ­system will encourage employers to train domestic workers.

And the Home Office said it will also allow bosses to recruit “the most highly qualified from across the globe to drive the economy ­forwards and keep the UK at the frontier of innovation”.

Uncontrolled migration across the EU was at the ­centre of the 2016 Brexit referendum.

Ms Patel is replacing the free-flowing system with tougher checks and controls. 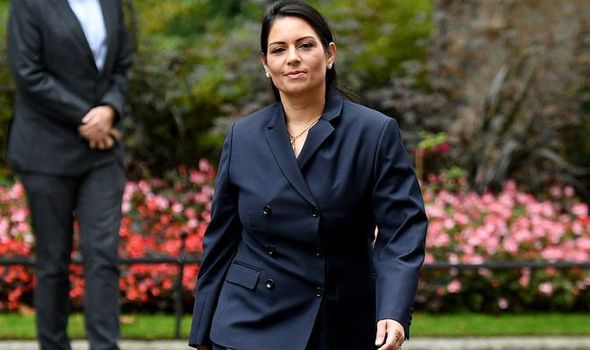 She said: “This government promised to end free movement, to take back ­control of our borders and to introduce a new points-based ­immigration system. We have delivered on that promise. This simple, effective and flexible system will ensure employers can recruit the skilled ­workers they need, whilst also encouraging employers to train and invest in the UK’s workforce.

“We are also ­opening routes for those who have an exceptional ­talent or show exceptional promise in engineering, science, tech or culture.”

People will normally need to earn at least £25,600 per year unless the going rate for that job is higher.

They will need to have enough money to pay the application fee, ranging from £610 to £1,408, the £624 healthcare surcharge and be able to support themselves, with at least £1,270 available.

● At least 15 migrants crossed the Channel by small boat to Dover yesterday – just hours after a new deal was reached to prevent such arrivals.

Ms Patel has pledged up to £28milllion to double patrols along a 90-mile stretch of French ­coastline in an attempt to scupper ­people-smuggling gangs. It is the fifth consecutive day of migrant crossings.