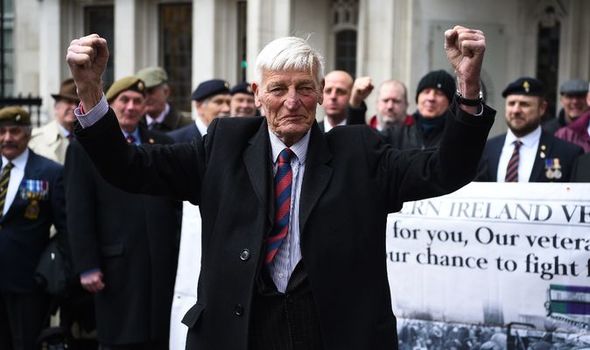 Solicitors are demanding “an urgent and transparent review” of the decision to prosecute Dennis Hutchings, 79, following the acquittal of two former Paratroopers. Mr Hutchings is facing trial in Belfast by judge only over the shooting of John-Pat Cunningham. The tragic 27-year-old, who had learning difficulties, died when he ran away from a Co Tyrone Army patrol in 1974.

The decorated soldier, who is on dialysis, has twice been investigated and exonerated. But his trial is set to take place in the autumn.

He is planning to attend a rally outside Parliament tomorrow, demanding an end to the witchhunt against Northern Ireland veterans.

The Paratroopers, known as Soldiers A and C, were acquitted of murdering a top IRA man when statements they made after the 1972 incident were ruled inadmissible evidence.

After the case collapsed, the Public Prosecution Service of Northern Ireland said it was reviewing seven cases against veterans.

In a letter to the service about Mr Hutchings’ trial, solicitors, Devon-shires wrote: “The prosecution say two soldiers fired in total five rounds and it cannot be said which soldier was responsible for Mr Cunningham’s death.

“There is no forensic evidence. This has been lost at some point in the past 45 years.”

They went on: “The legal question is what evidence is there that Mr Cunningham was shot at by Dennis Hutchings. The answer is none.”

They added: “Mr Hutchings denies that he shot at and/or shot Patrick Cunningham.”

Three more soldiers face trial over Northern Ireland shootings. But ministers are considering banning prosecutions of veterans of the Troubles.

They propose a “Truth and Reconciliation” process, which would let families learn how loved ones died. Terrorists or troops could reveal what happened without being prosecuted.