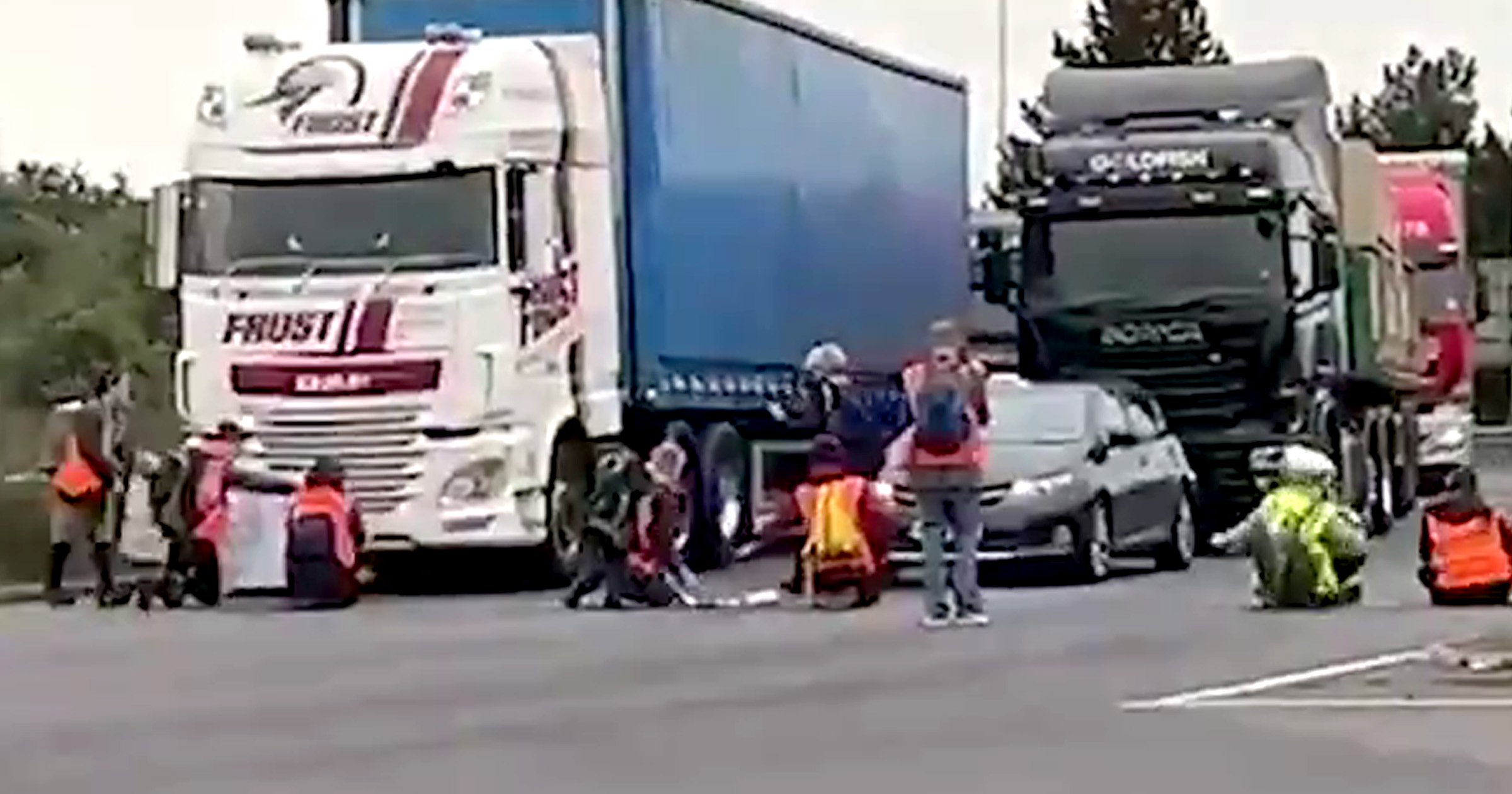 Insulate Britain activists are back on the M25 this morning, despite an injunction which could see them put behind bars.

Protesters targeted junction 30, near Thurrock, Essex, from about 8am, in defiance of the High Court order made last week.

Yesterday legal action was launched by the Government against the climate activists, who face fines or up to two years in prison for blocking the M25.

Protesters have been warned they will be served injunction papers over their series of sit-down protests in recent weeks.

After blocking the M25 several times, the High Court granted an injunction to prevent them doing it again, with the threat of jail or unlimited fines.

Despite this, Insulate Britain were back on the UK’s busiest motorway yesterday, blocking the same junction twice in six hours.

Activists obstructed the UK’s busiest motorway at Junction 3 – the Swanley Interchange – with some gluing their hands to the road surface, causing tailbacks from around 7.30am.

Police said 11 people were arrested as part of the demonstration before the roundabout was reopened just before 9am.

But the group returned at 1pm when a further 16 arrests were made for the same offence. All 27 people are being held in custody.

A Government spokesperson said: ‘Peaceful protest is a fundamental right of our democracy, but we cannot allow this reckless and dangerous behaviour to continue on our roads.

‘We are already knocking on doors and serving papers to offenders who will be sent to court and could face fines or prison.

‘Police continue making arrests and are working closely with National Highways to shut down these illegal demonstrations and keep the public safe.’

Insulate Britain – an Extinction Rebellion offshoot – is demanding that homes across the UK are properly insulated in order to help fight climate change.

The group drew criticism earlier this month when one of their demonstrations was blamed on a four vehicle crash, leading to a woman in her 50s being airlifted to hospital.

Another woman was also left paralysed after suffering a stroke, as her son ended up stuck on the motorway for six hours trying to get to a hospital.

The High Court injunction obtained by the Government on September 22 means anyone blocking the motorway could be found to be in contempt of court, which carries a maximum penalty of two years in prison or an unlimited fine.

Police have said it is ‘very difficult’ to bring charges against the activists, who staged their seventh day of action on the M25 on Wednesday.

Lisa Townsend, Surrey’s Police and Crime Commissioner, said officers are receiving ‘an enormous amount of flak’ over their response.

She said: ‘It has been very difficult for the police because if they charge the protesters with a relatively minor offence, it is likely to be discontinued.

‘If they try to elevate the charge to a more serious one, they are finding it is not reaching the necessary threshold.

‘The public deserves to see a response from all parts of the criminal justice system and it is unfair for the police to be blamed if people do not end up before the courts.’

A statement from Insulate Britain said: ‘We are going nowhere. You can raid our savings. You can confiscate our property. You can deny us our liberty and put us behind bars.

‘But shooting the messenger can never destroy the message: that this country is going to hell unless you take emergency action to stop putting carbon into the air. Boris get on with the job.’

Activists welcomed a pledge by Labour leader Sir Keir Starmer to insulate every home that needs it in Britain over the next decade.

One woman glued to the road said: ‘That’s excellent news. Let’s get the Labour Party in. It would cut UK emissions by 15%, it’s the easiest thing to do.”

Another woman added: ‘When will the Conservatives do the same thing?’

As well as targeting the London ring road, protesters have blocked other important routes including the A1(M) and A20 near the Port of Dover.