Climate protesters have brought Westminster Bridge to a standstill, with activists saying they have ‘occupied’ the road.

Against the background of the Palace of Westminster, a large group of people have blocked traffic to call for action over the climate crisis.

The protest was organised by a coalition of groups which include Just Stop Oil, CND and Insulate Britain.

Several people kept up a steady drumbeat on instruments decorated with the Extinction Rebellion logo as the group gathered.

Earlier this morning, Just Stop Oil called for people to ‘peacefully join thousands’ in ‘civil resistance’ on the bridge.

A spokesperson from the campaign group said: ‘We are currently witnessing the breakdown of all we hold dear.

‘Our government has not “got this” – they are increasing the grup of fossil fuels at our throat.

‘If the government won’t stop approving new oil and gas projects then we will make them stop.’ 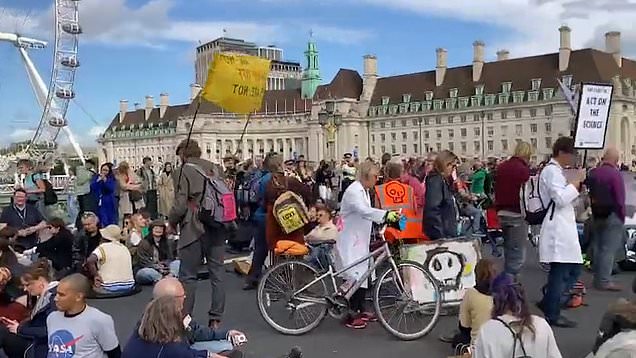 The Met, which has officers on the scene, has been contacted by Metro.co.uk for comment.

Groups from across London had been due to converge on Westminster this afternoon, passing through various corners of the city to spread their message.

In Euston, campaigners carried a banner declaring capitalism ‘the enemy of Mother Earth’.

Others spoken to by reporters were protesting against the Government’s mini-budget.

A protester called George, held a sign which criticised the Conservatives’ lack of ‘fiscal budget responsibility’ along with their record on fossil fuels.

‘I think no government can run if it’s spending more, like vastly more, than it’s bringing in,’ he said.

‘That can’t carry on forever.’