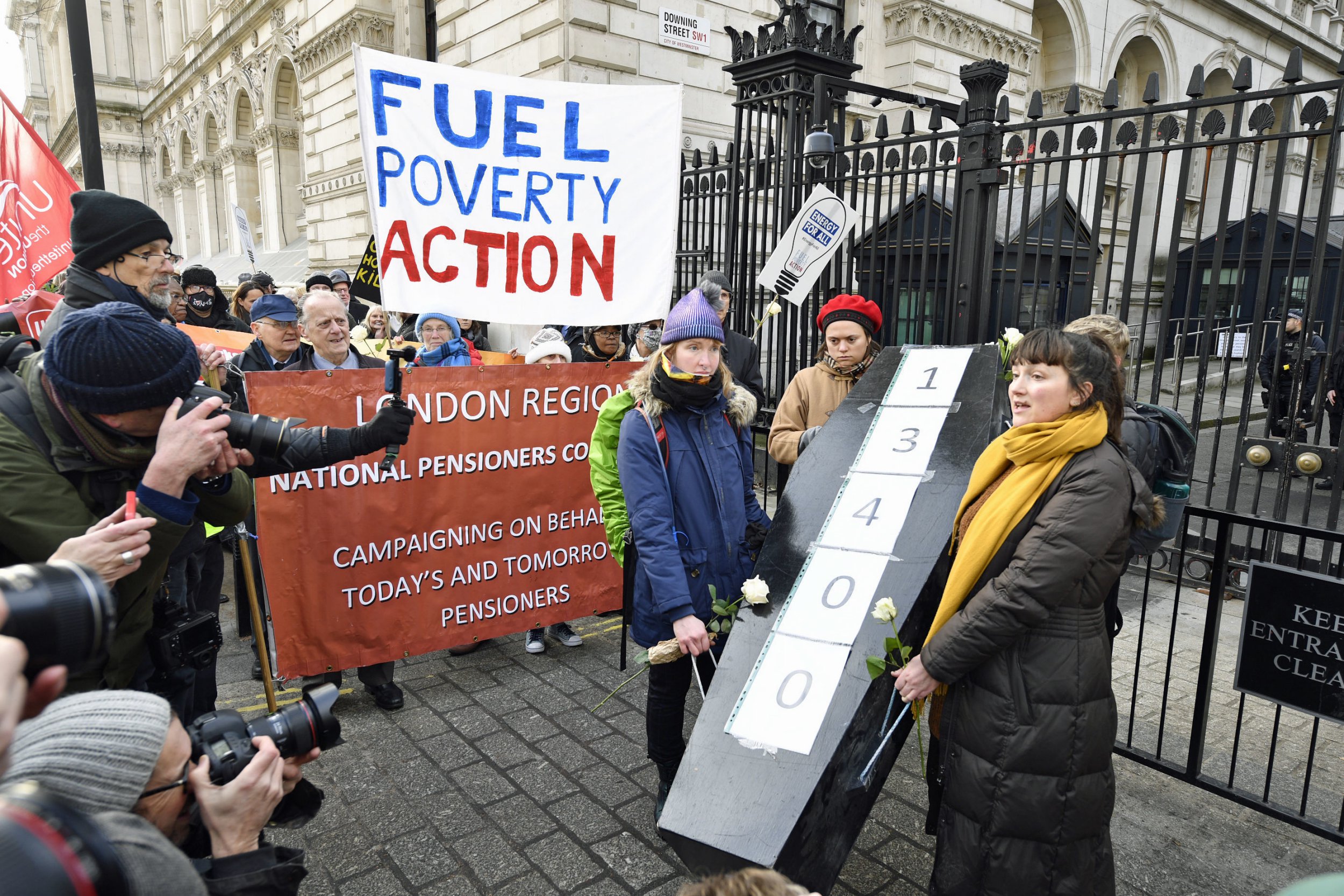 Activists from four groups including Fuel Poverty Action held a vigil outside the gates in front of the prime minister’s residence after delivering a letter calling for him to take further action to stop deaths linked to cold temperatures.

Fuel Poverty Action co-founder Ruth London said: ‘Nobody should be dying because they haven’t got enough money to keep their heating on and in many cases keep the lights on.

The coffin bore the number 13,400, which was revealed on Thursday as the official estimate of how many more people died between December 2021 and March 2022 in England and Wales compared with the non-winter average.

Of these, some 4,020 were estimated to have died due to the impact of cold housing, data published by the Office for National Statistics (ONS) showed.

That means an average of 45 people a day died as a result of living in an excessively cold home in England and Wales alone.

The excess winter death numbers are the second-lowest in decades, but experts fear they will spike after a months-long cost-of-living crisis.

National Energy Action said the figures ‘only cover last winter, when energy bills were half the amount that they are now’.

The charity says the number of households classed as living in fuel poverty has risen from 4.5 million to 6.7 million – nearly a quarter of all households in the UK.

Its chief executive Adam Scorer said: ‘Next year, these statistics will expose the full impact of today’s energy crisis.

‘The toxic combination of extraordinary heating costs, stagnant or falling incomes, and our notoriously poor, unhealthy housing stock will take a heavier toll with lives blighted by debt, ill health, and worse.

‘This winter we need the Government to give more support and stop millions falling through the cracks with the most awful consequences.’

Ms London added: ‘The stories we’ve been hearing are absolutely heart-rending: people who are wearing Covid masks at home because the air at home is too cold, too sharp on the back of the throat.

‘People who are sleeping with every single bit of clothing and blankets on top of them and still shivering in their own beds, people who are spending the day in bed.’

The chief of the National Pensioners’ Convention (NPC), Jan Shortt, said: ‘Rocketing cost-of-living, rampant energy prices, and the disastrous crisis in the NHS and social care will see tens of thousands more die if no action is taken.’

The UK’s public health agency has extended a Level 3 cold weather alert until Monday after overnight temperatures plunged as low as 10C in parts of the UK.

Officials warned the cold weather ‘could increase the health risks to vulnerable patients and disrupt the delivery of services’.

People struggling to afford their energy bills were urged to consult Simple Energy Advice for free advice on energy efficiency and grants to help keep up with payments.