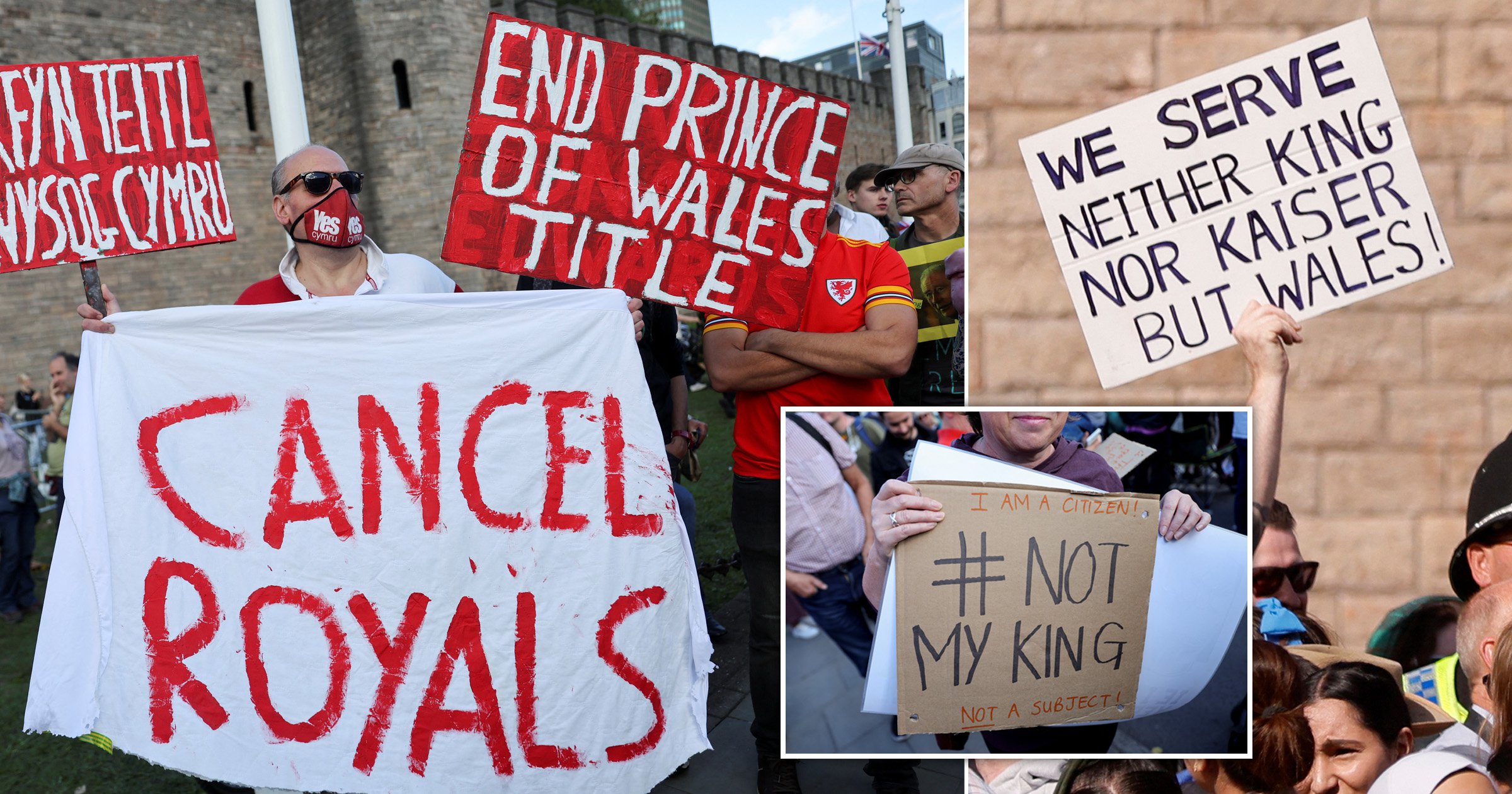 King Charles III was met by a chorus of boos from a group of anti-monarchists at Cardiff Castle today.

Thousands gathered outside the castle gates at 1pm today as Britain’s new king and Camilla, the Queen Consort, visited Wales for the first time.

But while many cheered and chanted ‘God save the King’, many others felt differently.

‘Cancel the royals’, ‘End Prince of Wales Title’ and ‘Pay Your Inheritance Tax!’ were among the placards held up high by republican campaigners.

Some carried giant Owain Glyndŵr flags, the last Welshman to be known as Prince of Wales.

Former Senedd Member for Plaid Cymru Bethan Sayed was among those in the crowds. She estimated around 300 people attended the pre-planned protest.

‘Why do we have a divine right of kings to rule over us? I want people to start thinking of what that means and how we can have a society free of a royal family,’ she told Metro.co.uk.

‘I think we wouldn’t potentially have been able to protest today had it not been for the fact that the King had announced his son William would become the new Prince of Wales so soon after the death of the queen.

‘I think that angered people,’ Mrs Sayed added, given that fewer than half of Welsh people wanted Prince William to inherit the title, according to a YouGov poll.

More than 25,000 people signed a petition calling for the Princes of Wales to be abolished this week.

Mrs Sayed added: ‘This is by no means the last you will see of us. We will plan to organise more in the future.

‘Democracy is such that we should be able to raise our voices and so we were able to do that today.’

Labour for an Independent Wales, which consists of members of the Labour Party, said protesters had vowed to stay silent but broke into ‘spontaneous’ boos when Charles’ motorcade arrived.

‘Such is the strength of feeling that we deserve the right to protest and we deserve better from our politics,’ it said.

The group said many campaigners felt emboldened to protest after a string of anti-monarchy protesters were arrested in Britain since Queen Elizabeth II’s death.

‘Having seen that people were arrested for protesting against the monarchy recently, we took the risk to protest today,’ the group said.

Adam Johannes, 43, who helped organise the protest, said he struggles with the idea that the public cannot choose their head of state.

‘Is it so we accept as natural, good and right unelected owners of multinational corporations?’ he said.

While Nick Ward, of pressure group Labour for Republic, said: ‘In a democracy, discussion about the monarchy is not something that should be shut down, it is a healthy public debate that should be encouraged.’

Charles’ trip to Wales began this morning then he arrived by helicopter from his Gloucestershire home of Highgrove.

His visit was announced to the nation with the booming sound of a gun salute fired from Cardiff Castle.

The King and the Queen Consort then travelled by state limousine to a service at Llandaff Cathedral at 11am.

For a time, conservation social scientist Dr Laura Thomas Walters was part of a one-woman protest against him as she stood outside Llandaff Cathedral.

‘People have that right and I think it will be exercised with restraint and it will be a footnote to the dominant feelings of the day,’ he told BBC Radio 4’s Today programme this morning.

During his visit to the Senedd, the King spoke in both English and Welsh.

‘Fel fy mam annwyl o’m blaen, rwy’n gwybod ein bod ni oll yn caru’r wlad arbennig hon.’ he added, which translates as ‘like my beloved mother before me, I know we all share a love for this special land’.

Following the death of the Queen, a number of Glyndŵr Day events were cancelled, touching off disappointment among some communities.