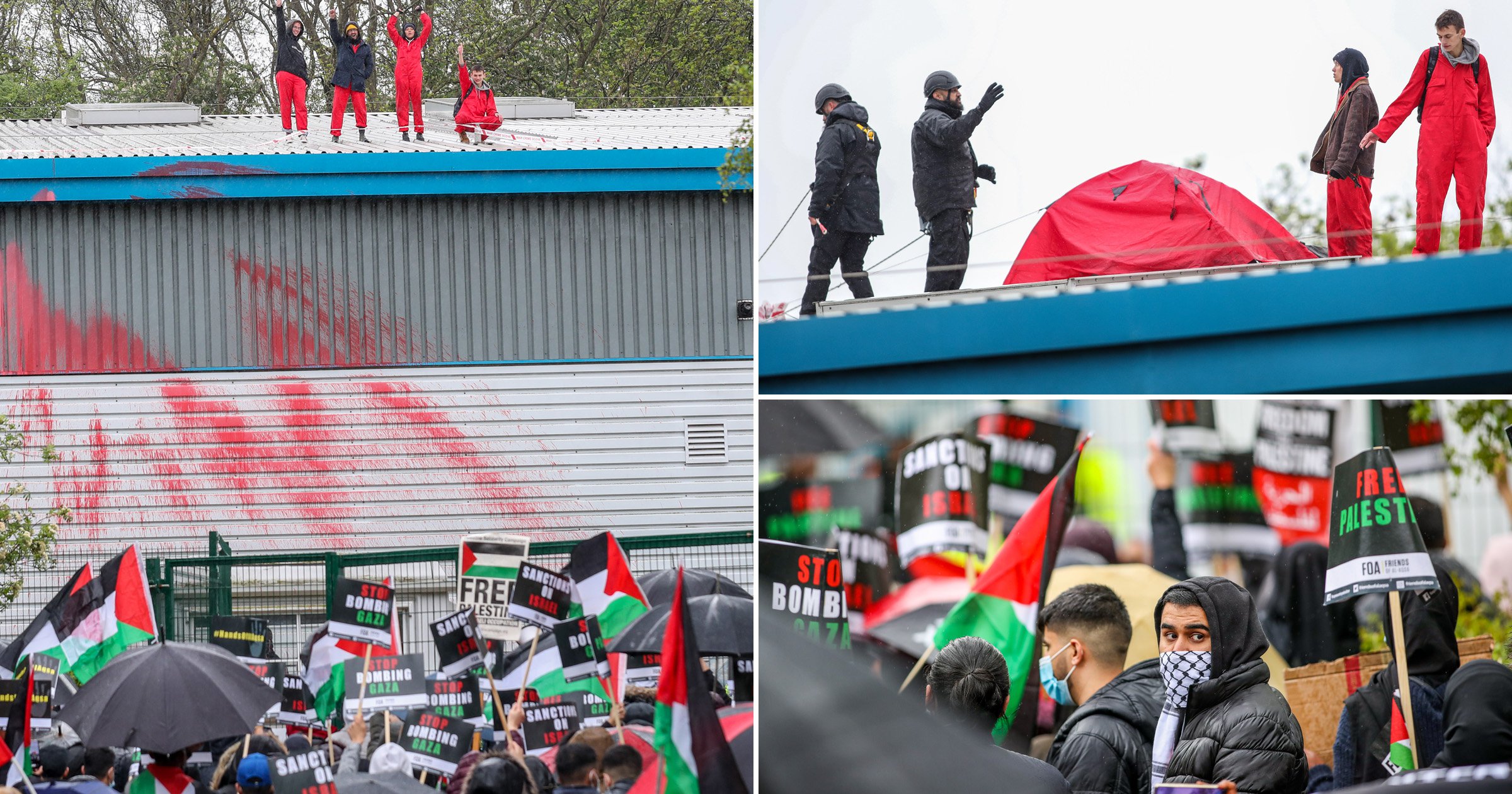 Pro-Palestine protesters who spent six days on the roof of a drone factory say supporters were arrested for trying to throw water to them.

The Palestine Action group say Leicestershire Police has failed in its duty of care by not ensuring demonstrators had enough food and water during the sit-in.

It goes one step further, suggesting this was a deliberate tactic to drive out protesters. Activists say people who tried to throw water and food up onto the roof were arrested for ‘aiding and abetting’.

On Friday two activists decided to come down in order to spread their rations further and were arrested, before officers raided their homes and seized ‘left-wing pamphlets’.

The factory ‘shut down’ culminated last night as a huge crowd of protesters kept the police at bay for six hours before the remaining two demonstrators were finally arrested.

Clashes on the ground saw protesters lob missiles at riot police — who were filmed shoving attendees and hitting them with their shields.

Palestine Action founder Huda Ammori told Metro.co.uk: ‘It’s a shock to a community to find out you’ve got an Israeli arms company who are making weapons, especially in the recent weeks when we’ve seen what’s happened to Palestinians in Gaza.

‘They’ve managed to hide in plain sight and they look like just another business on an industrial estate. 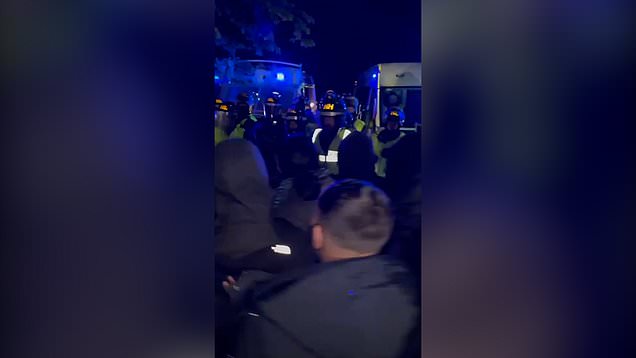 ‘When Palestine Action climbed onto the roof we almost immediately got such a positive response from the community of Leicester and there were tonnes of people outside within a few hours.

‘For it to come to light through this action, I think many people are quite shocked by that and find it disturbing that it’s happening in their community.’

Palestine Action has been campaigning against Elbit for supplying drones and other equipment to IDF, accusing the company of ‘terrorising the people of Gaza’ and ‘being complicit in war crimes’.

The IDF spent 11 days attacking Gaza this month after Hamas fired rockets into Israel in response to Israeli police storming Jerusalem’s Al-Aqsa mosque during the holy month of Ramadan.

A ceasefire was agreed on Thursday, but only after more than 240 Palestinians and 12 Israelis lost their lives.

Not only are drones used by Israel for surveillance purposes, they have also been used to drop tear gas on Palestinian protesters and have in the past been used to launch missiles. 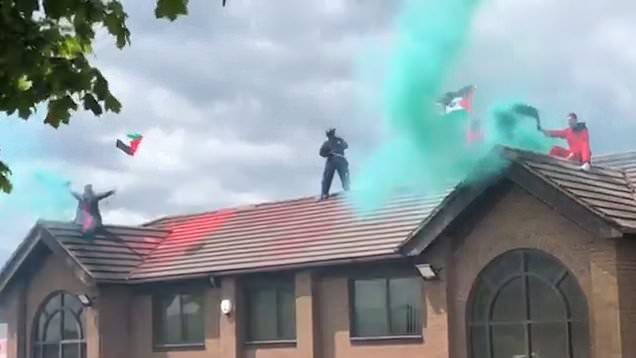 ‘Most people there, especially the children, are constantly traumatised, and then they hear these drones constantly,’ Ms Ammori added.

Part of the reason why protesters were able to stay on the roof for six days was because firefighters refused to help police remove them, Palestine Action say.

Leicestershire Fire and Rescue were initially called to ensure people’s safety but left after an intervention from the Fire Brigade Union.

In a statement, it said: ‘Union Officials immediately reminded Senior Managers that as firefighters, we are, and remain, a proud humanitarian service and our role does not involve law enforcement.

‘Once the safety of those involved had been confirmed, Fire Brigades Union members withdrew from the incident.’

Leicestershire Brigade chairman Graham Vaux added that ‘the Fire Brigades Union stand in support of Palestinian solidarity and the right to protest’.

Yesterday evening the crowd that had amassed in front of the factory entrance were calling for an ambulance to be sent in first because the protesters hadn’t had enough water, according to Palestine Action.

The group says two people who tried to supply food and water were arrested for aiding and abetting aggravated trespass on Friday. A 27-year-old man was detained under the same offence on Monday.

Ms Ammori added: ‘How is that a crime? Just trying to provide people with water?

‘They had been in some extreme weather conditions, it was stormy, it was rainy, they’d had a lack of water.’

When asked if the group has plans for near-future, Ms Ammori said: ‘We’ve occupied Elbit’s factories in the past and we’re only growing as a movement and we plan to continue occupying and shutting down Elbit sites until they’re gone for good’.

In a statement released this morning Leicestershire Police said three people had been arrested for aiding and abetting aggravated trespass.

But when asked by Metro.co.uk if this was because they were trying to supply water, the force declined to comment.

After coming down from the roof yesterday, a 43-year-old man from London and a 20-year-old of no fixed abode were both arrested for conspiracy to commit criminal damage and aggravated trespass, police confirmed.

The force said the two protesters arrested on Friday – a 21-year-old woman from Cheshire and an 18-year-old man from Burton – have since been bailed.

Assistant Chief Constable Kerry Smith, who was Gold Commander on the policing operation, said: ‘We are pleased that this has come to a conclusion and all of the protesters have been brought down safely from the roof. We have had negotiators working around the clock to engage with them.

‘We support the right to protest, which is a fundamental human right, however this must be done legally. Criminal damage such as we have seen here cannot be ignored and as such it is only right that the protesters have been arrested.

‘It was disappointing that a small minority chose to become violent towards the end of this protest, injuring two police officers in the process.’