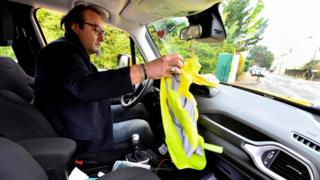 Drivers plan to disrupt traffic across France on Saturday by blocking roads, bridges and toll booths in a mass protest at rising fuel prices.

Dubbed the “yellow vests” after the high-visibility jackets they use as their symbol, they are expected to muster in at least 700 locations.

They accuse President Emmanuel Macron of abandoning “the little people”.

Mr Macron admitted this week that he had not “really managed to reconcile the French people with its leaders”.

Nonetheless, he accused his political opponents of hijacking the movement in order to block his reform programme.

Officials have warned that, while they will not stop the protests, they will not allow them to bring the French road network to a standstill.

Why are drivers on the warpath?

World oil prices did rise before falling back again but the Macron government raised its hydrocarbon tax this year by 7.6 cents per litre on diesel and 3.9 cents on petrol, as part of a campaign for cleaner cars and fuel.

The decision to impose a further increase of 6.5 cents on diesel and 2.9 cents on petrol on 1 January 2019 was seen as the final straw.

Speaking on Wednesday, the president blamed world oil prices for three-quarters of the price rise. Interior Minister Christopher Castaner argued that the fall in world oil prices would compensate for the tax increase.

District nurse Philippe Salmon, who backed Mr Macron in last year’s presidential election, is now a passionate “yellow vest”, AFP news agency reports, who drives around in a yellow car in the Gironde region as if to prove his point.

“The president says he is de-taxing work but what’s going on for all those who need a car for work?” he asked earlier this week.

Mr Salmon, who says he never went on a demonstration before, predicts that tractors will be blocking roads in the Bordeaux area on Saturday.

Yellow Vests tried to protest last week when President Macron visited the northern town of Albert, and were moved on by police.

How big is the movement?

News of the protest has spread so fast on Facebook and Twitter that new muster points seem to appear daily as people share hash tags such as #GiletsJaunes (Yellow Vests) and #17novembre.

Demonstrators are threatening to block motorways and access roads to some oil depots, including in Calais near the Channel Tunnel, Reuters news agency reports.

One less disruptive tactic being suggested is to cover speed cameras with bin bags.

At the same time, many protest supporters were planning to turn out merely to show their high-visibility jackets.

According to Le Monde newspaper, nobody can really tell how big the protest will be. However, groups of protesters appeared outside fuel depots in French-speaking areas of Belgium on Friday, ahead of the French action.

They have certainly tried to tap into it. Far-right leader Marine Le Pen, who was defeated by Mr Macron in the second round of the presidential election, has been encouraging the movement on Twitter.

She said: “The government shouldn’t be afraid of French people who come to express their revolt and do it in a peaceful fashion.”

Laurent Wauquiez, leader of the centre-right Republicans, called on the Macron government to scrap the next planned increase in carbon tax on fossil fuels in January to offset rising vehicle fuel prices.

Mr Castaner has described Saturday’s action as a “political protest with the Republicans behind it”.

On the radical left of French politics, Jean-Luc Mélenchon predicted that Saturday would be “divorce day for the French people” and the Macron project.

However, the movement has no single leader and is not organised by any trade union.

For Philippe Salmon, the district nurse who can clock up 200km (124 miles) a day in his work, “taxes go beyond political differences”.

Being a Yellow Vest has not, he says, converted him to the far right or populism.

Is there any room for compromise?

On Wednesday, the government announced action to help poor families pay their energy and transport bills.

A state scrappage bonus on polluting vehicles would also be doubled for France’s poorest families, he said, and fuel tax credits would be brought in for people who depend on their cars for work.

However, President Macron defended the tax on diesel, saying: “We have to tax fossil fuels more in order to fund our investments in renewable.”

Meanwhile, as potentially the biggest protest of his presidency gathers steam, protesters mock him relentlessly as “Micron” or “Macaron” (Macaroon) or simply Manu, the short form of Emmanuel, for which he famously scolded a student for using.