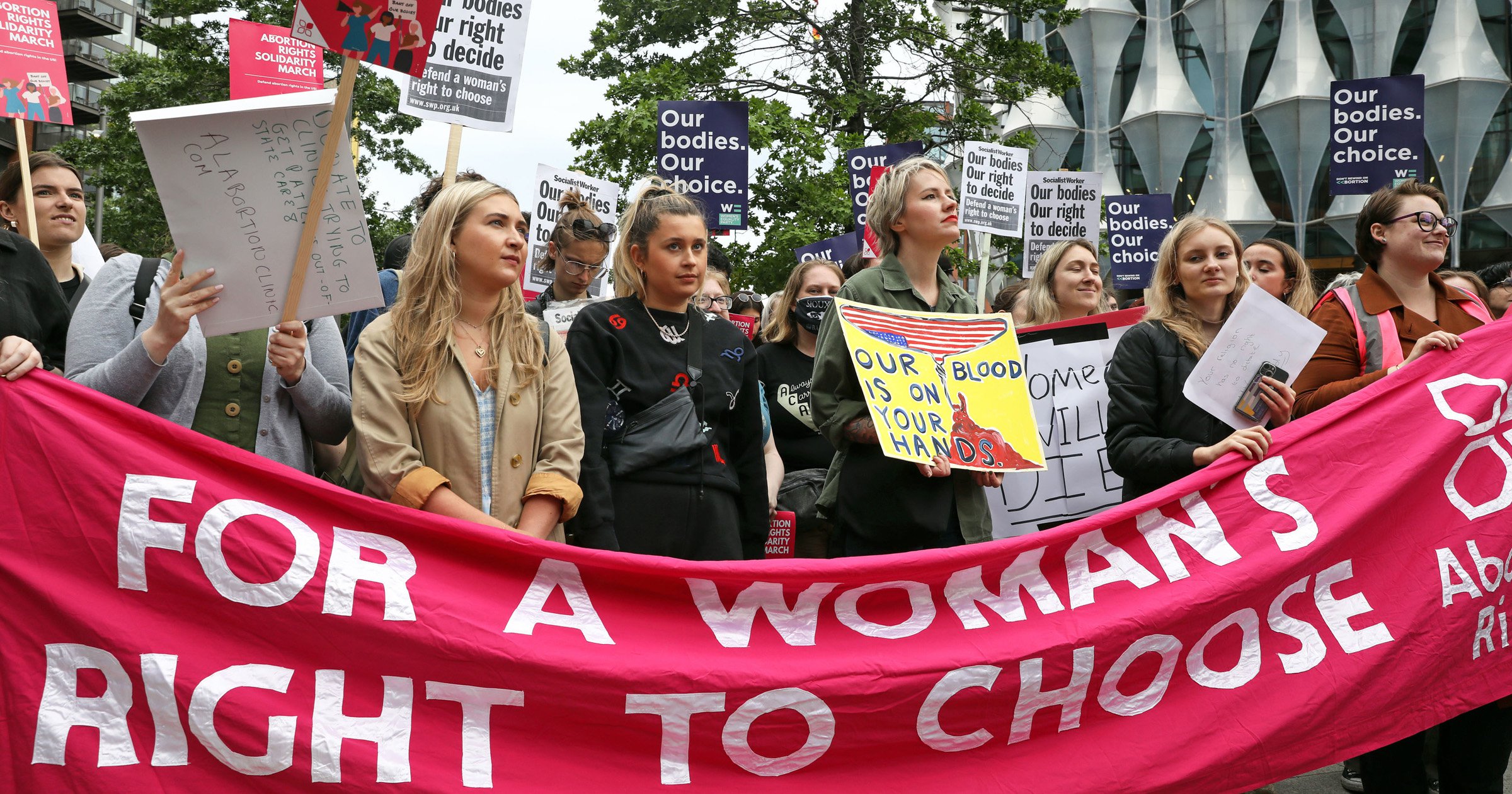 Protests have taken place across the UK after the ‘devastating’ decision to scrap the right to abortion in more than half of the states in the US.

At a protest outside the United States embassy in Vauxhall, London, crowds were dressed in costumes and holding signs reading ‘Our bodies, Our choice’.

One attendee arrived wearing a costume from the dystopian novel and TV series, The Handmaid’s Tale, in which society is ruled by a fundamentalist regime that treats women as property.

Another, Esme Trevelyan, 25, said: ‘Obviously we’re in London, there’s not lots we can do but being here outside the American embassy is just a message of solidarity, I guess, towards American women because, although it seems like it’s not a problem here, America is the most powerful country in the world, one of the most rich countries in the world, if it can happen there, surely it can happen anywhere.’

Jessica Cappi, 25, added: ‘At 4:15pm today we all got the notification on our phones and thought “this is the end of something” and we wanted to come out and fight for it and to make our voices heard I just feel so angry for women everywhere that we could regress.

‘I saw a statistic today that was the US was one of four countries that are actually going backwards on abortion rights. So I hopped on the train and 45 minutes later, here I am.’

Wen-Wen Lindroth, UK chairwoman of Democrats Abroad, the official organisation of the Democrat party for US citizens living overseas, said it was a ‘momentous and sad day for the United States’.

Speaking at the protest, she said: ‘I’m about the same age as Roe v Wade and, you know, I think a lot of women of my generation, we just took it for granted that the struggle for women’s rights, you know, had come a very long way – maybe not all the way – but this was certainly one of the fundamental decisions that, you know, underlies our sense of equality in the US.

‘So to have it taken way is very meaningful and it will impact women, you know, of older generations, of younger generations certainly, and it’s just something that we’re going to need to address politically and find a way to turn back.’

Prime Minister Boris Johnson described it as a ‘big step backwards’, and hundreds took to the streets of London and Edinburgh to demonstrate against the decision.

Judith Orr, vice chairwoman of campaign group Abortion Rights, which claims to have organised the demonstration, said protesters were ‘full of rage and anger’.

In the Scottish capital, pro-choice campaigners and MSPs gathered outside the US consulate.

‘The right of women to make their own decisions about their own bodies is a fundamental human right.’

The SNP’s Nicola Sturgeon said it will embolden anti-abortion and anti-women forces in other countries too.

The British Pregnancy Advisory Service (Bpas), the UK’s leading abortion provider, said it is ‘appalled’ and called on the UK Government to publicly condemn the ‘assault on women’s human rights’.

However, the charity Christian Action Research and Education (Care) welcomed the decision, saying ‘the most compassionate societies esteem and protect’ both mothers and babies.

Spokeswoman for the Right To Life UK group, Catherine Robinson, said the ruling overturns ‘an unjust law’ and is the ‘beginning of the legislative battle over abortion, certainly not the end’.