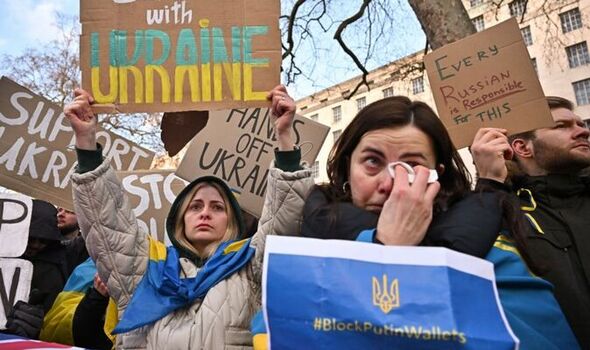 They draped themselves in the national colours and waved their flag as they brandished banners portraying the Moscow leader as a blood-soaked clone of Hitler.

Women wept as more than 400 demonstrators gathered outside Downing Street to demand tougher sanctions against Russia and military support for Kiev. Up to 100 more demonstrated at the Russian embassy in nearby Kensington.

The mood was reflected across the world where anti-war activists took to the streets in protest about the conflict in Ukraine.

They converged in Paris, New York, Berlin, Stockholm, Tokyo, Sydney and Istanbul. In Moscow and St Petersburg protesters chanted: “No to war!”

Alexander Belov, in the Russian capital, said he believed Putin had “lost his mind” and added: “I thought we would never see a war like this in the 21st century. It turns out we live in the middle ages.”

In London, expats and second genera- tion British Ukrainians said family and friends were being bombed during the Kremlin’s advance.

One branch of the family is trying to escape via severely disrupted train services while another had taken refuge in the Carpathian mountains. He added: “It was not like this in 2014 – this is real war. Then it was localised in east Ukraine, now it is everywhere. We want severe sanctions. This will only stop when the Russians understand their losses are extreme.”

Chrystyna Chymera-Holloway, who grew up in Leeds, said her relatives in Sumy, on the Ukraine-Russian border, could hear bullets and explosions.

The 37-year-old said outside Downing Street: “It’s unreal. They live in a high-rise flat and they can’t leave. Their mum has a passport and a visa to come to the UK, the dad is housebound, ill, and the grandmother in a village, blind – refuses to leave.They can hear gunshots and explosions already.

“Yesterday, they were sending the kids to school with stickers showing their blood groups.” The mother-of-two, who lives in Walthamstow, East London, added: “They are resolute – no one is taking their country.”

Chrystyna added: “We really need to isolate Russia financially – stop them trading in the pound, the dollar and Euro. We need to really tackle Russian oligarchs in London because they have a free haven. They are having the best life in London while their leader is annihilating our country.”

Uber driver Vasyl Chyk, 27, who grew up in Ivano-Frankivsk, west Ukraine, but now lives in east London, said: “This morning the airport in my town was bombed by air strike.

“I am here to stand up for my nation. We will stand against Putin. This has been happening since 2014 but not on this scale – a full invasion in the 21st century. It is horrible – like a reminder of 1939.” Expat Viacheslav Semeniuk, 39, from Leeds, felt helpless over the safety of his parents, in their sixties, inVinnytsia, west Ukraine.

He said: “My mum lives in a small town next to a military base and they woke this morning to a huge explosion and the whole house shaking. She was very frightened.”

A Russian national who gave her name only as Anna, said: “I am here to protest against these actions. I woke up in tears.”

More than £50,000 has been raised through the Help Ukraine Emergency Appeal, organised by churches.

Iryna Terlecky, chair of the Association of Ukrainian Women in Great Britain, said: “People have been very generous and especially today there’s been a flood of new donations coming in, large and small.” ? The UK Foreign Office has warned that British nationals in Ukraine “should not expect increased consular support or help with evacuating” after flights between the UK and Ukraine were suspended.