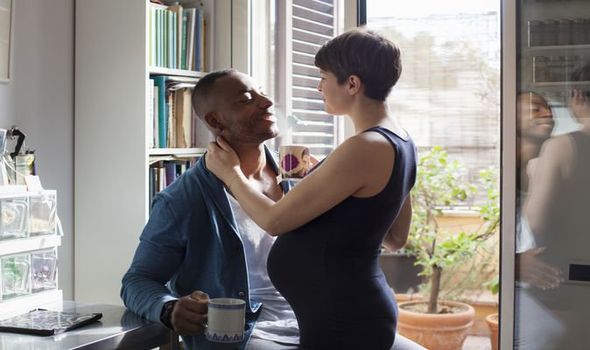 The guidance for mums-to-be on Public Health England’s Start4Life guide said at 22 weeks it is a “good week to make a fuss of your partner” who might get “a bit overlooked”. It suggested cooking a special meal – and included a link to recipes for fruit crumble, fish and chips and curry, among others.

More advice on the NHS website, in a page about coping with pelvic pain, states women should “get help with household chores from your partner, family and friends”.

Joeli Brearley, founder of campaign group Pregnant and Screwed, shared her fury over the now-deleted advice which she says “perpetuates negative gender stereotypes”.

The mum-of-two, from York, said in a Facebook post: “Lots of debate about these two bits of advice. The first says that pregnant women with pelvic floor pain should get ‘help’ from their partner suggesting that the housework is a woman’s responsibility.

“Yes, we know that women do 60 percent more of the domestic labour (including almost three times the caring) so it is likely that most women will have to ask for help but phrasing it this way only entrenches and perpetuates that gender stereotype, thereby ensuring women continue to do the lion’s share of the housework.

“Also, many dads and partners don’t want to be reduced to a ‘helper’, they want to be equal partners in the raising of their kids.”

She went on to say that the second piece of advice about “making a fuss” of partners  made her “gasp”. She continued: “The website suggests women should make their partner a fancy meal to ensure they don’t feel left out!

“If your partner feels ‘overlooked’ because you are pregnant, then they might want to consider paying for their own counselling.”

Hundreds of people agreed with Ms Brearley, saying the advice made their “jaw drop”, with another adding: “Did we just timehop to the 1950s?”

One wrote: “I couldn’t enter the kitchen for most of my pregnancy for fear of throwing up. Not sure how I would have managed to cook a fancy meal.”

Another said: “That is so bad! Oh, bless the poor bloke not being pregnant, what a hardship for him.”

However, other users disagreed with Ms Brearley’s comments with one saying: “My husband has been amazing through this whole pregnancy and has taken on his role as both emotional and physical supporter. But it is important that I still check in with him so he doesn’t feel under too much pressure either.

“So, actually I do cook him a nice meal, because I want him to know how much I appreciate everything he is doing. As much as he appreciates everything I’m doing growing a baby. So maybe this is worded wrong, but the ethos is valid.”

In response to the criticism, a Public Health England spokesperson told Express.co.uk: “This wording is out of date and has now been changed. We recognise it is not appropriate and we apologise. We would encourage all pregnant women to seek help if they need it both physically and emotionally.”