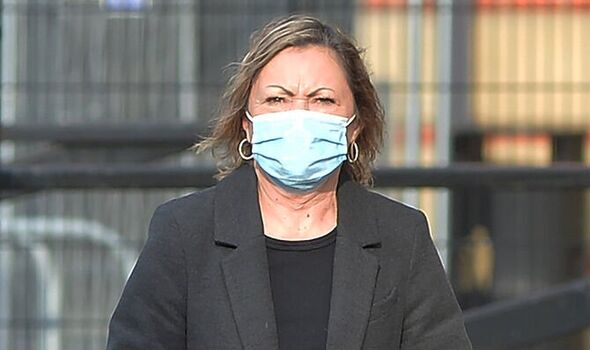 Rebecca Leveridge, 52, walked free from court last week with a suspended sentence, despite years of dishonesty by “siphoning off” nearly £25,000 of Danny Gray’s money. Mr Gray’s two sons and his sister were “shocked” at the sentence as Leveridge, who had been with Mr Gray for 20 years despite never marrying, deliberately failed to tell him a lump sum of more than £30,000 was paid into his account, along with a £595 monthly allowance – after he was diagnosed with terminal cancer.

The shameless gran actively spent thousands behind his back – even telling him he did not have enough cash for his beloved pet dog’s veterinary treatment.

Mr Gray died, aged 60, in September 2020, coincidentally the day before the bank refunded his losses.

Speaking to Leicestershire Live today, Sean said: “Leveridge was very manipulative of dad and she never made us welcome when visiting. She was always claiming they were in poverty.

“We were shocked at the leniency of the sentence. We can never forgive her for this greed and pure selfishness. It was callous trickery.

“He was a frail and dying man. He was too nice, too trusting and she took advantage of his good nature.

“She said she was sorry in court, but it’s far too late for that, it means nothing. It’s shaken our whole family, including my grandparents who are in their mid-80s.”

We were shocked at the leniency of the sentence. We can never forgive her for this greed and pure selfishness

Mr Gray, from Enderby, Leicestershire, trusted his spouse with his finances while undergoing chemotherapy when they were living together.

The former lorry driver and mechanic gave her £5,000 to safeguard for his funeral, which she also spent. Mr Gray’s sister, Diane, investigated and discovered Leveridge’s criminality.

Leveridge was reported to the police in 2019. The retail worker moved out of Mr Gray’s home and went to live in Croft, Leicestershire.

The gran admitted theft, by siphoning £24,700 of Danny’s pension fund into her own account, in numerous transactions.

She also admitted defrauding him out of the £5,000 funeral cash, later giving him back less than half of it.

But Sean Gray continued: “Dad should have been enjoying his final years worry-free, instead of selling his possessions – as she callously stood by and watched.

“He sold his classic TVR car and a truck. He was stressed about having to make ends meet. Had he known he had thousands in the bank he might even have gone away on a nice holiday.”

Kim, 33, said: “It was a shock when we found out what Becca (Leveridge) had been up to.

“She thought no one would figure out what she doing. The sentence was nothing more than a slap on the wrist, she walked off Scot free.

“I’ve no faith in the justice system. I’d like to ask her why she did this to the man she was supposed to love and care about?

“It was a cruel and nasty trick. She gave Danny money worries that he shouldn’t have had.

“Danny would have done everything for her, he was so kind. When she (Leveridge) left we could enjoy special family occasions, memories to treasure – although Danny was heartbroken about losing contact with her daughters. He was extremely fond of them and helped bring them up.”

Lee, of East Goscote, Leicestershire, said: “This betrayal is as bad as it gets. Dad was distraught at finding out. But he was happy and relieved when she moved out. His friends started coming round again, as they weren’t welcome before and he had a bit more of a life.

“The sentence was a joke. The punishment did not fit the crime, she should have gone down for being a con artist. She’s a nasty piece of work to have done what she did to my dad.”

And Diane, 57, who uncovered the dishonesty, said: “I’m worn down by all of this, I haven’t been able to grieve yet. We’re all devastated.

“Danny wrongly thought he had no money coming in but by the time we found out, she’d spent it. My brother really suffered, finding out she didn’t care and had fed him a pack of lies.

“It was a huge betrayal of trust. We can’t forgive her. She made out she loved him and all the time she was stealing from him.

“Rebecca encouraged us to keep our distance and now we know why. Danny was a proud man and just wanted to pay his way.

“He didn’t think he could afford the vet’s treatment for his adored 13-year-old Old Tyme Bulldog, Bella, who died a few months after Danny. Rebecca repeatedly lied, telling him he had no money to pay the vet. She never liked the dog.”

Leicester Crown Court heard Leveridge has no assets that can be confiscated.

Judge Ebrahim Mooncey ordered her to pay £2,000 towards compensating Barclays, who covered all the losses.

The court heard she frittered Danny’s money away on everyday expenses rather than big-ticket items.