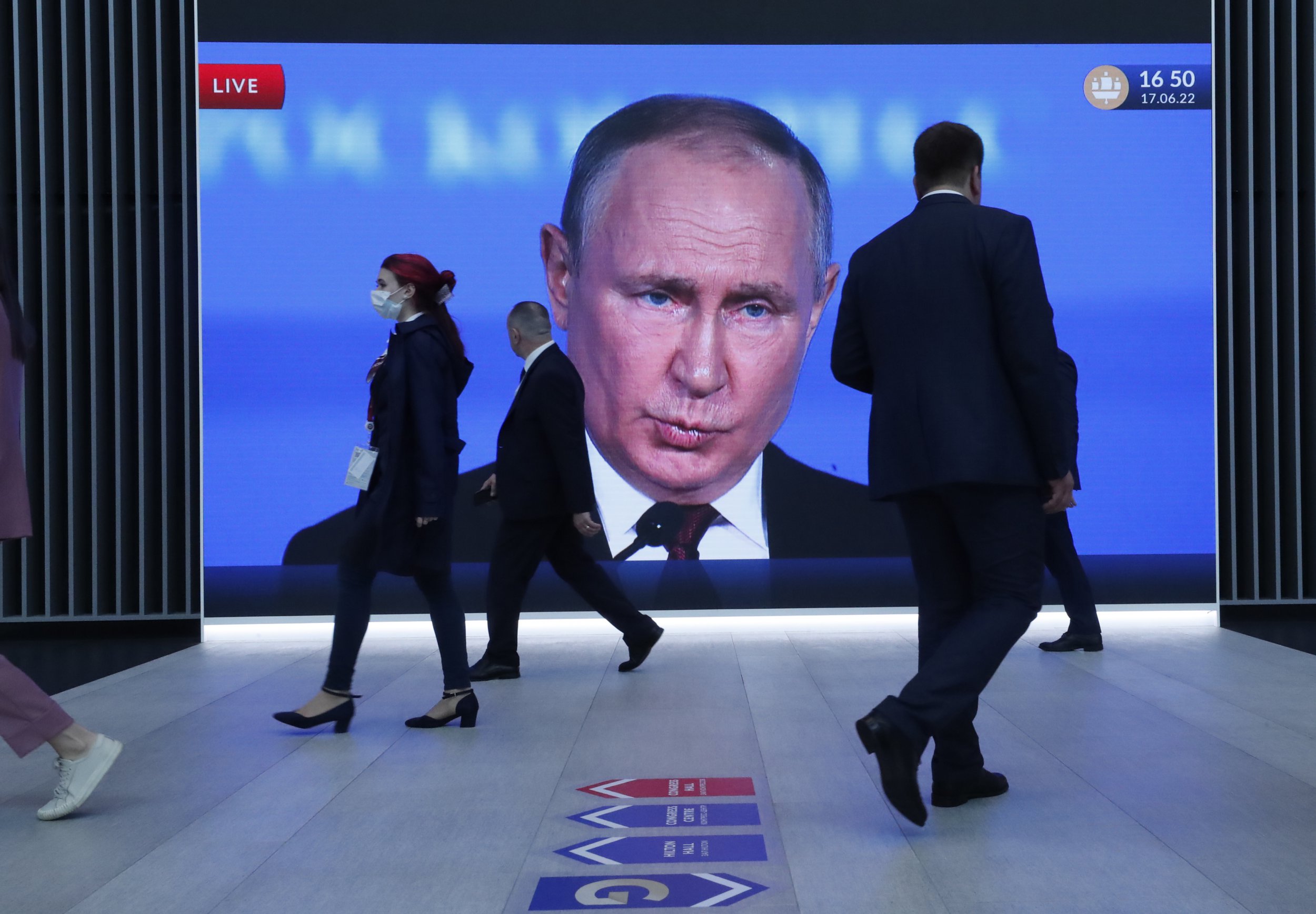 Vladimir Putin accused the US of playing God and brushed off the West’s ‘blitzkrieg’ of sanctions in a fiery speech delivered in his hometown.

Speaking at an economic forum in St Petersburg on Friday, the Russian president warned ‘nothing will be as it used to be’ as he asserted his country’s strength and resilience.

He said: ‘We are strong people and can cope with any challenge. Like our ancestors, we will solve any problem, the entire thousand-year history of our country speaks of this.’

Putin also commented on rumours concerning his apparently failing health, joking during a Q&A: ‘Like Mark Twain once said, “The rumours about my death were greatly exaggerated”.’

The 69-year-old said the United States considered itself ‘God’s emissary on Earth’, and that Russia was taking its place in a new world order whose rules would be set by ‘strong and sovereign states’.

‘If they are exceptional, then that means that everyone else is second class,’ he said of the US. ‘They live in the past on their own under their own delusions.’

The tyrant drew applause when he vowed to press on with his ‘special military operation’ in Ukraine, insisting the decision to invade ‘was forced – difficult, of course, but forced and necessary’.

He called the campaign in Ukraine the action of a ‘sovereign country that has the right to defend its security’, and accused the West of ‘active military appropriation of Ukrainian territory’.

But he appeared to acknowledge the scale of destruction being wrought, while absolving Russian forces.

In a two-hour Q&A session after his speech, he evoked Stalingrad, the Soviet city razed during fierce fighting with the Nazis during World War Two, now renamed Volgograd.

‘We must not turn those cities and towns that we liberate into a semblance of Stalingrad,’ he said.

‘This is a natural thing that our military thinks about when organising hostilities.’

Ukraine says Russian forces are responsible for thousands of civilian deaths, the obliteration of towns such as Mariupol, and the displacement of a third of its peacetime population.

Russia denies attacking civilian targets, and says allegations that it has perpetrated war crimes are based on Ukrainian and Western fabrications.

Putin’s speech was delayed by an hour due to a cyber-attack which disabled the forum’s accreditation and admission systems.

When he eventually took to the stage, the Kremlin leader insisted his country’s economy was capable of overcoming ‘reckless and insane’ sanctions.

He also issued a thinly-veiled threat to any oligarchs thinking of quitting his regime, warning: ‘It’s safer in your own house.

‘Those who didn’t want to listen to this have lost millions abroad.’

Ending on an ominous note, Putin warned: ‘Russia is entering a new era as a powerful, sovereign country, and will become even stronger.

‘Only strong and sovereign states can have a say in this emerging world order, or are doomed to become colonies.’