Vladimir Putin has approved the deployment of a deadly flamethrower known as a ‘poor man’s nuclear weapon’ to his private army.

The TOS-1A Solntsepek heavy thermobaric flamethrower is designed for the complete destruction of fortifications, armoured vehicles and enemy manpower – obliterating all humans in the vicinity.

The weapon is capable of vaporising everything within a 1,000ft blast radius, rupturing lungs and leaving no hope of survival with a blast temperature as high as 3,000°C.

Thermobaric ammunition has been described as ‘the most terrible [conventional] weapon in the world’, and has been dubbed ‘a poor man’s nuclear weapon’ by retired US colonel David Johnson.

The deadly ammunition can either be dropped from the air, or loaded into a rocket and used as artillery.

Now video footage has emerged of the weapon being used in Ukraine by the ragtag members of the Wagner Group, a Russian army of far-right mercenaries loyal to Putin.

The horrifying video, captured by a nearby drone, shows Wagner troops using the artillery version of the weapon to hit Ukrainian forces in Artemovsk and its suburbs, according to state media outlet RIA Novosti.

The first explosive charge opens the container and scatters fuel mixture as a deadly cloud, creating an incendiary mist which penetrates any gaps in buildings or unsealed defences. 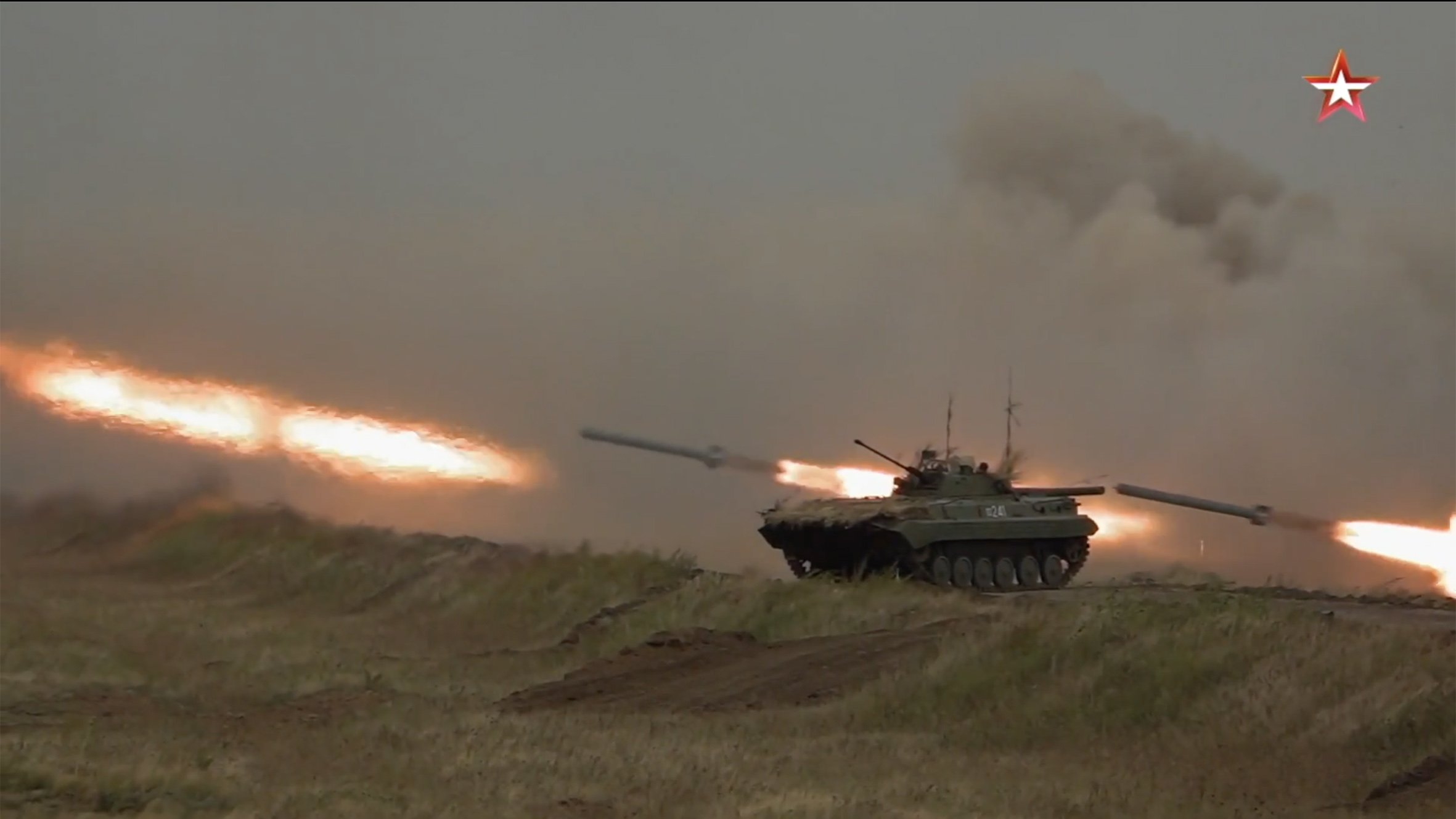 A second charge then detonates the fuel cloud, triggering a huge fireball, a massive blast wave, and a vacuum which sucks up all surrounding oxygen.

Victims of the horrific weapon can die from the blast or the accompanying shock wave, while the subsequent vacuum causes victims to die painfully by rupturing their lungs.

The deadly weapon has ‘shown its worth’ in Ukraine, boasted the 38-minute Zvezda TV report.

Its warhead was produced in a secret laboratory called the Institute of Applied Chemistry in Sergiev Posad, Moscow region.

A source told ultra-loyalist news outlet RIA FAN: ‘These weapons are considered the most terrible, there are no analogues in any country in the world.

‘The Americans even tried to ban it, not because it really is a weapon of mass destruction, but because the Americans can’t do anything like that.’

Wagner is headed by billionaire Yevgeny Prigozhin, a notorious war criminal and one of Putin’s closest allies.

Estimates say it has up to 35,000 prisoners fighting in the war in Ukraine, or in training for the conflict.

When asked what his recruits should do with Ukrainian captives, Prigozhin responded by saying ‘Do whatever you like to them – torture them, or slit their throats.’

Separately he was quoted saying: ‘I have special powers from the President [Putin].

Earlier this week, Prigozhin was reported as saying that he wanted to create a separate division in Wagner for prisoners who had been raped in jail to ensure that other convict soldiers did not have to serve with such ‘untouchable outcasts’.

He also hit out at the poor performance of Putin’s regular forces.

An inmate told how during a jail recruitment session, Prigozhin said ‘the defence ministry’s army is totally useless’.

Its troops ‘drink, take drugs, and don’t want to fight’.

‘They present their defeats as ‘regroupings’, while [Wagner] are doing well,’ the convict said.

‘This is why he now needs people jailed for murder and robbery.

‘He said he would likely be back for the rapists in November.’