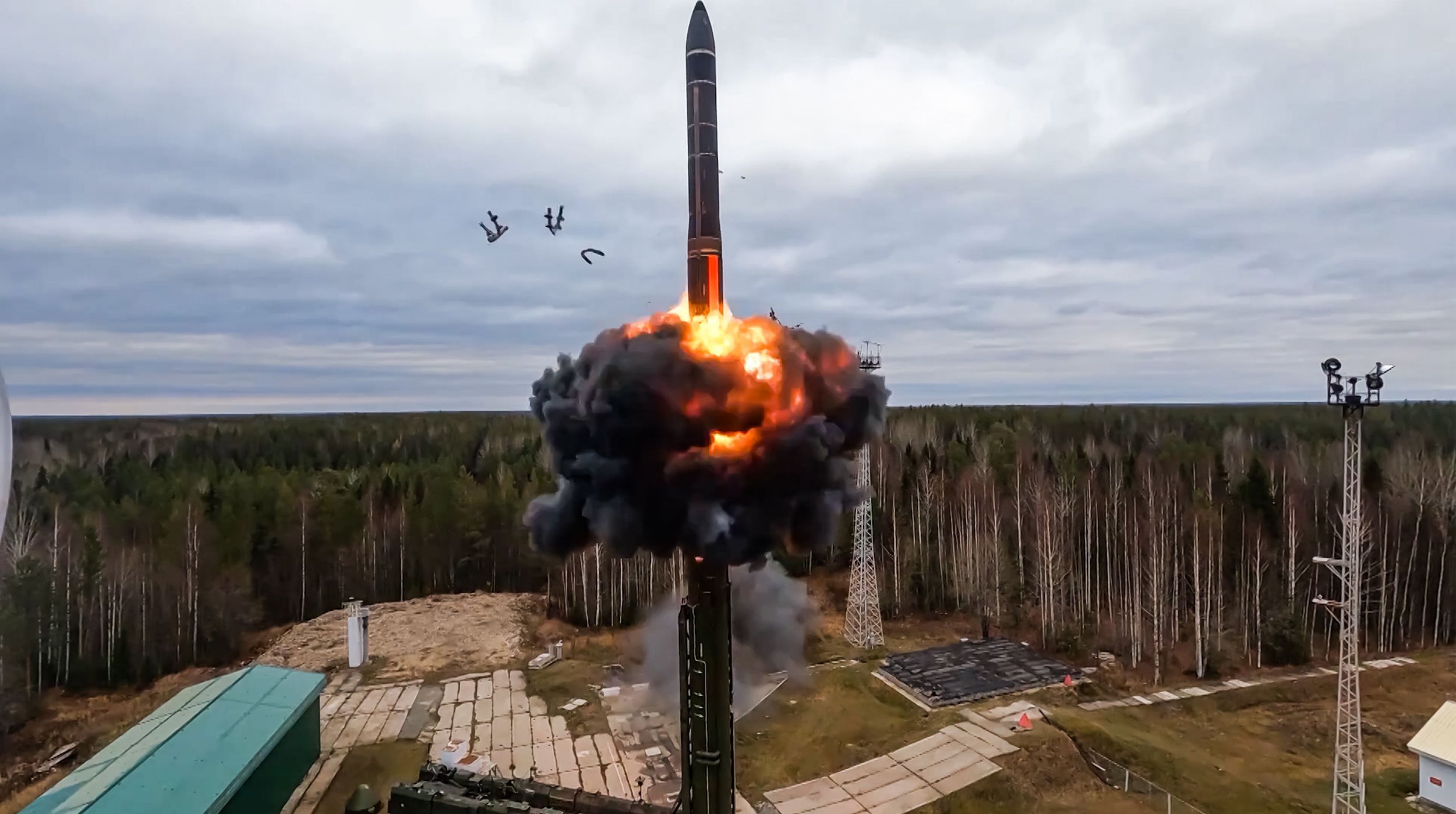 Vladimir Putin appears to have renewed his nuclear threat against the West by readying a strategic missile capable of striking the UK and US for combat use.

Video footage shows the huge Yars rocket being installed into a silo at a military compound just outside Moscow.

Putin was seen in late October overseeing the launch of a similar missile in a mock response to a potential nuclear attack by the West amid high tension in the war with Ukraine.

Russia is building up to more nuclear showboating as it prepares to mark the annual Strategic Missile Forces Day on December 17.

The Yars intercontinental ballistic missile, which has a range of 7,500 miles, was installed in a silo launch pad using a special transport and loading unit.

Division commander Col. Alexei Sokolov made clear the exercise was aimed at sending a message to the West, with both the UK and US within range.

‘The importance of this operation lies in the fact that the next missile will be put on combat duty on schedule,’ he said.

‘The homeland will get another nuclear missile weapon, which will make it possible to solve any tasks at the strategic level.’

Combat engineer Vadim Vyazovsky told TV Zvezda, the Russian defence ministry’s own channel: ‘I feel proud of Russia that my country is putting such products into service so that the Motherland can sleep well.’

The Kozelsk missile is undergoing modernisation and a revamp, according to reports.

The Yars is a modification of the Topol-M missile system, and was first deployed in 2009.

The Russian president typically uses the year-end ritual to polish his image, answering a wide range of questions on domestic and foreign policy to demonstrate his grip on details and give the semblance of openness even though the event is tightly stage-managed.

But this year, with his troops on the back foot in Ukraine, it could be impossible to avoid uncomfortable questions about the Russian military’s blunders even at a highly choreographed event.

Putin also has canceled another annual fixture this year, a televised call-in show in which he takes questions from the public to nurture his father-of-the-nation image.

And he has so far failed to deliver the annual televised state-of-the-nation address to parliament, a constitutional obligation. No date has been set for Putin’s address.

The Kremlin has muzzled any criticism of its invasion of Ukraine from the liberal anti-war camp, shutting independent media outlets and criminalising the spread of any information that differs from the official view — including calling the campaign a war.

But it has faced an increasingly vocal criticism from Russian hardliners, who have denounced the president as weak and indecisive and called for ramping up strikes on Ukraine.

The development came as it emerged George Orwell’s dystopian novel ‘1984’, set in an imagined future where totalitarian rulers deprive their citizens of all agency in order to maintain support for senseless wars, has topped electronic bestseller lists in Russia.

The novel is the most popular fiction download of 2022 with Russian online bookseller LitRes, and the second most popular download in any category, the state news agency Tass reported on Tuesday.

The novel was published in 1949, when Nazism had just been defeated and the West’s Cold War with its erstwhile ally Josef Stalin and the Soviet communist bloc he now led was just beginning.

It was banned in the Soviet Union until 1988.

Orwell said he had used Stalin’s dictatorship as a model for the personality cult of the all-seeing Big Brother, whose ‘thought police’ force cowed citizens to engage in ‘doublethink’ in order to believe that ‘War is peace, freedom is slavery’.

But some see contemporary echoes in the rule of Putin, who has eradicated political opposition and critical media from the public sphere in his two decades in power, as well as rehabilitating the memory of Stalin.