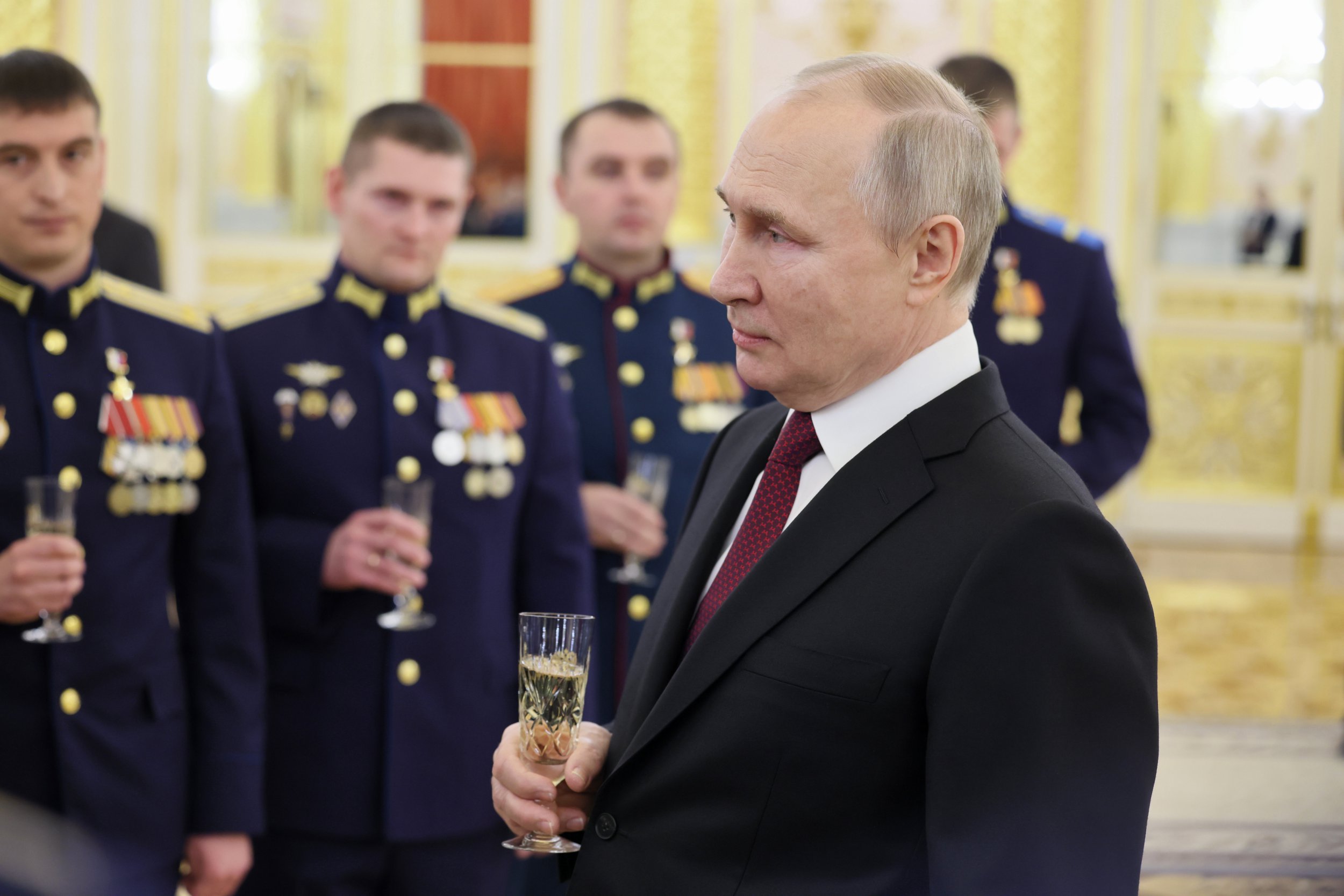 Vladimir Putin has claimed Ukraine “started it” while attempting to justify Russia’s attacks on its neighbour’s energy infrastructure.

The Russian president made the claim while drinking champagne at a glitzy Kremlin reception for servicemen called ‘Heroes of Russia’ on Thursday.

He pointed to the bombing of a Russian-held bridge to Crimea despite Russia having invaded Ukraine in February in a war that has killed thousands.

He said: ‘There is a lot of noise now about our strikes on the energy infrastructure [of Ukraine]. Yes, we are doing it.

‘But who started it? Who struck the Crimean bridge?’

Russia is seeking to cut off Ukraine’s energy supplies and destroy infrastructure as winter approaches with missile attacks.

Ukraine said Russia destroyed homes in the southeast and knocked out power in many areas with a new volley of missiles on Monday, while Moscow said Ukrainian drones had attacked two air bases deep inside Russia hundreds of miles from front lines.

A new missile barrage had been anticipated in Ukraine for days and it took place just as emergency blackouts were due to end, with previous damage repaired.

The strikes plunged parts of Ukraine back into freezing darkness with temperatures now firmly below zero Celsius.

Putin was speaking prior to today’s annual memorial day in Russia called  ‘Heroes of the Fatherland Day’ to commemorate the country’s soldiers.

He added Russia would not be prevented from ‘from fulfilling our military objectives’ despite outrage or what he described as ‘information wars’ against Russia.

Meanwhile, Putin on Monday drove a Mercedes across the Crimean Bridge linking southern Russia to the annexed Crimean peninsula, less than two months since an explosion tore through one of the Kremlin chief’s showcase infrastructure projects.

The 12-mile (19 km) road and rail bridge, which Putin personally opened in 2018, was bombed on Oct. 8 in an attack Russia said was carried out by Ukraine.

Russia annexed Crimea in 2014, which was transferred from Soviet Russia to Soviet Ukraine in 1954 by then Soviet leader Nikita Khrushchev and recognised by Russia in 1994 after the collapse of the USSR.

Ukraine has vowed to return Crimea, which relies on the bridge for supplies.

Putin said on Wednesday that his army could be fighting in Ukraine for a long time, but he saw ‘no sense’ in mobilising additional soldiers at this point.