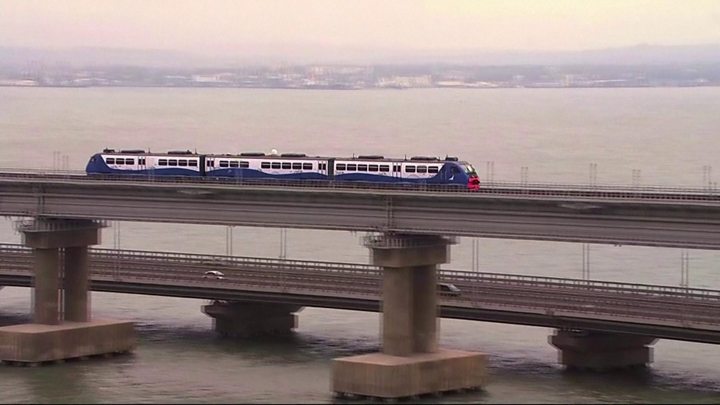 President Vladimir Putin has heralded the opening of a railway bridge to the Russian-annexed Crimea peninsula by posing in the driver’s cab and praising construction workers.

But opening of the railway was immediately condemned by the European Union as “another violation” by Russia of Ukraine’s sovereignty and territory.

President Putin marked that occasion by driving a lorry over it.

On Monday he asserted that millions of cars had already crossed the bridge and said the rail link “was a big deal as well”, with plans to carry 14 million passengers and 13 million tonnes of freight in 2020.

What is the bridge for?

Until the bridge was built, Russia had to rely on sea and air to supply the peninsula, which it seized from Ukraine in February 2014 before annexing it through a referendum rejected by the United Nations as invalid.

The $3.6bn (£2.8bn; €3.2bn) bridge was built by a close friend of the president, Arkady Rotenberg. Mr Rotenberg and several of his companies had EU and US sanctions imposed on them.

Russia’s president said the Kerch Strait bridge, with its new rail link, would have an impact on Russia’s economy as a whole. In a tweet, the presidency declared the bridge open to railway traffic.

Mr Putin boarded a three-carriage train in the Crimean city of Kerch, stood in the cab beside the driver and sounded the horn, before sitting with Mr Rotenberg as well as Russian and local officials as they travelled across the strait to Taman in southern Russia.

Mr Putin told construction workers that there had only been three times in 145 years that the rail route from St Petersburg to Sevastopol in Crimea had been broken: during the Russian revolution, during World War Two and in 2014.

The first train left St Petersburg on Monday afternoon carrying more than 500 people on the 2,500km trip to Sevastopol

What did Ukraine and the EU say?

EU spokesman Peter Stano said not only was the Kerch bridge “a continuation of [Russia’s] forced integration of illegally annexed Crimea”, it also limited free passage for ships heading to Ukrainian ports in the Azov Sea.

The EU has already banned imports of non-Ukrainian goods from Crimea or Sevastopol and banned European companies from investing there. European cruise ships are not allowed to dock in Crimea unless in emergency.

The Ukrainian president’s office in Crimea also condemned the new link saying it showed a disregard by the Kremlin of “the universally recognised principles and norms of international law”.

However, the opening of the link comes against a backdrop of otherwise improving relations between the two neighbours. President Volodymyr Zelensky met Mr Putin earlier this month for their first international summit aimed at resolving the conflict in eastern Ukraine.

There are hopes that Ukraine and Russian-backed separatists will exchange a prisoner exchange by the end of the month as part of efforts to reduce tensions.

After Crimea was annexed by Russian, rebels armed with Russian weapons rose up against the Kyiv government. More than 13,000 people have died in the ensuing conflict that has lasted more than five and a half years. Moscow has always denied sending regular troops to help the separatists.