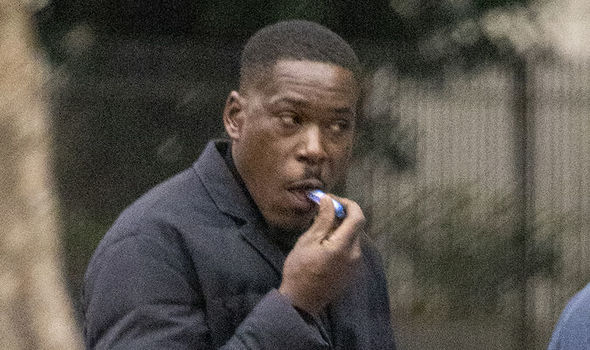 Joel Miles, 37, has now been jailed for the dangerous driving which caused his victim to be flung over the vehicle’s handlebars. He had concocted a lie that a gang had stolen the bike and rode off with his girlfriend on the back before crashing.

But CCTV captured the bike overtaking cars at speeds of up to 60mph in a 20mph zone in the minutes before it crashed – with no sign of the alleged theft.

His girlfriend Paris Burke was left “in a pool of blood” and spent two weeks in hospital having suffered “permanent and life changing injuries” including needing to have bolts inserted into her skull.

Jailing him for three years, Judge Usha Karu said: “Ms Burke was on the ground in a pool of blood suffering from serious injuries.

“She has been horrifically affected by this incident, emotionally and physically. It has been long lasting and it has been life changing.”

You drove the quad bike at greatly excessive speed without any regard to the great danger being caused to others. This was utterly reckless

The judge continued: “I’m told she wanted to come to court today but experienced a panic attack and was unable to do so.

“The main cause of the accident was your excessive speed which was at least two times over the speed limit and close to three times.

“This was a prolonged piece of very bad driving and on a high powered vehicle inadequately equipped involving a deliberate decision to ignore the rules of the road.

“You drove the quad bike at greatly excessive speed without any regard to the great danger being caused to others. This was utterly reckless.

“You appeared to ignore Ms Burke’s warnings you were driving too fast and, further, drove the bike knowing it was not to be driven on the highway and a pillion passenger was not permitted and it was being ridden without a crash helmet.”

The court heard Miles bought the vehicle on eBay just days before the accident on Coldharbour Lane in Brixton, south London, in July 2019.

Neither he nor his girlfriend were wearing a helmet and the bike did not have foot rests or hand grips for a passenger.

It was said Miles had been “informed” the bike was not to be used on the roads, as it did not have a speedometer or the correct tyres, and was labelled to show it could not have a passenger.

The court heard Miles overtook two cars on the wrong side of the road before losing control of the bike as he approached a pedestrian island.

The bike flipped over and crashed into a parked van with Ms Burke being flung over it, fracturing her skull and suffering “catastrophic” injuries including a traumatic brain injury.

Prosecutor Alex Agbamu read from a statement given by Ms Burke after the accident, and said a “number of bolts” had to be inserted in her head to reconstruct her skull.

He continued: “She had to learn to walk again. Her balance was affected and caused her to fall when she tried to walk.

“When she was discharged, she found herself to be in excruciating pain for which she was prescribed morphine.

“Her vision became affected and her eyes became especially sensitive to light. Since the incident she is unable to wear glasses because they no longer fit her face because of the swelling.

“Psychologically she has suffered from post traumatic stress disorder, anxiety and what she describes as a loss of confidence.

“She has alopecia as a consequence of the stress she has been under and has been feeling on edge. She lived on her own before this, but she can no longer do so and had to move in with her mother.

“She requires help washing, dressing and was only able to drink through a straw because her jaw had to be wired.

“She suffers from emotional outbursts including screaming and shouting. She is unable to work.”

The court heard Ms Burke gave another statement last year stating she felt better but was a “very different person”.

She said she is unable to remember the crash but has “flashbacks” including telling Miles to “slow down” and claims he tried to do a “wheelie” on the bike.

Two experts – one from the Met Police and another instructed by Miles’ defence team – said he was travelling somewhere between 50 and 60mph just before the crash.

Passersby came over to help the couple and Miles was heard asking if he could borrow a car to flee the scene, and whether anyone had chewing gum, the court heard.

Miles left before paramedics arrived, and made a 999 call to police claiming his quad bike had been stolen and he had seen it crash.

He then went to King’s College Hospital to find Ms Burke, and told suspicious police officers watching over her that he was a family friend named “Andrew”.

Police went to his mother’s home in Camberwell but he could not be found.

He arrived at Walworth police station with a solicitor six days after the crash and claimed he had made the 999 call while concussed.

In another message, Miles said: “I did not stay at the scene. I’m going to hand myself in on Monday but I was smoking, like an idiot.”

Miles initially denied causing serious injury by dangerous driving and perverting the course of justice, but pleaded guilty after CCTV of the incident was sent to his lawyers.

The court heard he was convicted of driving while over the legal limit for cannabis in April last year, after he had been charged over the quad bike incident.

He also has previous convictions for wounding, ABH and driving while disqualified, the court heard.

Miles, of Camberwell, south London, was jailed for three years and banned from driving for four-and-a-half years.