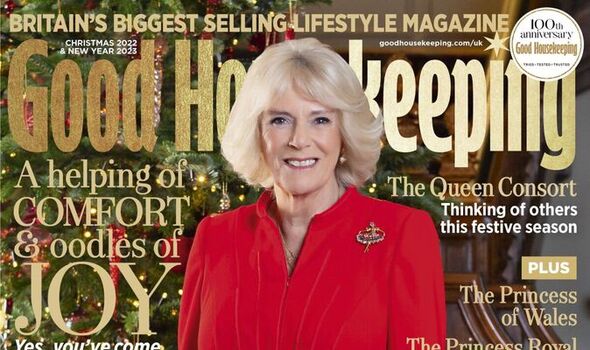 The glossy magazine goes on sale today and features Camilla in a striking festive red dress. It also marked the Platinum Jubilee of the late Queen, Elizabeth II, Camilla’s mother-in-law.

In an exclusive interview, Camilla opened up about her meaningful work with domestic violence charity, SafeLives, and shared some of her experiences chatting to survivors and volunteers at the charity.

She said: “I firmly believe that volunteers are the backbone of this country and, often unseen and unsung, truly hold our communities together… I would like to thank our country’s volunteers, from the bottom of my heart, for the hope they give to each one of us.”

She said: “The work of SafeLives is extremely close to my heart because I have had the privilege of meeting so many women – and men – who live in an atmosphere of permanent fear. Their stories still haunt me. Over and over again, I have heard that what survivors want, above all, is for the wall of silence to be broken.”

“Without a doubt, spending time privately and under the radar with women, men and children who have managed to escape abuse and rebuild their lives. Their experiences are always deeply harrowing, but their strength as they overcome seemingly insurmountable obstacles is inspiring.”

She spoke of Diana Parkes’ story, describing how in 2010, her daughter Joanna, was beaten to death with a claw hammer by her husband, as her two children played in a neighouring room.

She said: “Diana had to identify her daughter’s body and saw, in horrifying detail, what Joanna’s husband had done to her. Diana’s story has always resonated very deeply with me, partly, I think, because she and I are the same generation and are both grandmothers.”

And she explained: “SafeLives is founded on a wonderfully simple principle: the ‘best friend’ rule. That is, if your best friend were experiencing domestic abuse, what would you want for her? You would want her to receive help as early and as consistently as possible… Seventeen years on, the ‘best friend’ rule still applies – and makes all the difference in the world to more than 75,000 adults and 95,000 children each year.”