Mr Roberts took a swipe at Mr Velshi’s comments about Britain’s history of colonialism. The British historian defended the Monarchy by discussing poll results conducted to see whether the British public wanted to uphold the royal institution. Mr Roberts pushed back on comments about the British involvement in the trans-Atlantic slave trade and pointed out that Britain abolished the practice 32 years before the United States did. The Queen’s death earlier this week sparked a debate in some Commonwealth countries about the Royal Family’s colonial legacy.

Mr Velshi said: “We just had a historian say, there are many people who are Queenists, they’re not monarchists they liked her.

“They’re either bored with the institution and think that it needs to change or aren’t going to be into the next King, give us your evaluation of that.”

Mr Roberts told MSNBC: “I think that’s wildly overstated frankly I think when you look at all the opinion polls we’re about 80-85 percent of having a constitutional monarchy, whoever is on the throne.

“So I think this is extremely overdone… Frankly, rather I’m afraid to say as your instruction was, if we have given so much pain to people throughout history why was why was Charles chosen by every single Commonwealth country many of which are former imperial countries as the head of the Commonwealth?”

The historian added: “I’m certainly taking issue with your remarks about slavery which we abolished 32 years before you did, and we didn’t have to kill 600,000 people in a civil war over it.” 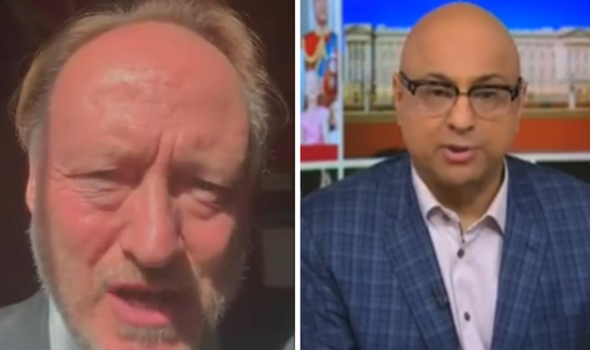