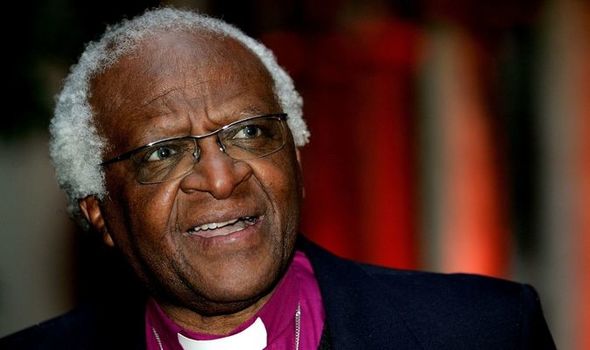 Her Majesty said she was “deeply saddened” at the passing of the South African clergyman, who led the fight against apartheid alongside Nelson Mandela.

Boris Johnson, Tony Blair, Barack Obama, the Archbishop of Canterbury and the Dalai Lama were among those paying tribute.

Tutu, who was awarded the 1984 Nobel Peace Prize, died peacefully yesterday at the Oasis Frail Care Centre, in his home city of Cape Town.

The Queen said: “I am joined by the whole Royal Family in being deeply saddened by the news.

“I remember with fondness my meetings with him and his great warmth and humour.

“Archbishop Tutu’s loss will be felt by the people of South Africa, and by so many people in Great Britain, Northern Ireland and the Commonwealth, where he was held in such high affection and esteem.

“A man who tirelessly championed human rights in South Africa and across the world.”

The Duke and Duchess of Sussex said: “He was an icon for racial justice and beloved across the world.

“It was only two years ago that he held our son, Archie, while we were in South Africa.”

The Prime Minister said the Archbishop would be remembered for his “spiritual leadership and irrepressible good humour”.

He added: “He was a critical figure in the fight against apartheid and in the struggle to create a new South Africa.”

Former PM Mr Blair said: “He made an immense contribution to the ending of apartheid and South Africa’s transition to democracy.

“His spiritual leadership and willingness to take action in pursuit of peaceful change earned him the respect of millions in South Africa and the rest of the world.”

Justin Welby, the Archbishop of Canterbury, called him a “man of words and action”. He said: “He was the rainbow leader. He didn’t stick with one group. He defended the rights of LGBT people in the Constitution. He defended the rights of former enemies.” Labour leader Sir Keir Starmer said: “Desmond Tutu was a tower of a man and a leader of moral activism. He dedicated his life to tackling injustice and standing up for the oppressed.”

Former US president Mr Obama tweeted: “Archbishop Desmond Tutu was a mentor, a friend and a moral compass for me and so many others.

“Archbishop Tutu was grounded in the struggle for liberation and justice in his own country, but also concerned with injustice everywhere. He never lost his impish sense of humour and willingness to find humanity in his adversaries.”

South African President Cyril Ramaphosa said: “Desmond Tutu was a patriot without equal – a leader of principle and pragmatism.”

The Nelson Mandela Foundation, which highlighted the friendship between the pair, called the loss “immeasurable”.

Lord Steel, ex-president of the British Anti-Apartheid Movement and former Liberal Party leader, called him a “gigantic and effective opponent of apartheid”.

Virgin founder Sir Richard Branson highlighted the campaigner’s sense of humour. He said: “Arch was one of the most positive, funny, life-affirming people I have ever had the pleasure of knowing. He had no airs and graces, and always made everyone laugh. ‘I don’t know why, but some people accuse me of name-dropping,’ he told me once.

“‘I just happened to have lunch with the Queen at Buckingham Palace the other day and she said, ‘Arch, you are such a name-dropper!'” Tributes also came from the world of showbusiness.

Strictly judge Motsi Mabuse, who was born in one of South Africa’s apartheid-era homelands, tweeted: “RIP Desmond Tutu. Forgiving is not forgetting. It’s actually remembering – and not using your right to hit back. It’s a second chance for a new beginning.”

Tutu was born in Klerksdorp, Transvaal, in 1931, and moved to Johannesburg aged 12. He became a teacher, then was ordained into the Anglican church, before moving to London in 1962 to study theology at King’s College.

His lectures on the suffering of South Africans made him an antiapartheid figurehead when Mandela was in jail.

He famously appealed for peace during a funeral held for 15 victims of clashes with police in 1985.

His actions helped pave the way for the country’s first fully democratic election in 1994, won by Mandela.

He also became the first black Anglican Archbishop of Cape Town. But he was diagnosed with prostate cancer in the late 1990s.

Tutu retired from public life in 2010 but continued to do charity work through the Desmond and Leah Tutu Legacy Foundation.

Tutu, who lived in Hermanus, near Cape Town, leaves his wife of more than 60 years Leah, four children and numerous grandchildren.