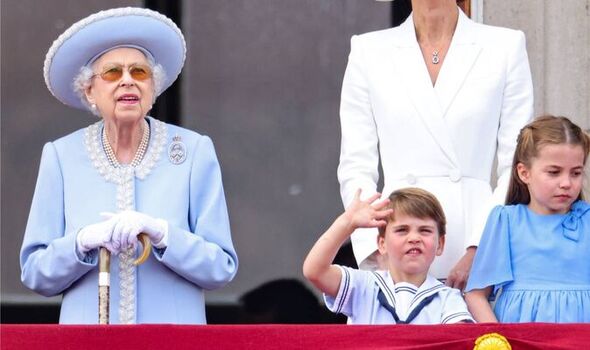 The festivities that summer had been a roaring success, confounding official fears that public enthusiasm might be tepid amid the economic and political turmoil engulfing the nation. In fact, the British people celebrated with fervour, partly because the Jubilee served as an antidote to strife, and partly out of admiration for the Crown, which was one of the few parts of civic life in the 70s that functioned well.

It is impossible to avoid the parallels between this weekend’s Jubilee and the events of 45 years ago.

Once again, the Government is under siege and the economy is in trouble, with inflation rampant, growth sluggish, taxation on the rise, and debt exploding. Yet it is precisely this difficult backdrop that has galvanised the celebrations so impressively.

The public is not only desperate for some relief from the cost-of-living crisis, but also wants to show pride in our country despite all the current problems.

Above all, just as in 1977, they want to express their admiration to the Queen, who has continued to fulfil her role with grace and without complaint, even if her public appearances may now be rationed.

Yet her understandable frailty at the age of 96 only adds to her stature, emphasizing how dedicated she has been over seven decades and how much we miss her when she has an enforced absence like the one that compelled her to miss the Thanksgiving Service on Friday.

The national devotion to her now is even greater than it was back in 1977, due to her astonishing record of duty and commitment.

She is now by far the longest-serving monarch in British history, and is a much greater figure than Queen Victoria, the only other sovereign to sit on the throne for more than 60 years.

In graphic contrast to Elizabeth II, Victoria was wilful, politically partisan, self-pitying, stubborn and sometimes neglectful of her duties. “The Queen alone is enough to kill any man,” said the great Liberal leader William Gladstone, who was exasperated by her whims.

No modern politician has ever had the remotest cause to complain about Elizabeth, one of whose abiding qualities is to respect the constitutional limits of her position.

Despite their very different characters, she has had good relations with all 14 of her prime ministers, even the icy Ted Heath and the erratic Boris Johnson.

That helps to explain why she has so brilliantly avoided political controversies during her long reign, acting instead as an agent for unity above the fray.

Sir Michael Palin, the television presenter and comedian, it well during a BBC performance on Thursday, when he referred to the Queen’s gift for “benevolent neutrality”.

This weekend we are celebrating not only the cherished institution of the Crown but also the unique achievements and personality of Her Majesty.

It is the respect she instinctively inspires which drives the current, extraordinary outpouring of national devotion. No elected head of state or celebrity office-holder could provoke such adulation.

So great were the crowds in the Mall on Thursday for her appearance, alongside her closest family, on the balcony of Buckingham Palace that all approach roads had to be closed from the early morning.

“It’s wonderful,” the Queen said, when she saw the size of the cheering throng that had turned London into a sea of red, white and blue.

Over the four days of the Jubilee no fewer than 85,000 events – from pageants to parties – have taken place, while today there could be as many as 200,000 Jubilee lunches involving over 12 million people.

Her moral example means that republicanism is still a fringe cause in Britain, without any traction or immediate hope of success.

Tellingly, the Labour Leader Sir Keir Starmer, who as a young lawyer flirted with the idea of abolishing the monarchy, wrote an article last week extolling the Queen and arguing that Britons had a patriotic duty to back the Jubilee.

In our noisy democratic age, where deference has disappeared, the most powerful weapon in defence of the Crown is Elizabeth II’s own quiet, selfless leadership.

That truth was highlighted in a fascinating BBC interview last week with Rowan Williams, the former Archbishop of Canterbury.

He said that as a young churchman he had republican sympathies, but his outlook was transformed by his experience of working with the Queen as he came to value her wisdom, compassion and shrewdness.

In the same vein, Sir Simon Armitage, the Poet Laureate, explained that his attitude to the monarchy had been changed by viewing her in action. “I’ve been very much won over by the Queen.”

A more divisive figure charmed by the Queen was the late former Irish Republican leader Martin McGuinness, whose handshake with her in Belfast in 2012 was a hugely symbolic factor in cementing the Northern Ireland peace process.

McGuinness was full of praise for her, referring to her warmth and her belief in reconciliation.

For her part, the Queen sent McGuinness’s widow a private message of condolence when he died in 2017, another example of her generosity of spirit.

That quality is allied to a host of other virtues that have made her such an ideal sovereign, including her diligence, religious faith, humour and stoicism.

This is a woman who, during long stretches of her reign, was meeting more than 50,000 people and carrying out more than 300 engagements in a year without a hint of either grievance or self-importance.

As one of her former press secretaries, Charles Anson, put it: “By a miracle of temperament, she is very well suited to the job. She has very good shock-absorbers when things go wrong and she doesn’t make a hoo-ha when it’s a success.”

It is that unflappable nature that enabled her to cope so successfully with the personal crises of her reign.

These include the Annus Horribilis of 1992 when her family was rocked by divorces and the fire at Windsor Castle, the death of Princess Diana in 1997 and, more recently, the accusations from the Duke and Duchess of Sussex about bigotry in her family.

“Recollections may vary,” she said in a magnificently pithy response to their emotive attack.

For most of her reign, she was also assisted by the tremendous support given by her husband Prince Philip, who shared her phlegmatic mentality and impatience with self-indulgence.

A further reason for her success is that she has skillfully embodied the paradox of maintaining tradition while embracing change.

That duality was seen at its most powerful in the replacement of the British Empire by the self-governing Commonwealth, a process in which she was one of the key architects.

The flight from Empire in the post-war era could have been a tale of national humiliation. But instead it became a story of democratic advance, co-operation and self-governance.

The same is true of Britain’s shift from homogeneity into a multi-racial society over the last 70 years. It is a far-reaching change, but the unifying bond of the Crown ensured that diversity has arrived with remarkably little conflict.

Nor has the Queen held out against technological progress.

The Royal Family’s decision, for instance, to allow the broadcast of the Coronation in 1953 put rocket fuel under the expansion of TV.

In 1976 she was one of the first Britons to send an email when she participated in a demonstration by the Army of an early computerised messaging system.

And it was on her insistence in 1992 that the sovereign began to pay income tax for the first time, while in the 1960s she cleared out a lot of the flummery and anachronisms from Palace life.

We have been lucky to have her on the throne for 70 years.

As the Jubilee shows, she is an enduring emblem of British greatness. It is fashionable, particularly among Left-wingers, to knock our country, portraying Britain as a grey, backward, isolated island.

But the world has watched in astonishment and envy as our nation is gripped by a wave of inclusive, warm-hearted patriotic joy.

There could be no better advertisement for Britain than the last four days, in all their majestic pomp and eclectic liveliness.

A land that can host a concert with Ed Sheeran and Sir Elton John, a military parade of unparalleled precision in Trooping the Colour and a seafront street party in Morecambe with more than 5,000 guests is certainly not a place in terminal decline.

The Jubilee has given a monumental boost to the nation, serving as a reminder of our unique British identity and solidarity.

Given more than one billion people around the globe are thought to have viewed some part of the proceedings on TV, the Platinum milestone represents soft power on the world stage at its most potent.

In theory, the monarchy should not work in our democratic age since the hereditary principle runs counter to notions of equality.

It is a safety valve against extremism, a glue that binds against division and a conduit that promotes the most noble kind of patriotism.