The Queen has completed another first of her reign by attending the virtual unveiling of a new portrait of her.

Miriam Escofet, the winner of the 2018 BP Portrait Award, painted the portrait which was commissioned by the Foreign and Commonwealth Office as a “lasting tribute to Her Majesty’s service” to diplomacy.

The Queen saw the painting for the first time via her computer screen, before speaking to members of FCO staff about their work around the world during the coronavirus crisis.

It was the first time a painting of a member of the Royal Family was unveiled in an online call. The 94-year-old monarch appeared pleased with the portrait and it was apparent that her attention to detail remains sharp.

Ms Escofet told the Queen during the unveiling that she had included a hidden symbol in the painting – the insignia of the FCO – painted on to a tea cup.

The artist said afterwards: “She seemed to react very positively to it. She was smiling, asking how long it took and if I had any more projects on the go after this. 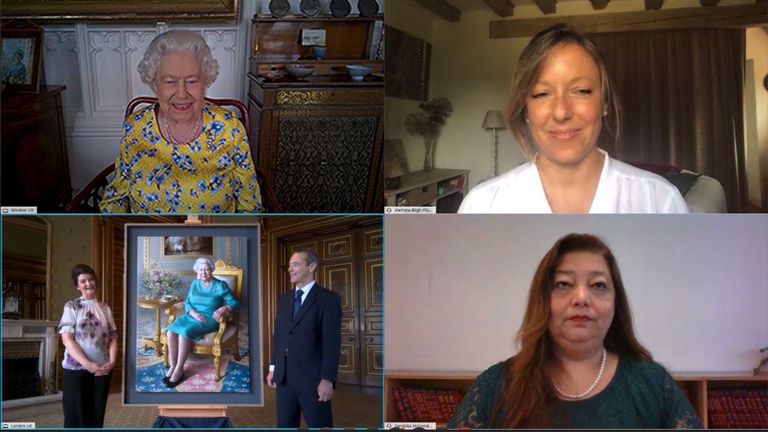 “When I explained certain elements of the painting, the tea cup, she made some amusing comments.

“I said I’m afraid the tea has been sacrificed for the symbolism.”

Ms Escofet had two sittings with the Queen – one at Windsor where she spent around half-an-hour photographing the monarch and the second at Buckingham Palace to focus on her facial expressions.

The painting took seven months to complete, with the final stages finished in lockdown.

Ms Escofet said: “It was a huge honour to paint a portrait of Her Majesty and to join the Queen to unveil the portrait virtually.

“I wanted the portrait to capture Her Majesty’s humanity, her radiance and her warmth, which came through so strongly in the two portrait sittings.”

The painting will be displayed in the refurbished reception of the new Foreign, Commonwealth and Development Office in London.