The monarch, 96, was pictured being driven from her Berkshire residence today. It comes as acid-penned biographer Tom Bower has released his new book which makes a series of bombshell claims about Prince Harry and Meghan Markle.

The Queen, wearing a colourful floral dress and pearl jewellery, appeared pensive as she looked out of the car window.

The monarch is travelling to her private residence in the Scottish Highlands for her annual summer break.

Every year the Queen heads to Balmoral Castle where she is joined by other members of the Royal Family.

It comes as Mr Bower’s latest book Revenge: Meghan, Harry And The War Between The Windsors is out today. 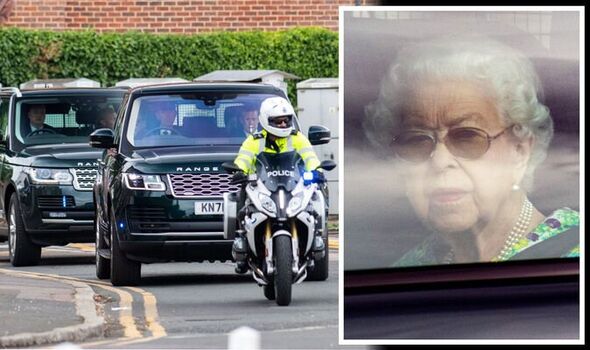 Among the controversial claims is that the Queen said “thank goodness Meghan is not coming” to Prince Philip’s funeral.

The book states: “‘Thank goodness Meghan is not coming,’ the monarch said in a clear voice to her trusted aides.”

Buckingham Palace, which does not comment on individual books, declined to provide a response.

However, sources close to the Queen question whether she would have anything other than the Duke of Edinburgh on her mind on the day of the funeral in April 2021.