Queen: Mourner wipes away tears while in queue

The mourner, wearing a red Wales Rugby team hoodie and beanie, said she came all her way from Wales to pay tribute to the late Queen at Westminster Hall. The woman, queueing outside Lambeth Palace, wiped away some tears and revealed due to the overnight rain and the cold she has not had any sleep last night. Speaking with GB News presenter Tom Harwood, she added that the public is starting to feel the pressure of all the media as the Queen’s coffin is due to arrive at Westminster Hall for the lying-in-state.

The woman told GB News presenter Tom Harwood: “I haven’t had any sleep last night because of the rain.

“The gazebo was just too damp and cold.”

She added: “We’re just beginning to feeling the pressure of all the media here.

“There was a lot of rain. 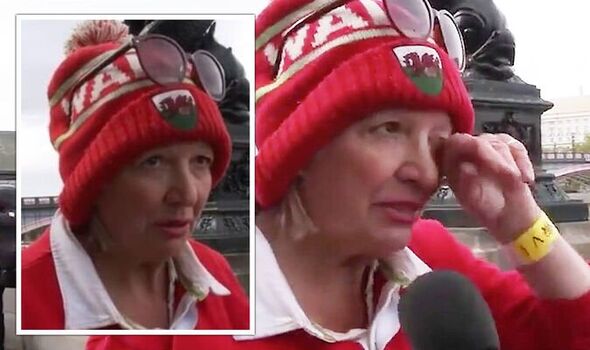 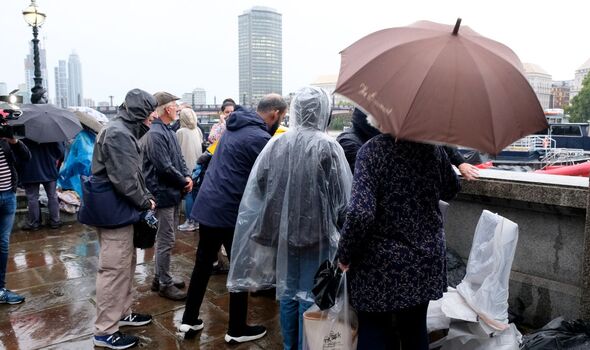 “[During the night] we went to St Thomas’s hospital to sleep in the [A&E] emergency for an hour.”

More than 400,000 people are expected to be able to file past the Queen’s coffin to pay tribute to the late monarch.

Estimates also revealed that people could wait up to 12 hours to pay respect at Westminster Hall.

Ahead of the Queen’s coffin arrival at the Palace, barriers for the queue were being places in the premises of Southwark Park, three miles from Westminster, to allow early mourners to line up to pay respect to the Queen.

On Wednesday, around 2:22pm, the Queen’s coffin will be taken via The Mall, Horse Guards Parade, Whitehall and Parliament Square to Westminster Hall.

During the procession in the capital, the King, members of the Royal family and senior staff of the late Queen will walk slowly behind the coffin in a route that is expected to take around 38 minutes.

Following the coffin’s arrival in Westminster Hall, the Archbishop of Canterbury will then conduct a short service in tribute to the late monarch. 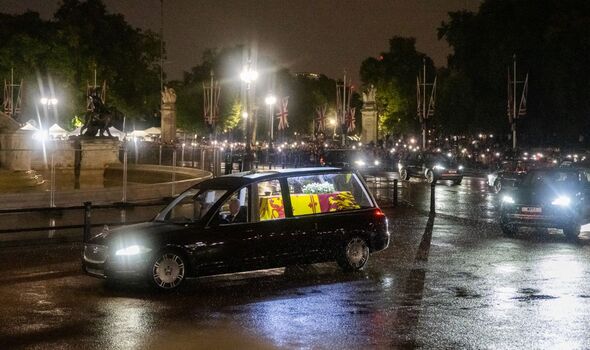 Once in Westminster Hall, the late Queen will lie-in-state until the morning of the funeral on Monday, 19 September.

Members of the public will be able to see the Queen’s coffin 24 hours a day, from 5pm on Wednesday until 6:30am on Monday morning.

Before arriving at Buckingham Palace on Tuesday evening, the Queen lay at rest in Edinburgh at St Giles’ Cathedral.

During the lying-in-state, more than 26,000 mourners have entered the cathedral to pay their respect to the late monarch and file past the Queen’s coffin.