Over the past few years the Queen’s farm have received millions from EU pots, which will dry up when the UK finally unshackles itself from the bloc. Royal finance expert David McClure said the Queen pocketed over £3 million in Brussels grants over the past five years for her 20,000-acre Sandringham estate alone.

In his book The Queen’s True Worth, which was serialised in the Daily Express, he said the Norfolk estate had “haemorrhaged” money until the Queen took advantage of funds from the EU.

Mr McClure said: “The Queen inherited the Norfolk property from her father King George VI in 1952 after it had been passed down through her family when Queen Victoria purchased it for the future King Edward VII with her own family funds. 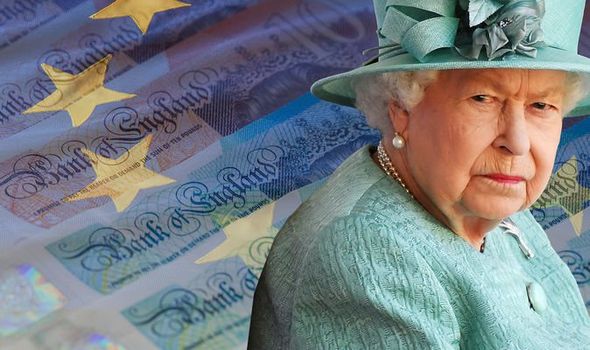 “Historically the 20,000-acre estate has haemorrhaged money – almost from the day it was first acquired for the Prince of Wales in October 1862.

“The Queen has helped turn it around financially by taking advantage of EU subsidies on the land she farms and by improving her income from tenant farmers.

“What had reduced profitability was fragmentation: there were simply too many small farms with too many workers producing too few profits.

“But in the Queen’s reign under Prince Philip’s supervision, mega-farms were created by amalgamating the smaller units and, as a result, the number of tenant farms fell from 30 to around 12 and the workforce shrunk to a tenth of its pre-war size.”

Meanwhile, the monarch’s son Prince Charles is also set to lose out after Brexit.

Mr McClure claimed the future King received £300 million in subsidies from a fund for “rural development projects” to contribute towards turning the Norfolk estate completely organic.

In Mr McClure’s book, The Queen’s True Worth, it was estimated the monarch’s £400million fortune is £50million more than previously believed.

He said: “Much of the Queen’s private fortune – which I estimate at £400million, £50million more than a number of recent estimates because of the extra cachet attached to the royal name – comes from the properties she owns.

“Some crude valuations of Her Majesty’s assets include Buckingham Palace – along with other official residences like Windsor Castle and Holyroodhouse Palace, as well as the Royal Collection – and consequently suggest astronomical figures.”

But it has not commented on what might happen after Brexit.

In a statement, it said: “Subsidies are open to all farmers and like others with agricultural interests, some subsidies are received on the queen’s private estates.

“Figures are in the public domain as a matter of record.”

Steeped in tradition, the Queen every year enjoys three-day Christmas celebrations at the 20,000-acre Norfolk estate include daily visits to church and numerous changes of outfits are the norm.

Christmas Day lunch is even scheduled to take just 50 minutes, with the times the family are expected to eat breakfast, walk the dogs, lunch and bedtime even pencilled in.