The Queen is marking her 95th birthday today, privately as she is still in mourning for her husband Prince Philip who died on April 9. There has been a worldwide outpouring of grief following Prince Philip’s death – with his funeral having taken place last weekend. To mark her birthday the Queen issued a touching statement thanking the public for their support and well wishes.

The Queen cut a lonely figure at her husband’s funeral on Saturday, sitting in the pew alone as the service took place.

Philip died at the age of 99 following a month-long hospital stay earlier this year, where he received treatment for an infection and surgery on an existing heart condition.

Royal Family members attended the scaled-down service at St George’s Chapel on Saturday to bid farewell to Philip in what was a ceremony meticulously planned by the Duke himself.

Today the Queen is privately celebrating her 95th birthday and has issued a message of thanks to the public for their support during such a difficult time. 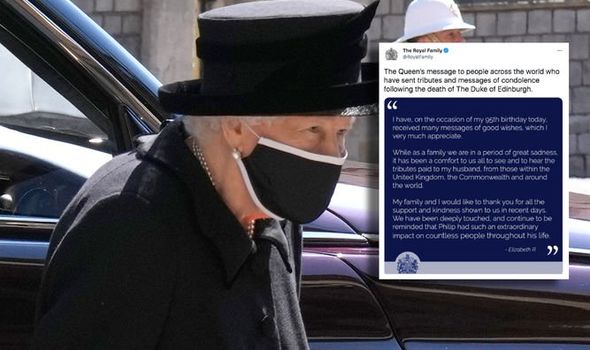 In a statement posted on Twitter as she marked her 95th birthday, the Queen said: “I have, on the occasion of my 95th birthday today, received many messages of good wishes, which I very much appreciate.

“My family and I would like to thank you for all the support and kindness shown to us in recent days. 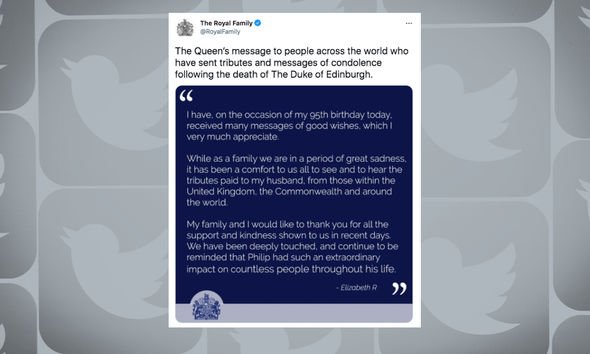 This is the first time the Queen has spoken out since the death of her husband.

She is currently in a two-week mourning period, as is the rest of the Royal Family.

This has meant no new pictures have been released to mark the occasion and no public celebrations for the Queen are taking place.

The Queen does have two birthdays, with the second taking place on June 12 this year.

Her second birthday is traditionally celebrated by Trooping the Colour, however this has faced upheaval due to coronavirus restrictions.

In a statement Buckingham Palace announced the usual celebration in central London will not take place in June.

Instead, the Queen may have another smaller version of Trooping the Colour at Windsor Castle, which took place last year.

Buckingham Palace has said options for an “alternative parade” were being discussed. 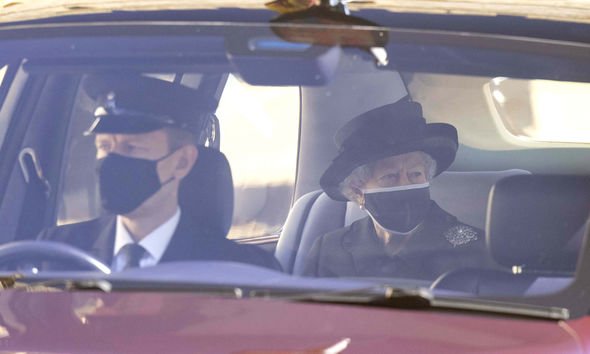 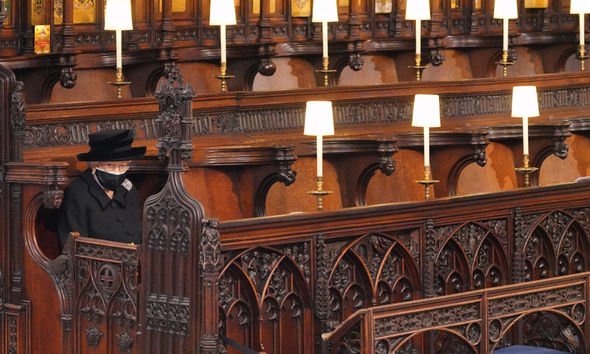 Members of the monarchy have been supporting the Queen throughout the mourning period for Philip, and some of her family are expected to be with her at Windsor Castle.

Mr Johnson wrote on Twitter: “I would like to send my warm wishes to Her Majesty The Queen on her 95th birthday.

“I have always had the highest admiration for Her Majesty and her service to this country and the Commonwealth.

“I am proud to serve as her Prime Minister.”

Justin Welby, the Archbishop of Canterbury has said the Queen will be more focused on “other people than herself” today.

The Archbishop said: “I was at the funeral on Saturday, her Majesty was, as always, more concerned with other people than herself, and she will be on her birthday,”

“She doesn’t do ‘I’m the most important person in the room’.

“She does ‘I mind about the other people more than about myself’. She is an extraordinary person.”