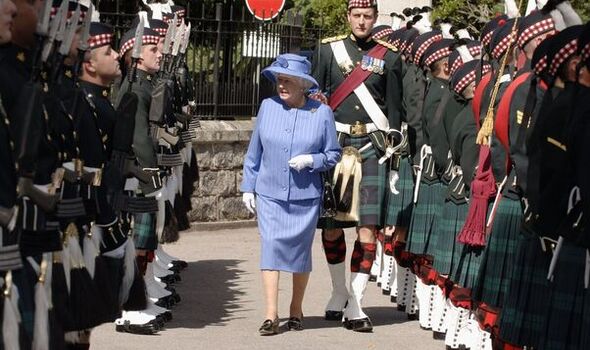 She was due to attend the ceremony tomorrow, but it has been cancelled to be hurriedly replaced with a “small, but private event”.

It is understood that just days ago the Queen was intending to attend the traditional ceremony before altering her plans.

It is the first time in decades, aside from the coronavirus pandemic, that she will not appear at the main gates at Balmoral Castle to greet wellwishers and signify the start of her annual holiday.

The Queen would usually inspect a Guard of Honour from Balaklava Company, 5th Battalion, The Royal Regiment of Scotland.

Last year she met mascot, Shetland Pony Lance Corporal Cruachan IV. The Queen, who serves as the colonel-in-chief, will now attend a private event on the Balmoral lawns in the confines of the Castle. She will still cast her eye over the soldiers, however. But no media will be invited.

A royal source said: “The traditional welcome to Balmoral is normally cemented in the Queen’s calendar and certainly something Her Majesty really enjoys and looks forward to.”

“It is a bitter disappointment the ceremony will not take place in its traditional form.”

Other sources have suggested that the alternative plan demonstrated “very much a sign of things to come”.

Buckingham Palace aides last night moved to dampen concerns over the monarch’s health, insisting the private ceremony was “in line with adapting Her Majesty’s schedule for her comfort”.

The Queen was forced to miss Platinum Jubilee events, including a service of thanksgiving at St Paul’s Cathedral and the Epsom Derby due to tiredness.

She has been staying at the smaller Craigowan Lodge on her estate since travelling to Scotland on July 21. It has recently had a “wheelchair-friendly” lift fitted.

The rustic seven-bedroom stone cottage is just a mile from Balmoral Castle and is where Prince Charles and Princess Diana spent their honeymoon in 1981.