Some of the world’s most influential and politically significant will gather on Monday to attend the state funeral of Queen Elizabeth II, bringing with it the end an era for the modern world. Among those expected to pay their respects from across the globe include the likes of US President Joe Biden, and his wife Jill, Queen Margrethe II of Denmark, Canada’s Prime Minister Justin Trudeau, heavyweights from the EU including Ursula von der Leyen and Charles Michel, and many hundreds more. Their respects will be paid at a moving service in Westminster Palace, led by the Archbishop of Canterbury Justin Welby, in a service that is expected to be watched by a potential global audience of some 4.2 billion people.

Another of those confirming their attendance to the state funeral was French President Emmanuel Macron, who issued an incredibly moving statement following news that Queen Elizabeth II had died at the age of 96 on September 8.

The Queen was well-known for being a Francophile, and was fluent in the French language.

Macron hailed Her Majesty for earning a “special status in France and a special place in the hearts of the French people”, adding: “No foreign sovereign has climbed the stairs of the Elysée Palace more often than she, who honoured France with six state visits and met each of its presidents.

“For her, French was not a mere relic of Norman ancestry that persisted in so many customs, but an intimate, cherished language. The Queen of sixteen kingdoms loved France, which loved her back.

“This evening, the people of the United Kingdom and the Commonwealth are mourning their Queen. The people of France join them in their grief.” 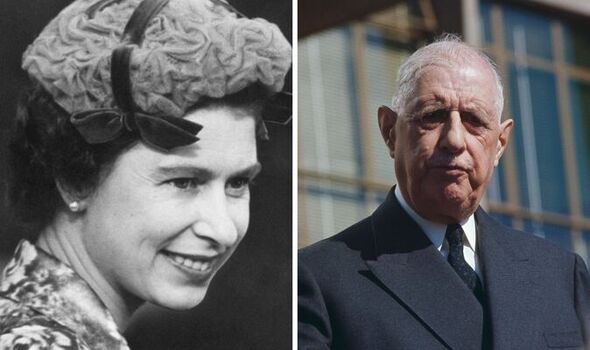 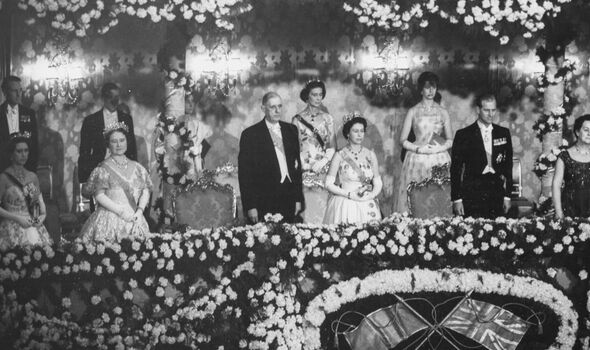 Her Majesty enjoyed a brilliant relationship with France, and on numerous occasions throughout her reign held court with whoever was leading the nation, including the likes of Mr Macron and one of his predecessors, Charles de Gaulle.

One interaction with Mr de Gaulle, however, left Her Majesty giggling, as the Frenchman seemingly referred to a rude word while in her presence. Something the Queen quickly cleared up.

Mr de Gaulle, who was President of France between 1959 and 1969, was welcomed to Buckingham Palace by Her Majesty and her husband Prince Philip, when the cheeky quip was made.

According to journalist Adam Helliker in 2019, the faux pas happened a year after he was elected President, and was witnessed by his wife Yvonne de Gaulle.

JUST IN: Liz Truss leads Tory fightback against Labour as Brits warm to her 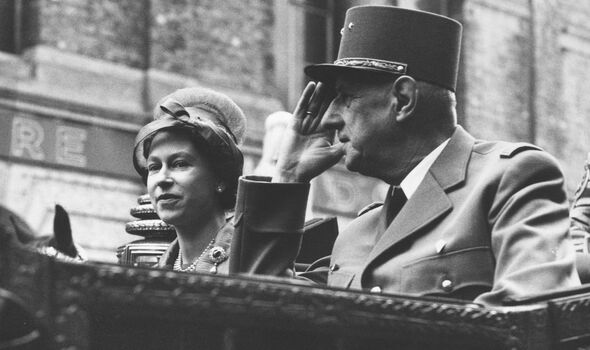 Mr Helliker told Fabulous Digital said: “A guest asked Madame de Gaulle what she was most looking forward to in her retirement, which was imminent. With great elaboration (as she didn’t speak much English) she replied: “A penis.”

“An awkward silence ensued for some time, until the Queen herself came to the rescue, and she said with a broad grin: ‘Ah, happiness!’.”

The visit to the UK also offered the Queen a chance to try and “persuade” him against carrying out a “dangerous” act, royal historian Hugo Vickers recently told Express.co.uk.

The royal historian, who knows Her Majesty personally, helped plan her last three jubilees and has helped promote the Platinum Jubilee. 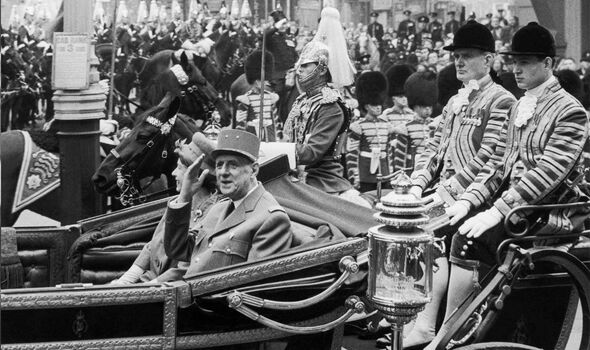 Speaking to Express.co.uk ahead of the Jubilee, Mr Vickers recalled how the Queen told him of how she “tried to persuade” Mr de Gaulle against a “dangerous” act during the state visit to London.

He recalled asking the monarch about the visit some years later, which saw Her Majesty and Mr de Gaulle take a carriage ride, and the Frenchman stand up and salute his old wartime headquarters in Carlton Gardens.

Mr Vickers added: “Years later, the Queen was unveiling a panel in the Mall and so I asked her, was I right in remembering this?

“I said that he stood up in the carriage to salute, and she said, ‘Yes, with me very much trying to persuade him not to’.”

He concluded: “Because I guess if you had a six-foot-six gentleman with a royal in a carriage standing up, it’s quite dangerous.”

The relationship between the British monarchy and Paris was continued with King Charles III making a call to Mr Macron on Wednesday, in which the French President said he “expressed France’s condolences on the death of his mother”, adding: “I will attend the funeral in London on Monday.”