The Queen took everyone by surprise as she spoke at the State Opening of Parliament today. She outlined in her speech that the Government pledges to “extend 5G mobile coverage and gigabit capable broadband.” One person said on Twitter: “The Queen saying ‘gigabit broadband’ just feels a bit odd.”

A third replied: “The amount of bizarre things Johnson and crew have made the Queen say. Gigabit and 5G infrastructure are my favourites.”

The Queen said the Government will “strengthen the economic ties across the union, investing in and improving national infrastructure.”

She said: “Proposals will be taken forward to transform connectivity by rail and bus and to extend 5G mobile coverage and gigabit capable broadband.” 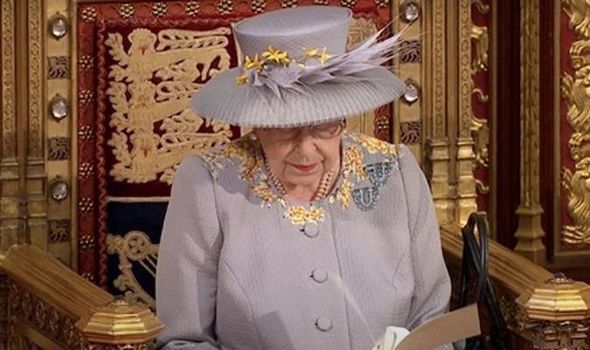 Legislation will support a “lifetime skills guarantee” and measures will be introduced to ensure that “support for businesses reflects the United Kingdom’s strategic interests and drives economic growth”.

Prince Charles walked his mother to and from the principle throne in the House of Lords, holding her hand as she made her way up the steps.

In the speech, The Queen pledged that the Government will continue to give aid to countries in need.

DON’T MISS
When will 30-year-olds get the vaccine?[COVID]
BBC’s Huw Edwards visibly emotional as he pays tribute to Queen[TV]
Meghan and Harry have sharpened divide between Queen and other royals[ROYAL]

The government also vows to make the UK safer for women and create ‘fairer’ immigration rules.

The Queen also said that measures will be brought forward to “address the legacy of the past” in Northern Ireland.

Her Majesty also promised new laws to prevent another Grenfell-style tragedy and to boost housebuilding.