The birthday wishes were accompanied by the emojis of a red balloon and a cake.

They also came with a picture of Princess Eugenie, taken two years ago at Royal Ascot.

Princess Eugenie is one of the Queen and Prince Philip’s eight grandchildren and is the youngest daughter of Prince Andrew and Sarah Ferguson.

Much like her sister Princess Beatrice, 31-year-old bears a full title but is not a working royal. 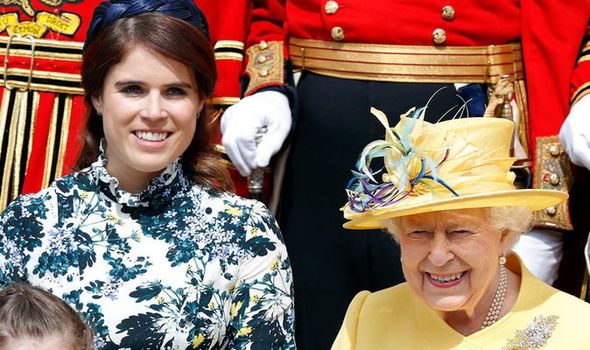 However, she has often attended major royal gatherings, such as Trooping the Colour.

The young York got married to Jack Brooksbank in that same church one year before, in October 2018.

Two years later, the loved-up pair announced they were expecting their first child.

On February 9, Princess Eugenie gave birth to August Philip Hawke Brooksbank at Portland Hospital, the same private clinic in London where she was born.

Jack and Eugenie shared a first picture as parents on Eugenie’s Instagram account hours after August’s birth was announced.

The snap only showed one of the hands of the newborn held by his parents’.

A few days later, Eugenie shared a picture of the new family-of-three taken by their midwife.

The royal also marked her first Mother’s Day by sharing a snap of August asleep on a blanked laid down in a colourful garden.

Princess Eugenie and Jack now live at Frogmore Cottage, the Duke and Duchess of Sussex’s home in Windsor, according to People magazine.

However, they spent the first national lockdown with Prince Andrew and Fergie, as revealed by the Duchess of York herself.

“Of course once she’s gone to get married, they live away.

“So, I haven’t seen her so much and so now it’s been a total joy to spend real quality time with her.”