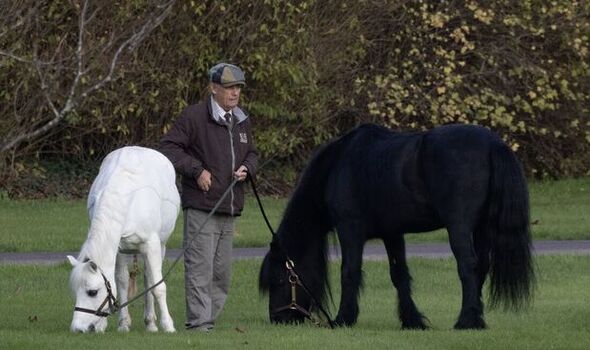 The Former Head Groom of Queen Elizabeth II, Terry Pendry, was seen today walking the late monarch’s fell pony, accompanied by a new young Pony at Windsor Castle. 24-year-old Emma, reportedly the Queen’s favourite pony, is seen for the first time after the Queen’s funeral. The animal was given a chance to say goodbye when the Ceremonial Procession of the coffin of Queen Elizabeth arrived at Windsor Castle before the funeral.

On the day of the Queen’s funeral, Emma, waited for her on the Long Walk in Windsor as the Queen’s hearse was taken to St. George’s Chapel.

Mr Pendry, 72, who attended the service at St George’s Chapel, had then spoken on the Queen’s relationship with Emma.

He told the Daily Mail: “It was an honour and privilege to have Emma with me to say goodbye to Her Majesty for the last time.

“The Queen adored Emma and rode her for more than 20 years so it was only right she should have been there, and she behaved impeccably.

“I think she probably had some sort of sixth sense that Her Majesty wouldn’t be riding her anymore and she did her proud by standing there so respectfully.”

He went on: “The Queen always rode with a white sheepskin saddle, it was her favourite, so I made sure Emma had that on as well.

“Then for the finishing touch, I put Her Majesty’s Hermes headscarf on the saddle. It was her favourite and had the horses and carriages printed on it.

“Less is more if you ask me. I could have put her riding crop and gloves, but I just thought the headscarf was the perfect touch.”

He revealed the last time the Queen took Emma for a ride was on July 18.

Mr Pendry said: “I’ve been riding with the Queen for years and the last time she was on Emma was back on July 18 – two days before she left for Balmoral.

“It’s a memory I shall never forget, and I tell you something, the Queen may have been frail as any 96-year-old would be, but she was still as sharp as anything, she was crystal clear.

“I was right by her side and there was no indication that anything was wrong with her. The Queen was an incredible lady who selflessly dedicated herself to the service of this country and the Commonwealth.

DON’T MISS: Princess Anne ‘saw right through’ Meghan when she married into Firm
Kate’s touching tribute to Diana as royal attends state banquet
Kate’s mum opens up on special dream that has ‘finally been fulfilled’

“It’s been my privilege to have been a loyal servant of the Queen and I hope to carry on my work for the King and there is lots of work to be done.”

Mr Pendry, who was awarded the LVO and BEM for his services, added: “I’m sad to say that I don’t think we shall ever seen anyone like the Queen again and there are no words to express how much I shall miss her.

“All I can say as a loyal servant of many years is ‘God bless her and God Save The King.’ The last few days have been very traumatic but now we just have to carry on and get on with our work.

“I’m just so glad that Emma and I were able to say our goodbye at Windsor where Her Majesty enjoyed riding her horses so much.”