Queen's funeral: The world 'will be watching' says Fitzwilliams

With its choreographed pomp and ceremony, it is expected to be the largest international event the UK has hosted “possibly ever”, according to sources. It is the biggest operation undertaken in the history of the Metropolitan Police.

More than a million people are expected to line the streets, with crowd numbers exceeding those for the Queen’s Coronation in 1953, her father George VI’s state funeral in 1952 and the ceremonial funerals held for Diana, Princess of Wales in 1997, and the Queen Mother in 2002.

The manpower needed to ensure Operation London Bridge goes without a hitch will surpass that for the Queen’s Jubilee events and the London Olympics.

Crowds will flock to Westminster Abbey but will also line the route to Windsor to watch the Queen’s final journey, requiring huge logistics, erecting barriers and closing streets. The Met has put up 22 miles of barriers across central London.

Train services will run as normal. Flights into Heathrow have been cancelled to ensure the skies over London fall quiet during the events. 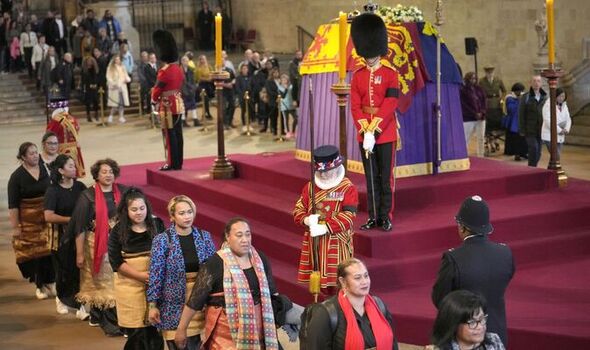 Some bus and tram services across the country will halt at 11.55am, as the ceremony draws to a close and the national two-minute silence takes place.

Meanwhile, giant screens have gone up in Hyde Park and in many cities and towns to allow mourners to congregate and watch.

The funeral will also be screened in the Curzon, Vue and Arc cinemas, and in the Queen Elizabeth Hall, in London’s South Bank Centre, all free of charge.

Last Post – a short bugle call – will be played in Westminster Abbey and then the nation will come to a standstill for the two-minute silence to honour Her Majesty.

There will also be specialist first-aiders to help anyone overcome with grief.

St John Ambulance has 32 mental health trained first-aiders ready across London and Windsor to help anyone who finds the events of the day overwhelming. 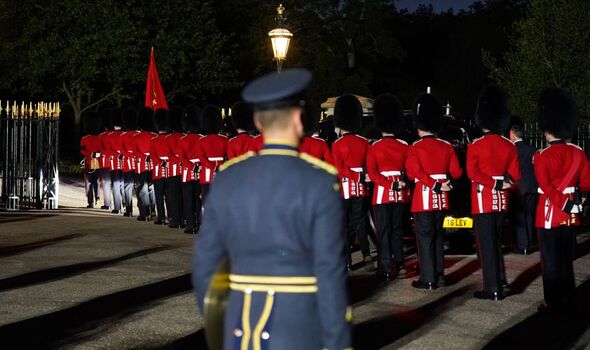 “I was walking down the queue to see the Queen lying in state and thought there could be people here who knew her or worked for one of her charities, and I could see some were extremely upset.”

A quarter of SJA’s 10,000 volunteers have been involved since the Queen’s death announced, supported by about 100 backroom staff who helped move 20 tons of medical equipment and 100 vehicles, including 22 mobile treatment centres and about 30 ambulances, into London.

As of Friday morning, SJA had given out 12,000 blankets and 15,000 bottles of water to people queuing for the Queen’s lying-in-state.

Mr Lee said: “By Friday morning we had provided support to 450 people, mostly foot care and plasters to people standing for long periods, or pain relief for bad knees, hips and ankles, and rehydrating people.”

The London Ambulance Service has 300 extra staff across its 999 control rooms and on the road tomorrow.

The Met would not confirm the total number of officers involved in the operation. However, Deputy Assistant Commissioner Stuart Cundy said colleagues from every force had come to help, with about 20,000 hours of shifts in the past week. In all, there will be 2,000 extra officers on patrol from other parts of the country.

“It is a truly immense operation of huge scale and complexity.”

Thames Valley Police will have around 2,000 officers and airport-style security in Windsor tomorrow, ahead of the committal service.

Mr Cundy said the stabbing of two officers in London on Friday, although not connected to the mourning, had brought the need for security into sharp focus.

By Friday there were 34 arrests linked to the mourning but none for protesting, which will be allowed, even tomorrow.

A day of reflection a one-minute silence will be observed across the country at 8pm tonight to “mourn and reflect on the life and legacy of Queen Elizabeth II”, writes Benjamin Russell.

The King will also host a lavish state reception at Buckingham Palace for dignitaries from around the world as they arrive ahead of the Queen’s funeral tomorrow. Among them will be US President Joe Biden and French President Emmanuel Macron.

Prince William, wife Kate and Princess Anne will also be at the event. The King is expected to hold a Palace audience with PM Liz Truss.