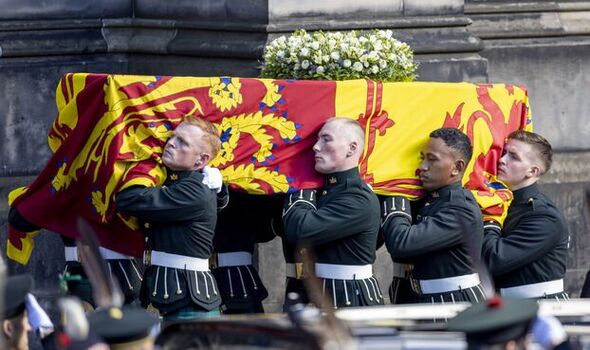 A blanket ban on private jets and helicopters is also in place for Monday’s ceremony.

The move means heads of state and their spouses – including Mr Biden, below, French leader Emmanuel Macron and Japan’s Emperor Naruhito – will be ferried into central London.

Leaked documents reveal Whitehall has issued the strict guidance for all dignitaries arriving in the UK to pay their respects to Her Majesty.

The Politico news website claims the communication, sent to embassies late on Saturday, states the political elite will be unable to use their own cars to get to Westminster Abbey.

Instead, they will park in west London and utilise coaches provided for them.

The Foreign, Commonwealth & Development Office has allegedly asked the heads of state not to use private jets and has limited spaces at the event to two per nation.

This means those unable to attend – not least Ukraine President Volodymyr Zelensky who yesterday signed a condolence book in Kyiv – can send representatives.

But elements of the plan have been met with amazement in some quarters – with one foreign ambassador complaining: “Can you imagine Joe Biden on the bus?”

Yet the document claims “tight security and road restrictions” make the rules vital and they said Heathrow was simply “not available for private flight arrangements”.

Helicopter transfers are also out “due to the number of flights operating at this time”.

The document states the FCDO “regrets that, because of limited space, no other members of the principal guest’s family, staff or entourage may be admitted”.

But it promised: “Multiple and comprehensive layers of security across London.”

An FCDO source said last night: “It is a huge operation with 500 dignitaries from across the world. The logistics are meticulously planned to try to make it as smooth as possible.”