Her Majesty penned a message to the Commonwealth nine months ago, in early October 2021. In a clip released at the time, the Queen was filmed signing off the poignant letter while sitting at her desk.

The message was later rolled up and sealed to be safely placed in the Baton, which the head of state sent off to travel across the world during an upbeat ceremony held outside of Buckingham Palace.

The content of the royal statement has remained a secret for the past months.

But tonight, when Birmingham will host athletes, sports and royal fans for the Opening Ceremony of the Commonwealth Games, Prince Charles will read out his mother’s message.

Sparking an online frenzy among excited fans eager to learn the content of the letter, the Royal Family Twitter account wrote: “In October 2021, The Queen signed a message for the #B2022 Commonwealth Games Baton Relay. 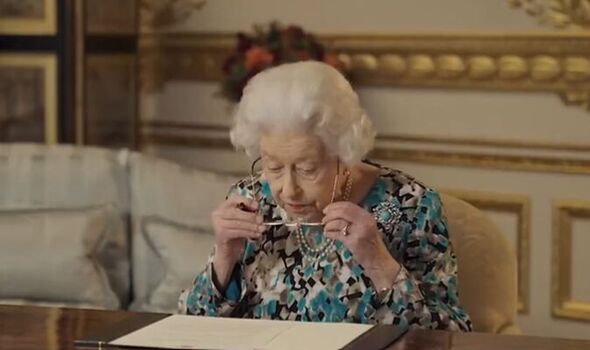 “After a 90,000-mile journey around the Commonwealth, tonight Her Majesty’s message will be revealed at the @birminghamcg22 Opening Ceremony.”

The Queen’s Baton Relay reached Victoria Square in Birmingham earlier today, and was welcomed by thousands of well-wishers and a colourful spectacle.

British actor and presenter Sir Lenny Henry was in charge of carrying the Baton for the last stretch of its journey.

The Relay lasted 294 days and touched 72 nations and territories, including Cyprus, Pakistan and the Falkland Islands.

The Baton was passed on by more than 7,500 batonbearers, with the first one being four-time Paralympic gold medallist Kadeena Cox.