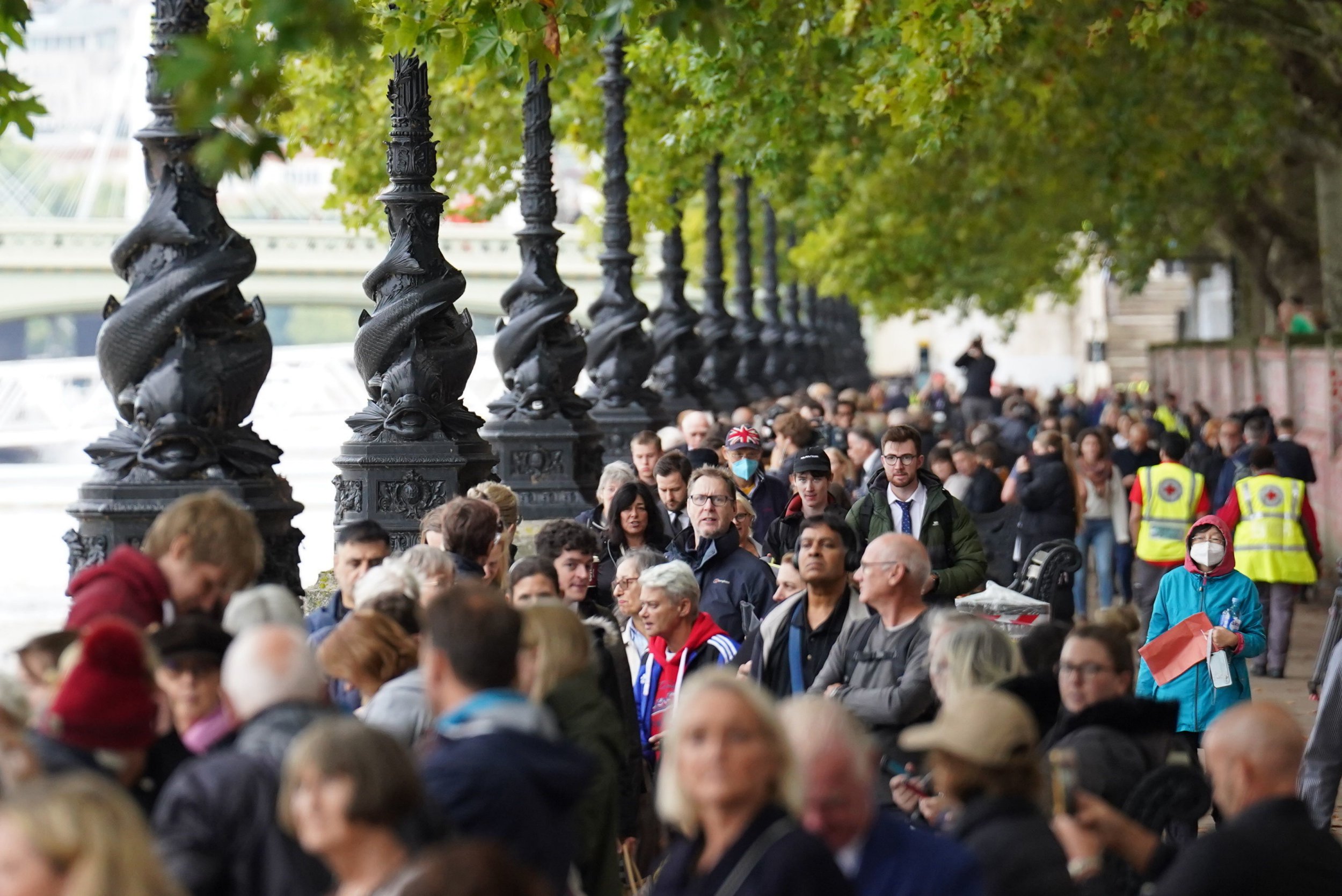 The queue of people waiting to pay their respects to the Queen lying in state is already growing, with some camping out overnight despite downpours.

Exactly how big the queue will grow is still unclear, but it will be in the hundreds of thousands with numbers ranging from 400,000 to more than 750,000.

By 8am the line already stretched between Lambeth Bridge and Westminster Bridge, with waits expected to be between 12 and 30 hours before the funeral on Monday.

Westminster Hall will not open to people processing past until 5pm this evening, but the queue began 48 hours before this when Vanessa Nathakumaran, from Harrow, arrived at Lambeth Bridge on Monday.

Before this, there will be a procession of the Queen’s coffin through central London, beginning at 2.22pm.

King Charles will walk behind the coffin along with both his sons William and Harry.

It is thought the queue might reach four miles up the Thames to Southwark Park in Bermondsey before the public are admitted to the lying in state.

Those queueing overnight braved downpours of rain, with some filmed huddled underneath umbrellas on a wet pavement.

Forecasters said there was still a high chance of rain until 12pm today, and by the afternoon temperatures were expected to be between 18C and 20C and ‘quite pleasant’.

A Met Office spokesperson said yesterday: ‘In terms of people being outside queueing, really the next 24 hours is likely to see the most unsettled weather before things start to calm down a bit with the high pressure moving in’.

From this afternoon, ‘settled, fine, dry”‘conditions are expected to last until the beginning of next week.

As the queues built up, many spoke of a sense of camaraderie and making friends with those standing near them.

A group of four women, who had all travelled alone, had struck up a conversation as they prepared to weather a rain shower.

Kate Paysen, 58, had flown from Lisbon just to be in London for the lying in state.

Ms Paysen, who grew up in the UK but emigrated in 1998, said: ‘I always felt that when the Queen died I would come and pay my respects.

‘My father was in the Army and I grew up in a royalist household, and I think it’s important to come and be part of history. I think the Queen for me always made me feel proud to be British.’

Sarah Santangelo, 50, is based in the US but had been back in the UK for a few months.

‘I always said that if anything ever happened to the Queen I would fly back, it just happened I was already here when she passed away.’

Ms Santangelo added: ‘She’s sacrificed her whole life for this country, the least I could do is pay my respects.’

Gina Carver, 60, from Tunbridge Wells, Kent, said: ‘To give up my day queuing is nothing compared to what she’s done for 70 years – and she does feel like our grandmother.’

Helen Redding, 60, from Sidcup, south-east London, said: ‘When the Queen died I was shocked how much it meant to me.’

She added: ‘I felt like I had to be here, to be part of history and I didn’t want to miss this opportunity to pay my respects.’

Lee Harkness, 51, a clinical psychologist from Lancashire, travelled down on Tuesday night with his daughter Chloe, 11, and his sister Louisa Harkness-Hudson, 55.

Mr Harkness said: ‘I’m not really a royalist, but having seen the (lying in state) in Edinburgh, it looked like a really nice way to pay my respects to someone who has dedicated themselves to this country.’

Mrs Harkness-Hudson said: ‘I thought “we’ll regret it if we don’t go” – you only get one chance to do this, so we didn’t want to miss it.’

Chloe, on her first visit to London, said she had come along because she ‘wanted to witness a part of history’.