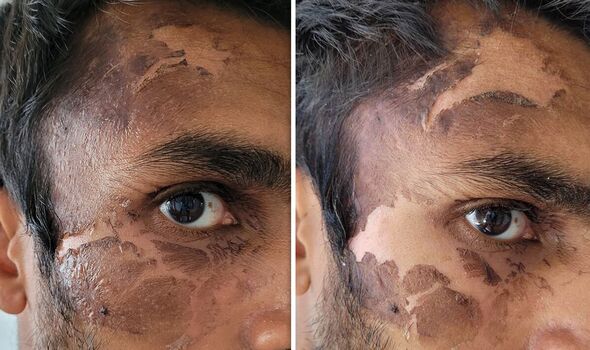 A man who threw tea and boiling water at police officers, leaving one with horrific burns, has avoided jail. Astrit Mala, 47, assaulted two police officers in July while they were trying to aid council staff in evicting him from a property in West London.  As the police entered the flat, Mala threw cups of tea at officers and then threw boiling water at one of them, causing painful facial burns. Mala also racially abused officers and threatened to kill them during the incident. He was arrested at the property on suspicion of causing grievous bodily harm with intent, making threats to kill, and a racially aggravated public order offence. On December 7, Mala plead guilty to two counts of assault on an emergency worker and a racially aggravated public order offence.

He received a 26 weeks prison sentence – suspended for two years – and was ordered to pay £500 in compensation.

Mala will also undergo a rehabilitation activity requirement of up to a maximum of 40 days.

The outcome was published on Thursday morning by local police in Ealing, with many members of the public expressing their bafflement online.

Many felt the sentence was too lenient given the nature of the attack.

As quoted by the Daily Mail, one person said: “Pathetic and hardly a deterrent to others.”

Another said: “A racially aggravated attack on a serving police officer. They wonder why people aren’t joining. This is one of the factors. Start protecting the protectors properly.

“No one comes to work to get assaulted or leave with lifelong scarring.”

Another said the sentencing was a “shambles”, while author Phil Cleary argued that the sentence should be appealed, adding: “Where is the deterrence?”

One officer also said: “A suspended sentence for that? Shocking work from the courts once again. Hoping your officers recover quickly.”

Public anger has led to the Met Police producing a statement. It highlighted just how frequent these kinds of assaults on officers are.

The Met Police statement said: “All too often officers suffer assaults, threats and abuse on duty. There are an average of 135 physical assaults against Met officers and staff every week.

“Every assault is shocking and can have devastating consequences for the victim. These offences must be taken seriously.

“Sentencing is a matter for the courts and is out of the hands of officers. However, we recognise the strong views that have been shared in relation to the decision to suspend the sentence in this case.

“In reaching their decisions, the courts take into account a number of factors including but not limited to any previous criminal history, the timing of any guilty pleas and information put forward by agencies including social services and probation.

“In this case consideration was also given to medical reports that were ordered by the court prior to sentencing to provide information on the defendant’s mental health.

“We are in touch with the Crown Prosecution Service to fully understand the factors that led to this sentencing decision and to consider what, if any, further representations may need to be made.”