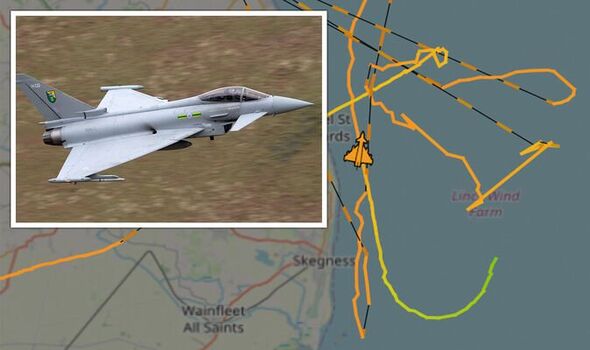 The warplane sent the signal today as it flew over Sutton on Sea. Its route shows it dropping to some 2,000 feet above sea level. The RAF has been approached for comment.

The 7700 squawk code is designed to alert Air Traffic Control to an aircraft in distress and can often be used to indicate a technical or engineering issue with an aircraft.

Flight tracking platform adsbexchange.com shows the Typhoon looping over the sea near Sutton on Sea, Chapel St Leonards and Skegness at an altitude below 2,500ft with a groundspeed up to 500mph.

The Typhoon model is a fourth-generation, multi-role combat aircraft with its most essential role to provide quick reaction alert in UK airspace.

Typhoon detachments have also reinforced NATO defences over the Baltic Sea and Black Sea, according to the RAF.

The Government announced last week that Typhoon fighter jets will be fitted with the world’s most advanced radar as part of a £2.35billion investment.

In its announcement, the Government said the state-of-the-art European Common Radar System (ECRS) Mk 2 radar will transform the Eurofighter Typhoon’s control of the air as well as allow the aircraft to simultaneously detect, identify and track multiple targets in the air and on the ground.

Minister for Defence Procurement, Jeremy Quin, said: “It’s vital the UK remains at the forefront of military capabilities to be able to deter and defend.

“These technological enhancements will maintain the cutting-edge capabilities of Eurofighter Typhoon and help underpin the development path towards the Future Combat Air System.”