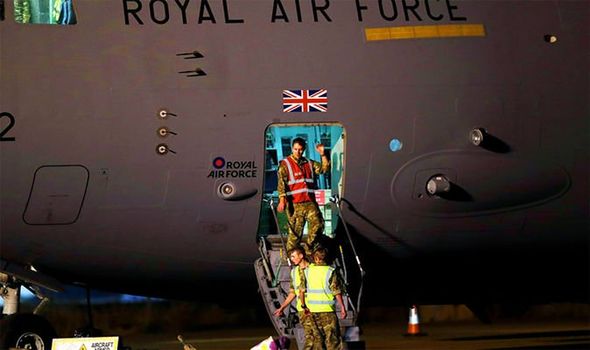 Images released yesterday showed how every inch of the hold of the RAF cargo planes was filled with desperate Afghan refugees, British citizens and the meagre possessions they were able to carry out of the country as it fell to the Taliban.

In a tweet, the RAF’s 99 Squadron, who flew the C-17s, tweeted: “Our normal limit for persons on board is a total of 138. We more than tripled this on a daily basis for the last two weeks.”

One C-17 Globemaster had 436 people aboard, which 99 Squadron said was the biggest capacity flight in RAF history.The USAir Force reported that it managed to get 823 people aboard the same model of aircraft during the evacuation.

While more than 15,000 people were evacuated by the UK after the fall of Kabul on August 15, at least 5,000 people who are entitled to come to the country are feared to have been left behind.

These include hundreds of interpreters who aided British troops over the past two decades and around 100 to 150 UK nationals also unable to get on to evacuation flights.

British troops arrived back in the UK on Sunday after ending their Afghan operation.

James Cleverly, the UK foreign minister, said it was impossible to say how many people were left in Afghanistan who were eligible to come to the UK.

However, he said the “vast, vast bulk” of British nationals had left Afghanistan.

But there were also eligible people under the Afghan Relocations and Assistance Policy (Arap) scheme – for those who had helped UK forces – and others who could be under threat from the Taliban.

The UK has pledged to continue seeking international agreement to ensure the Taliban sticks to its commitment to allow safe passage for Afghans and foreign nationals who want to leave Afghanistan.

A series of diplomatic meetings will be held this week, with Foreign Secretary Dominic Raab set to hold talks with Turkish and Qatari officials.

One Afghan who aided the British Embassy, the British Council and went on foot patrols with UK troops, said: “I tried for four days and four nights. I tried every possible way to get into the airport but I couldn’t even get within 10 metres of the gate.

“It was not just the number of people. The Taliban were hitting people.They hit me and my wife, I got an injury and she was left unconscious.”