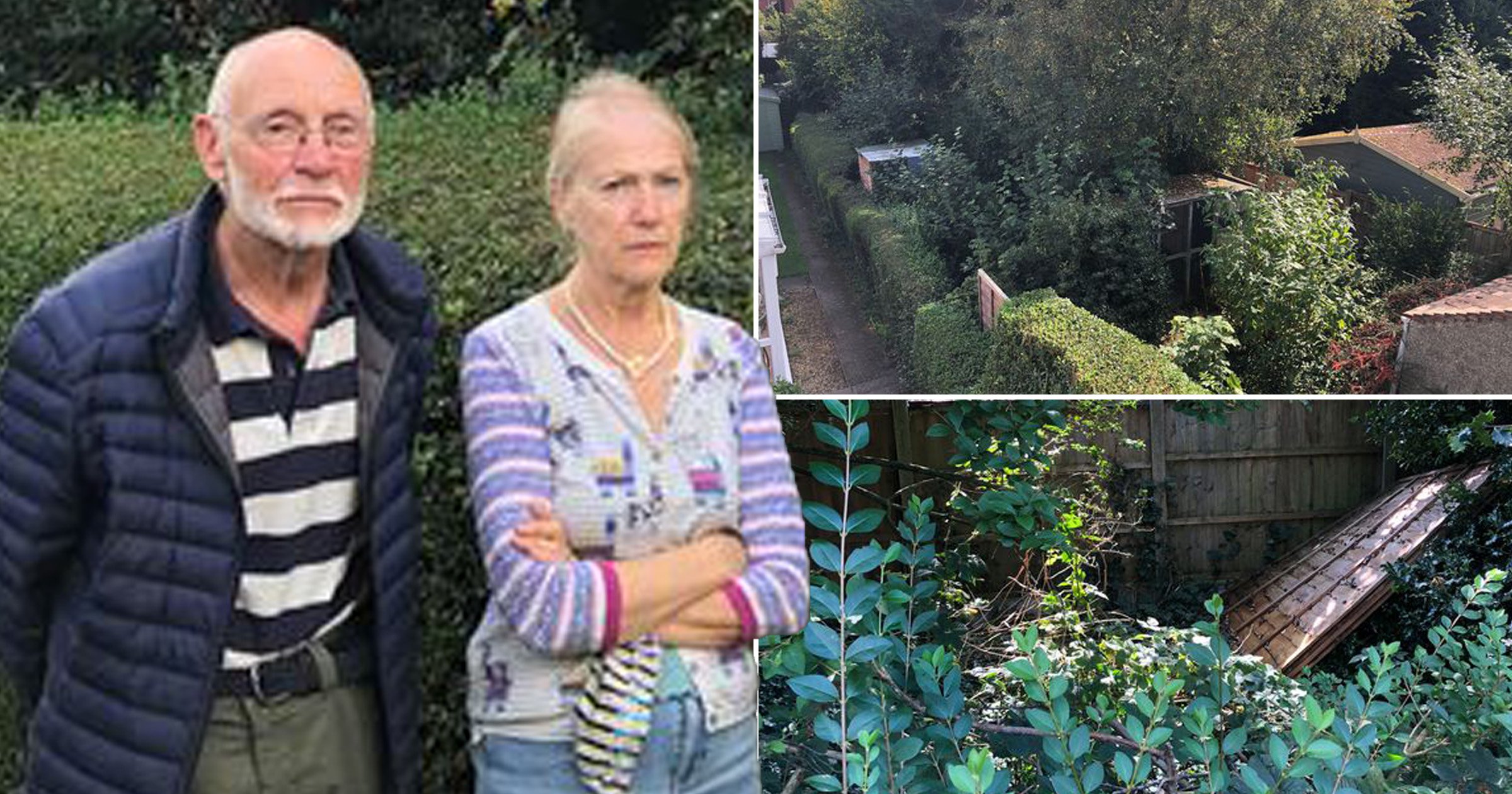 A retired RAF musician who once played for the Queen feels trapped in his ‘unsellable’ Midlands home which is being marred by an overgrown garden next door.

Fred Sweenie, 82, believes the neighbour’s house was abandoned 15 years ago.

A hedge has been left to grow to an overbearing height and it now blocks all sunlight from the house he shares with his wife Janet, 69, and their son Guy, 36.

There have been issues with rats coming into his garden, and trees and weeds have sprouted.

Mr Sweenie said an estate agent told them the neighbouring garden was knocking £20,000 off the value of their home.

The saga has affected his health and his family fear it might not be resolved while he is alive.

Mr Sweenie, who moved in to Rugeley Road in Burntwood in 1982, said he first complained to Lichfield District Council about the garden 12 years ago.

He said: ‘It really started to go wrong around 20 years ago. There was a serious neglect of the garden. It looked like there was no money being spent on repairs at the house.

‘By 2017, the garden next door was having a serious impact on our health and wellbeing. Rats had started to appear in our garden and we could see the holes where they were coming in. We reported it to environmental health. No response there.’

Mr Sweenie said that things became so bad that he eventually contacted MP for Lichfield Michael Fabricant, who ‘was fantastic’.

His intervention led to the council undergoing a full investigation into the property – but the local authority said there was nothing they could do.

Mr Sweenie said: ‘When they did undergo a full investigation, they said that the property was occupied and that, apart from one shed that was full of food waste that had to be knocked down, there was no need to do anything else.

‘When they told me that, it felt like someone was stabbing me in the chest.’

Mr Sweenie’s wife and son said the saga has affected his health and have called for another investigation into the property before it is too late.

Son Guy said: ‘I have no doubt that the whole process was making dad very ill. If they take this long, I have to ask the question, is he going to live to see the changes?

‘We might be waiting another two years before work starts on the garden next door. They told us that any materials next door could not be removed because they are “inert”. What does that even mean?’

Mrs Sweenie, a music teacher, added: ‘We are at our wits’ end. I am totally on the limit here. I just think it’s so wrong. Our bedroom overlooks the back garden and it is the first thing I see in the morning when I open my curtains. It makes you feel depressed.

‘Our quality of life has deteriorated given the state of the garden. It just feels we are running out of time.’

Mr Sweenie said he feels like he is being let down by the country over the way his complaints have been handled.

‘If you cannot treat respectful citizens such as myself with compassion, it says something sad about society,’ he said.

‘I’ve played for Her Majesty the Queen and at Westminster Abbey and at the opening of Birmingham Symphony Hall.

‘We have never been impolite or unprofessional but we are not happy. We want them to acknowledge that it is having a negative impact on our lives.

‘To do all of the things that I’ve done I am now being treated as a second-class citizen. People should be treated with more respect.’

The council’s head of corporate services Tracey Tudor said: ‘We have found that, although is overgrown, it has a clear path from either end, has plants rather than weeds, and is not covered in litter or dumped items.

‘The owner has told us that he likes his plants and trees to attract wildlife. While the garden may not be to everyone’s taste, we do not believe it breaches any planning laws that govern complaints of this nature, and when comparing it to similar cases.

‘We are continuing to monitor the situation and are working with the owner who has agreed to cut back some of the vegetation after September so as not to affect any birds, which we think is a reasonable compromise.’