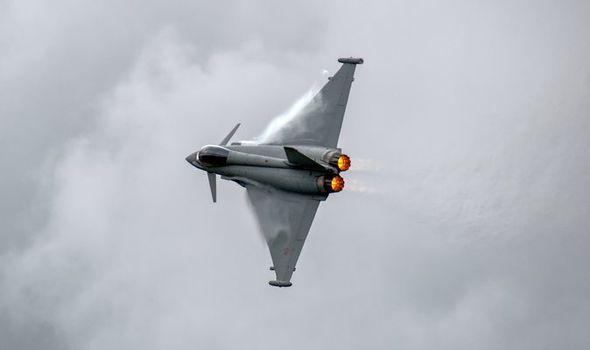 According to Ministry of Defence figures, nearly £10,000 of taxpayers’ money has been paid to householders complaining of sonic boom damage over the last six years. Successful claims have ranged from cracked windows and greenhouses to falling pictures and even a road accident caused by the sudden noise. Though it is technically illegal for aircraft to fly at supersonic speeds over UK soil, exceptions are made for “operational reasons”.

These are almost always related to scrambles by the RAF’s Quick Reaction Alert Force whose Typhoons, based at RAF Lossiemouth in Scotland and RAF Coningsby in Lincolnshire, are charged with “protecting the United Kingdom’s skies”.

While most QRA reports relate to Russian fighter jets and bombers approaching UK airspace, these do not usually result in sonic booms over land because most are anticipated following a warning from Nato allies.

Where the order to quickly “Clear High Speed” is more often given is in cases where an aircraft has lost communications with air traffic control – sparking fears of a 9/11-style attack.

Though most cases concern broken glass and dislodged roof-tiles, other more surprising claims have included damage to a freezer, garden furniture and a TV.

According to an official MoD document, the entry for a claim in Cambridgeshire June 5, 2014 reads; “startled by noise – car accident” while another entry for the same day and county reads: “Damaged patio doors and chandelier”.

Records show that, on that day, two QRA Typhoons were launched from RAF Coningsby and “authorised to go supersonic over land” to investigate a civilian aircraft which had lost radio contact with the tower. It soon re-established comms and the fighter jets returned to base.

On May 2, 2016 the RAF received 15 claims following a boom over large parts of Yorkshire.

Though most were for damaged windows and ceilings, the seven claims which the MoD settled included one for a cracked fish tank.

QRA Typhoons had been scrambled after an Air France passenger jet lost contact with air traffic control. They helped to guide the flight safely to Newcastle where it landed.

On January 12 last year, a boom was heard over large parts of London following another incident involving a civilian aircraft which had lost contact with the tower.

In this case, QRA Typhoons, flying at 40,000 feet, reached a speed of 1,050mph before reaching the plane and escorting it to Stansted airport. The speed of sound for an aircraft at that height and speed is just 660mph.

That incident prompted eight claims in Cambridgeshire and Essex – which are still being investigated – including one for a damaged television and one for a picture which is said to have fallen off a wall.

The effect of a sonic boom can depend on weather conditions, such as if a fighter jet achieves supersonic speed under a blanket of cloud which can amplify and sound and spread its shock waves further.

In a statement, the RAF said: “The nature of sonic waves means the aircrew would not necessarily know if they had created a shock wave, which in turn would create an audible sonic boom on the ground in any part of the UK mainland.”

Speaking last night, UK Flight Safety Committee ceo Air Commodore Dai Whittingham, formerly in charge of the RAF’s low flight system, said: “Sonic booms are allowed over land in certain circumstances – there must be an operational need – and it is right that the public should be compensated if they’ve suffered a loss.

“It is unlikely, in my view, that a fish tank would be cracked when windows weren’t – unless they were all open – but there are times when, if an investigation shows there is a small even a chance a claim could be valid, it is better value for the MoD to pay than take the case to court.”