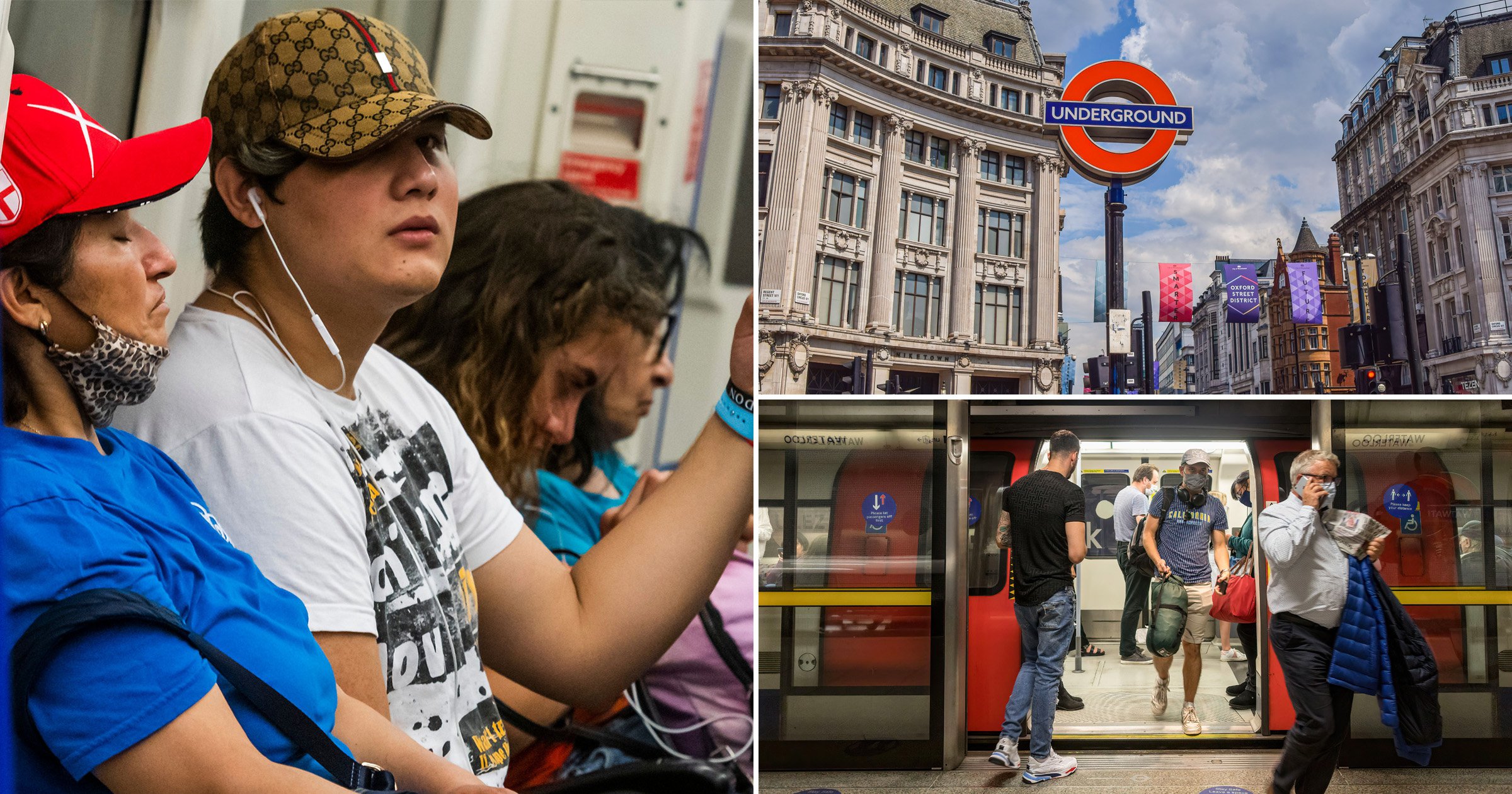 Tensions are rising over masks on public transport as passengers and staff claim the number wearing them is falling because of lack of enforcement and confusion over rules.

Travellers have told Metro of arguments and confrontations — including people exempt for medical reasons who say they have been abused.

One train guard trying to enforce rules in Newcastle reported being ‘threatened with being spat at and coughed on, as well as with having my own face mask ripped off’.

A rail worker in the West Midlands said: ‘We are abused and intimidated. At the end of the day, we are human, putting our lives at risk daily for the public.’

But even police have been spotted not wearing masks, including an officer pictured on a busy South Western train from Richmond to Waterloo in London.

British Transport Police confirmed all officers were told to wear coverings — but said the officer may be exempt.

Confusion has grown since the government scrapped a legal requirement for masks on public transport in England in July — although they are still compulsory in Scotland and Wales.

Most major train operators in England have mandatory mask rules, including Transport for London. But legally it is only a ‘condition of carriage’ and not an offence punishable with a fine.

In July, London mayor Sadiq Khan insisted face coverings would still be compulsory on the Tube and buses, warning: ‘We’ve got hundreds of enforcement officers to make sure people are following the rules.’

TfL has confirmed 400 officers are enforcing the rules — but only 220 passengers have been stopped from travelling between July and September for not wearing masks.

Yesterday, a spokeswoman for Mr Khan said he had lobbied the government to bring back mandatory masks and allow it to change legislation and by-laws to allow fines.

She added: ‘However, ministers have refused to reintroduce the national regulations or work with the mayor and TfL.’

TfL estimates 82% of customers use masks ‘at all times’, while the Rail Delivery Group of operators insists ‘the vast majority of people are still wearing face coverings, especially at busy times’.

Former Conservative transport secretary Steve Norris observed this week that on his ‘packed’ Jubilee train ‘about 30% not masked’.

Journalist Elizabeth Blunt tweeted: ‘Far too many people travelling without masks. Let them infect each other, not the rest of us. Please can we have non-mask carriages as there were once smokers’ carriages on trains?’

Another wrote: ‘I don’t want to be a prisoner in my own home because people won’t mask up on public transportation.’

Londoner Elyse Millar, 42, who was attacked last year at Clapham South Tube station after asking a fellow passenger to wear a mask, said: ‘I view them as very selfish and I reckon they are putting themselves at risk as much as other people.’

Disease control expert Dr Peter English said: ‘I remain horrified that people who have no choice but to use public transport or go shopping can be put at risk by people who refuse to wear masks. They are a very minor inconvenience and considerably reduce the risk.’

Conservative MPs came under fire yesterday for setting a bad example when many did not wear masks in the crowded House of Commons — although most of their Labour opponents did.

SNP shadow Commons leader Pete Wishart warned it ‘increased the risk’ of Covid but his Tory counterpart Jacob Rees-Mogg insisted the chamber had not been ‘particularly full’.

Unite union leader John Murphy said he was ‘extremely concerned’ over falling mask use, adding: ‘This is a critical health issue. The government must avoid dithering and delay again.

‘The suggested review on the return of mask-wearing in October must be brought forward immediately with rules to wear masks in confined indoor spaces swiftly reintroduced.’

A spokesman for the TSSA union said: ‘Face coverings should be mandatory on public transport until the pandemic is over. We have no doubt there’s strong support among passengers.’

A spokesman for the department for transport said there were no plans to change current rules in England.