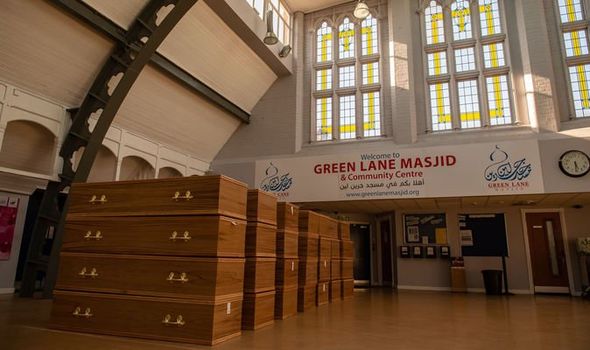 Eerie photographs from one mosque in Birmingham shows coffins being stockpiled in preparation to be used as it noticed a sharp rise in the number of funerals in recent months. The month of Ramadan, which started last Friday, is a special time for more than a billion Muslims all over the world.

But due to lockdown regulations, congregational acts of worship outside people’s houses and iftars – the ritual meal marking the breaking of fasts – will not happen.

The Muslim Council of Britain issued guidance on how to safely celebrate Ramadan during lockdown.

It included streaming Islamic lectures or Tarawih prayers, taking part in iftar at home and using video calls to replicate eating with friends and family.

It also issued advice to workers – particularly those in health care – to hydrate well ahead of long working days and eat high energy, slow burning foods to remain energised throughout the workday.

Kamran Hussain, a committee member at the mosque, said: “The typical activities of opening the fasts together with family and friends, the nightly congregational prayer, the seclusion in the mosque for some people in the last 10 days, will all be impossible given the current situation.

“There is usually a real sense of community over this period that is felt by everyone coming together to eat, pray and worship each day.”

Mr Hussain said the mosque usually feeds around 300 people every day during Ramadan and would have 60 people stay over each night.

And more than 60,000 were expected at the annual Eid celebrations at the end of Ramadan in Small Heath park.

But now the mosque is focusing on its increased funeral service, with burial rates jumping from around five to 25 per month since the pandemic started.

He added: “At the mosque we have already closed the doors and are now focused on dealing with the increased funeral services and burials, through our Funeral Service.

“Additionally, we have launched a COVID-19 Support service to arrange food shopping and deliveries for the vulnerable. 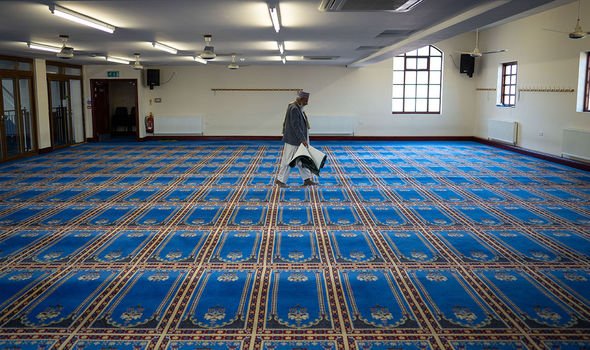 “Many of our welfare clinics and surgeries are now taking place over the phone.

“And our foodbank is now busier than ever.

“We have launched a listening service for those who may feel isolated and need to talk to someone.

“We are also about to launch a service with Macmillan to see if we can support any cancer patients. “

In Sheffield, the Jamia Ghausia Mosque delivered its traditional Ramadan prayers on Friday night with worshippers listening on radios supplied by the mosque.

Imam Hafiz Hazoor Bakhsh delivered Tarawih prayers on Friday which Muslims could read at home as they began Ramadan.

Whaid Nazir, a committee member at the mosque, said the service – which the mosque intends to keep up throughout the month – provides a “lifeline” to worshippers.

The 500 or so worshippers at the mosque will take part in prayers remotely for the first time since it opened more than 30 years ago.

Mr Nazir, 51, said: “This is the first time anything like this has ever happened.

“I have been coming here since I was a child, I have never, ever seen anything like this, it is unprecedented.

“The imam has to come in on his own to keep the spirit of the mosque going and he delivers prayers that are broadcast on a radio system.

“The broadcasts are a lifeline for the people that cannot come to the mosque.”

Mr Nazir said that worshipers at the mosque had to re-evaluate their plans to break their fasts after sunset – with people often gathering to eat together.

He added: “People come to the mosque more than usual during Ramadan, it’s a very special time of the year for our faith.

“People can’t come together and eat together, they have to plan it differently this year and stay at home.”

Mr Nazir said the mosque was looking to the possibility of streaming prayers online throughout the month.

He added: “These things happen and we have to work around it.

“It’s something new, but we are looking into the possibility of expanding it so more people can experience prayers.

“We are looking to do stream them live on YouTube or Zoom if we can get the equipment together.”