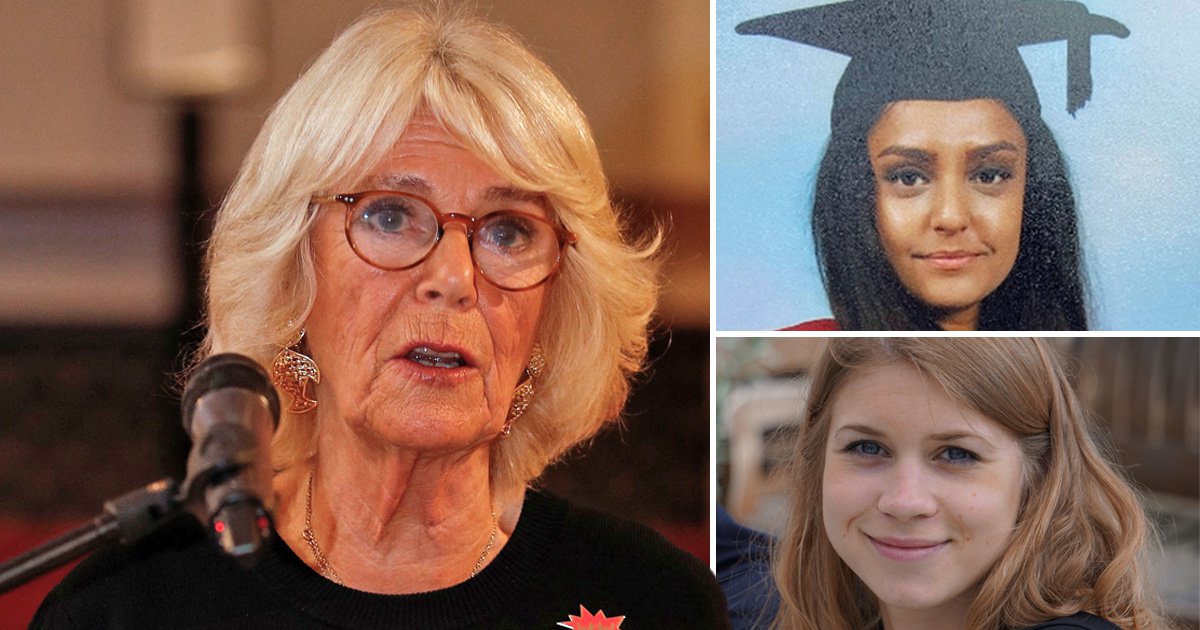 Camilla, the Duchess of Cornwall, has called for action to stop violence against women in the wake of Sarah Everard’s murder.

She said rapists ‘are not born’ as she paid tribute to those whose lives have been ‘brutally ended’ in an impassioned speech for a festival against sexual violence.

Calling for a ‘violence-free world’, Camilla remembered a number of women who were brutally killed, including Sarah and Sabina Nessa, at a reception for Shameless! at the Wellcome Collection in London.

While urging for their names – and those of murdered Wenjing Lin, Geetika Goyal and Bennylyn Burke – to ‘never be forgotten’, she recalled a ‘searing’ victim impact statement read out in court by Sarah’s mother, Susan.

Urging men to do more to in the fight against sexual violencem, the duchess said: ‘We do not, in any way, hold all men responsible for sexual violence. But we do need them all on board to tackle it. After all, rapists are not born, they are constructed.

‘And it takes an entire community – male and female – to dismantle the lies, words and actions that foster a culture in which sexual assault is seen as normal, and in which it shames the victim.

‘So let us all leave here today and try and get the men in our lives to participate in building a shameless society.’

She also paid tribute to Sarah’s mother standing before her daughter’s killer and reading out her feelings.

After quoting from the statement, Camilla added: ‘I know that all of you here today join me in paying tribute to all these precious lives that have been brutally ended, and in renewing our commitment to do everything we can to bring about the end of violence against women.’

In September, Metro.co.uk pictured all of the 80 women ‘killed by men’ since Sarah’s murder by serving Metropolitan Police officer Wayne Couzens.

Camilla recalled how, on the same day that Couzens was arrested, a survey was published stating that 86% of young women in the UK have been sexually harassed in a public space.

Camilla added that a crime survey for England and Wales showed that 144,000 women were victims of rape or attempted rape in the last year – roughly 16 an hour.

There was some cheer at the ceremony, ahead of which, Camilla met with Jude Kelly, founder and director of the Women of the World (WOW) Foundation, and Julia Gillard, chairwoman of Wellcome, which is supporting the festival.

Carrie Johnson, who is understood to have been personally invited to the event by the duchess, was seen practising her curtesy ahead of Camilla’s arrival.

At the start of the event, Camilla took to the stage alongside Ms Kelly and former Australian prime minister, Mrs Gillard, who asked if she should refer to Mrs Johnson as the ‘First Lady’ – to which the Prime Minister’s wife replied ‘Absolutely not!’ and laughed.

A glass of wine was seen knocked over behind Mrs Johnson at the same moment and Mrs Gillard jokingly apologised and said that in Australia they have a ‘First Bloke’.

Camilla said she hoped the Festival – a collaboration between the WOW, which she is president of, and Birkbeck, University of London’s SHaME (Sexual Harms and Medical Encounters) project – could improve the situation.

‘Together, today, let us resolve to support survivors to be “shameless” and not to take on misplaced feelings of stigma,’ she said.

‘Through speaking up about our experiences, we break the wall of silence that allows perpetrators to go unpunished and increases the feeling of isolation that so many survivors describe.’

She also urged men to get involved, saying they need to be ‘on board’ to tackle violence against women.

‘Because how many more women must be harassed, raped or murdered before we truly unite to forge a violence-free world?’ Camilla, a patron of the Mirabel Sexual Assault Centre in Lagos, asked.

In 2017, Camilla worked with Boots to launch the Wash Bag Project, a scheme that provides a wash bag of toiletries to sexual abuse survivors across the UK.

In March last year, she spoke about domestic violence at the Women of the World Festival and recorded a video message for the United Nation’s Day for the Elimination of Violence Against Women in November.

Labour MP for Walthamstow Stella Creasy, who also was at the event, said: ‘I think this is such a powerful, potent, and timely festival that they’re organising.

‘I was blown away by what the Duchess of Cornwall said. I think it shows that there is a revolution taking place where women are not going to take it anymore. I think this festival could be a powerful part of that.’

The Shameless! Festival will take place at London’s Battersea Arts Centre on November 27, where it aims to ‘bring together activism and art to confront and change attitudes towards sexual violence’.