It was one of only 600 such bottles made at the Burgundy estate in France and is set to fetch £8,000. But experts say it could go for even more as the most expensive wine ever sold at auction was also from the Romanee Conti estate. This bottle was discovered tucked away in the corner of a wine cellar by a man searching for an appropriate tipple for his diamond anniversary with his wife.

It was originally sold by Andre Noblet – the head wine maker at Domaine Romanee Conti since 1948 – to a French client in Lozere in Languedoc-Roussillon in 1963.

It was gifted to the current owners shortly afterwards and has remained in their Wiltshire cellar ever since.

Dreweatts, who will sell the bottle on April 29 at its fine and rare wine and spirits sale, said the bottle has “excellent provenance and was stored in perfect cellarage condition”.

Grand Crus are known for their longevity. It is not recommended to drink them before they are 10 years old, so it is likely the rich flavour of the pinot noir grape will only have been enriched over the decades.

Speaking of Romanee Conti, wine critic Clive Coates said: “The scarcest, most expensive – and frequently the best – wine in the world. 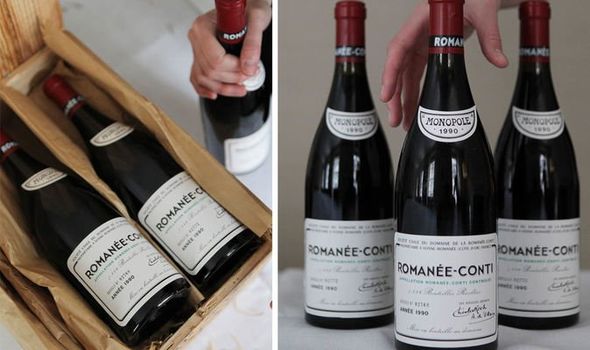 “This is the purest, most aristocratic and most intense example of pinot noir you could possibly imagine. Not only nectar: a yardstick with which to judge all other Burgundies.”

Mark Robertson, head of Dreweatts’ wine department, said: “The fact that its history can be traced directly all along its journey from the Romanee Conti estate and it has been so perfectly preserved, makes this even more exciting.”

Chinese collectors desperate to own the wine are thought to have driven the auction price up.