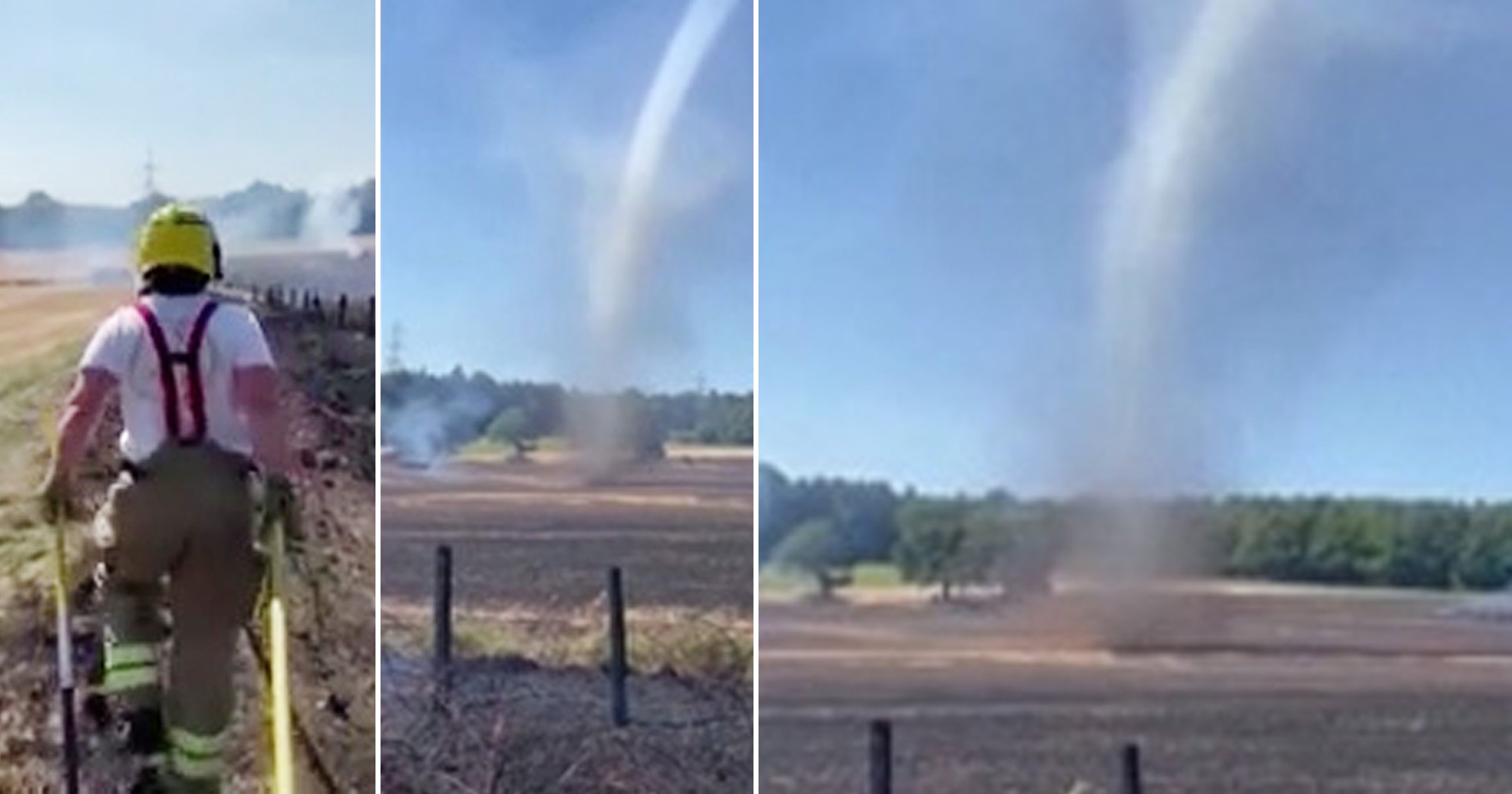 Firefighters battling a wildfire watched stunned as a ‘tornado’ ripped through the still-smouldering field.

A crew filmed the freak weather phenomenon – which turned out to be a rare ‘dust devil’ – rampaging through charred countryside and into the sky in Brandon, County Durham.

Sparked by extreme heat and hardly ever seen in Britain, the potentially deadly whirlwinds are usually whipped up in the world’s hottest spots, including Death Valley, California.

One shocked viewer of the footage compared it to the tornado that thunders into Kansas at the start of Wizard Of Oz.

County Durham & Darlington Fire and Rescue Service shared footage of the towering twister on Friday churning up debris and hot ash while speeding in front of their hoses as they continued to make sure a wildfire had been quelled.

The service tweeted from their @cddfrs account: ‘Here’s something you don’t see everyday! This is a dust devil from a wildfire in Brandon this afternoon.

‘Dust devils form when a pocket of hot air near the surface rises quickly through cooler air above it, forming an updraft. Some may say it is out of this whirl! #HereAllWeek.’

Twitter user Tony Warne commented on the clip: ‘Well, that’s another one to tick off on my “stuff that we didn’t expect to see already in 2022.” #ClimateChaos bingo card.’

Another, @Lophophanes, added: ‘Very dangerous in this context, as it can carry burning embers a long way to start new fires!’

Sobering figures have emerged showing they are under more strain than ever while tackling the most severe effects of climate change yet in Britain.

While wildfires blaze across the nation as it is roasted by the second record-breaking scorcher of the summer, a Guardian analysis of publicly available data said total firefighter headcount across 46 English fire authorities has fallen 20.4% since 2010 – with 35,279 in 2021 compared with 44,307 in 2010.

Some fire and rescue services have had government funding cut by more than 40%, with some brigades losing up to £22million.

Andy Dark, the Fire Brigades Union’s assistant general secretary, said: ‘Just over a fortnight ago firefighters had to deal with many serious wildfires across much of the country.

‘Several firefighters were injured and many people lost their homes. If we are to properly protect life and property from wildfires the fire service urgently needs huge investment.’