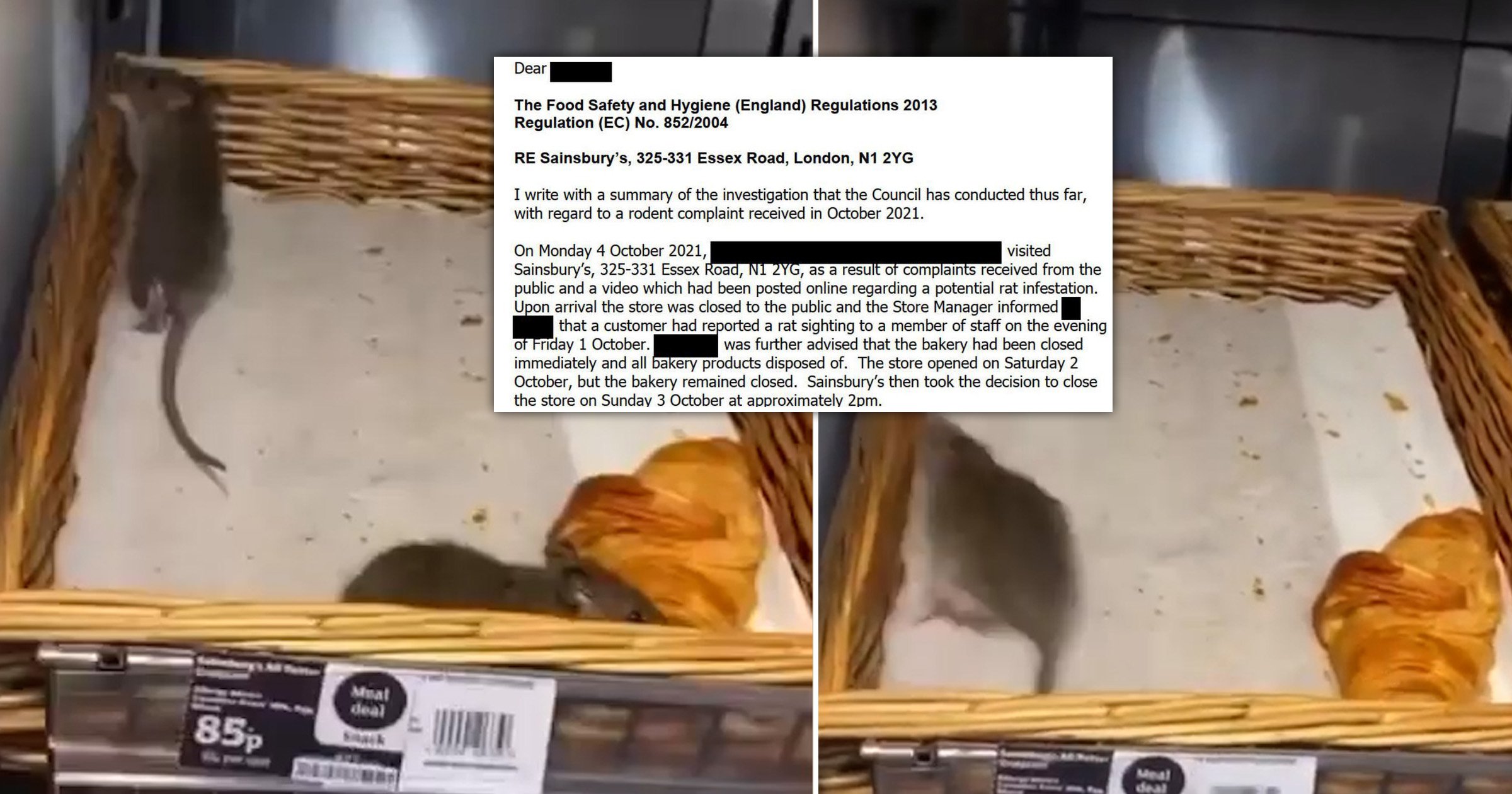 Rats infested a Sainsbury’s store after scuttling up from sewers into ceiling voids above a bakery, according to a newly-released report.

Health inspectors visited the branch after a video was posted online showing two rodents crawling over a croissant in the pastry section.

A redacted letter shows that pest contractors who also went to the supermarket in north London found rats had accessed the voids.

Droppings were also found around an external manhole gully outside the ‘Local’ store on the Essex Road in the borough.

The letter sent to the supermarket shows that pest records kept by Sainsbury’s detailed ‘ongoing issues with rats during 2021, particularly relating to the external areas and the bakery and chiller areas’.

The council’s investigation found that ‘housekeeping/cleaning’ in relation to the issues was only being ‘intermittently maintained’ despite rodent issues being identified.

Proofing works were due to take place at the time rat activity was spotted by staff in the bakery last September, around three weeks before the video clip was taken.

The council found: ‘The overview of the pest records submitted shows there were ongoing issues with rats during 2021, particularly relating to the external areas and the bakery and chiller areas.

‘Many of the pest reports stated housekeeping/cleaning was required, and this was being intermittently maintained. There was also a number of pest proofing issues identified by Rentokil that appeared to take some time to repair and is likely to have contributed to allowing access to pests.

‘The more recent rat activity was identified by staff in the bakery area on 15 September and again cleaning and proofing works around the chillers and ceiling void were identified by Rentokil on these subsequent visits.’

Film-maker Anthony Mitson took the footage of the rodents scurrying over a fresh pastry box as he visited the store in October 2021.

The unwelcome visitors were gorging on the last croissant in the open stand before they spotted him and ran off behind a dairy section. The clip quickly went viral after Mr Mitson shared it online.

In the letter, the council said it visited on October 4 ‘as a result of complaints received from the public and a video which had been posted online regarding a potential rat infestation’.

The store was closed to the public at the time, following a customer reporting a rat sighting to a member of staff three days previously.

Rentokil, the on-site pest contractor for Sainsbury’s, was at the branch carrying out ‘treatment, monitoring and investigations’.

Sainsbury’s said at the time the video footage emerged that it had taken ‘immediate action’ to clean the store and had called in the contractors.

The letter states: ‘It was understood rats had gained access to the ceiling voids and there were entry/exit points above the adjacent retail chillers. [REDACTED] enquired about the drainage system and found droppings around the external manhole gully.

‘[REDACTED] sent a follow-up letter requesting pest control reports, pest control procedures, due diligence checks records, and an action plan on how the company proposed to deal with this to prevent a reoccurrence.’

The unnamed inspector revisited the premises two days later, according to the document released by the council after a Freedom of Information Act request by Metro.co.uk.

Sent in February 2022, the letter from the council’s Public Protection Team continues: ‘During this visit, [REDACTED] was advised that the rats had entered the premises via the sewer system where they had gained access to the ceiling void area above the bakery.

‘[REDACTED] was advised that all pest proofing issues were being repaired and sensors and cameras were being fitted for continued surveillance of the rodent infestation.’

The store reopened on October 11, with Sainsbury’s advising that it was satisfied there was no longer any rodent activity.

The letter states: ‘The root cause was identified as problems with the drainage system, including a collapsed drain, and it is understood that this, and all other necessary repairs within the premises, has now been completed. However, this drainage system area was not investigated until [REDACTED] conducted the visit.’

A Sainsbury’s spokesperson said, ‘All our stores have strict pest control and hygiene processes. These were in place at our Essex Road store and additional, immediate steps were taken at the time of this incident last year. The council and Environmental Health confirmed they were satisfied with the steps which were taken at the time.’