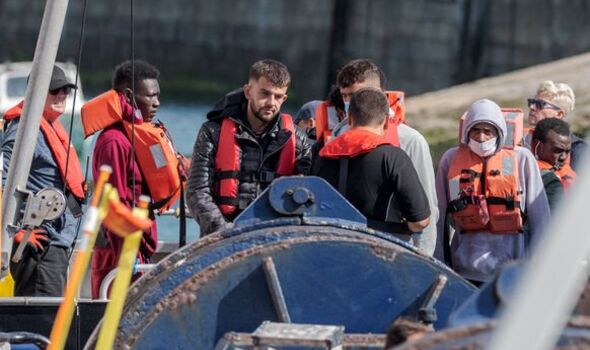 The Ministry of Defence said 1,295 arrived in 27 boats, soaring past the previous high of 1,185 last November.

Border officials said the journeys had become relatively safe, with the Royal Navy detecting nearly everyone.

Smugglers now use much bigger boats and their prices are said to have fallen to between £2,000 and £3,000 a head.

Government sources suggest the crooks may be trying to clear a backlog of people waiting to make the journey. And officers have seen a huge increase in Albanians, as many as four in 10, according to official figures.

It is feared the rise may be linked to crime gangs replacing people arrested or deported by the Home Office.

The number in 2020 was 8,404. Lucy Moreton, of the ISU union representing Border Force officers, said: “This is driven by organised crime and likely to be fuelling organised crime here.”

“We are certainly seeing much larger boats. We have gone from 12 to 15 on a small rib to, I think the largest number we saw yesterday was 59 people in one boat.”

“The prospect of being sent to Rwanda is not a deterrent at all. If anything, it is encouraging crossings as smugglers encourage migrants to travel now before the policy comes in.”

Gessica Lastrucci, a volunteer at Care4Calais who works with migrants at the French port,  said many wrongly believed the Rwanda flights were finished.

She said the future of the Rwanda scheme hinges on a court case next month.

A government spokesman said: “Under our new migration and economic development partnership with Rwanda, we are continuing preparations to relocate those who make these unnecessary and illegal journeys, helping to save lives by deterring others from crossing.”