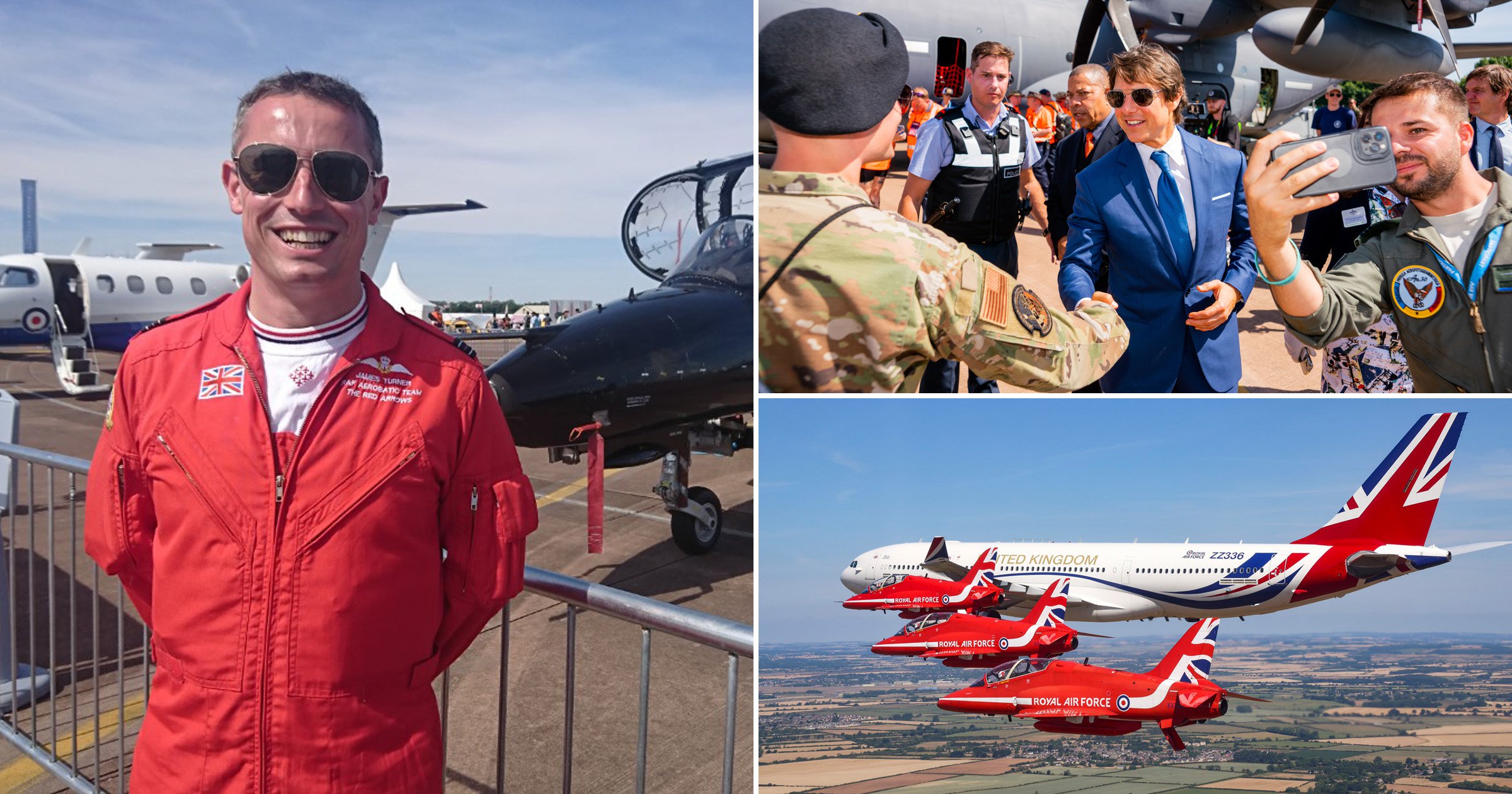 A Red Arrows ace has told of his love for the ‘amazing’ new Top Gun film as Tom Cruise made a surprise cameo with the daredevil team at the world’s biggest military airshow.

Flight Lieutenant James ‘JT’ Turner and his fellow pilots claimed the Hollywood star for one of their own after he turned up fresh from his blockbuster turn reprising Maverick.

Cruise, 60, was among the celebrities and VIPs on the ground at the Royal International Air Tattoo (RIAT) in RAF Fairford, Gloucestershire.

He posed with the Reds after the aerobatic team had thrilled the crowds by painting the skies red, white and blue and flying in formation with an RAF VIP Voyager aircraft displaying the union flag on its tailfin.

The seven pilots took to the skies in heatwave conditions that left them sweltering in their cockpits but nonetheless put on an exhilarating show before meeting fans, giving talks and spending time with Cruise, whose character pilots an F-18.

The A-lister, who wore shades, a navy blue suit and matching tie, posed for selfies and beamed and waved during his cheerful appearance as the aviation world descended on the Cotswolds. His attendance had been kept under wraps by the organisers.

Flt Lt Turner, speaking in the event’s Techno Zone shortly before meeting the actor, told Metro.co.uk: ‘It’s a great film. I saw the first one years and years ago and it was amazing. I think that’s what got lots of people into flying suits who you see walking round.

‘It piqued their interest in the flying world and this film’s amazing. It’s good fun, there are a few bits that might not be 100 per cent accurate but actually it’s great going to see it and to see something that I do and love getting shown to more and more people.’

The Reds were ‘melting’ in their cockpits as the country endured blazing summer temperatures yesterday but nevertheless put in an enthralling show on the first full day of the weekend event.

Carol Vorderman, who hosted talks about space and aviation, and UK astronaut Major Tim Peake, who was mobbed by young fans, were also among the celebrities and VIPs on the ground.

Flt Lt Turner, 38, told how pilots at the show have ‘flutters’ in their hearts as they prepare to take off from one of the longest runways in the UK.

‘RIAT has always got a special place in the heart of all display pilots,’ Red 7 said. ‘It’s the biggest show in the UK, it’s very famous and there are so many different aircraft and so many different countries coming over here, so it’s awesome to be part of it.

‘Everyone gets little flutters in the chest when they’re on the runway, powering up then pretty much when you get airborne you’re thinking about what you’re doing and trying to put on the best show possible.

‘Every now and again you take a little glance down and see tens of thousands of people.’

The Reds are due to complete flying their Hawk T1 jets alongside different aircraft on each day of the show, which got underway on Friday afternoon.

On the opening day the team was joined by a Poseidon MRA1 (P-8A) – the RAF’s new submarine hunter – and this morning they are due to put on a joint display with South Korea’s Black Eagles display team, who put on a breathtaking show of aerobatics yesterday.

Speaking about the sensations of taking to the skies, Flt Lt Turner said: ‘It’s awesome, you do get a little bit nervous but it’s also a massive honour to wear the red flying suit and fly with the Union Jack on our arms.’

The temperature hit 27C in Gloucestershire with the sun beating down through the cockpits as the pilots defied powerful G-forces.

‘Luckily our sorties are quite short, about 30 minutes long,’ the pilot said.
‘It is very hot, we are melting. When you close the canopy it’s like a greenhouse. We do have air conditioning, it’s not great, but it does help.

‘The jet is an old aircraft but it’s been sold around the world and it can happily operate out of Canada, Greenland, Iceland in minus 30 degree temperatures and it can also work out in the Middle East at plus 30, plus 40 degrees, so it can be used everywhere.

‘We get quite hot when we’re in it, but the aircraft is fine.’

Acclaim for the year’s biggest-grossing film was accompanied by a desire to see more women take up real-world top gun roles, with Vorderman being among those urging cadets to be part of a more diverse air force.

Mandy, now aviation ambassador for the Department for Transport, said: ‘I absolutely adore Top Gun, it was that film that got me flying. It came out in 1986, the year that I joined the air cadets, but when I look at now it seems quite misogynistic compared to where we are at now.

‘There is absolutely nothing to stop anyone from becoming a pilot, we just need to create more role models, so when girls look at it as a career they don’t just see men doing it. Those role models are still few and far between so we have still got a lot of work to do.’

The annual show was sold out across the weekend and is expected to have attracted 175,000 visitors by the time it draws to a close today.

The trust provides engineering and flying scholarships as well as adventurous training grants.