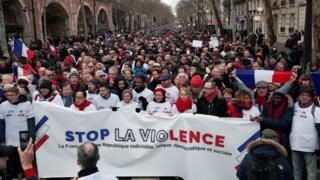 A group calling itself the red scarves has held a march in Paris to counter weeks of anti-government protests by the yellow-vest movement.

The “foulards rouges” is demanding an end to the violence witnessed at yellow-vest (gilets jaunes) rallies.

The gilets jaunes movement grew out of fuel tax protests in November.

It now embraces wider discontent with President Emmanuel Macron and has seen some of the most serious street violence in Paris since 1968.

But the weeks of TV footage showing clashes with riot police and damage to public monuments have triggered a counter-movement and the red scarves now have about 21,000 followers on Facebook.

“People are tired of the roadblocks. They are bad for business, and children are prevented from getting to school on time,” red scarves spokesman Alex Brun told French broadcaster RFI.

Ahead of Sunday’s rally in Paris, the red scarves put out a joint statement with similar-minded groups.

“We denounce the insurrectional climate installed by the yellow vests. We also reject the threats and constant verbal abuse (aimed at non-yellow vests),” they announced in a joint manifesto.

However, according to French media a split has already emerged among the red scarves over whether or not to show support for President Macron.

One of the organisers of Sunday’s march, Laurent Soulié, has rallied supporters on Facebook to back the president, RFI reported.

Mr Brun, on the other hand, said the foulards rouges was “an apolitical citizens’ movement”. He said the best way to resolve problems caused by the yellow vests was to take part in Mr Macron’s “Grand Debate” rather than confronting protesters on the street.

Some red scarves leaders had urged members not to attend Sunday’s rally.

Across France, about 69,000 people took part in the 11th consecutive weekend of yellow-vest protests the interior ministry said. That is about 15,000 fewer than last weekend. 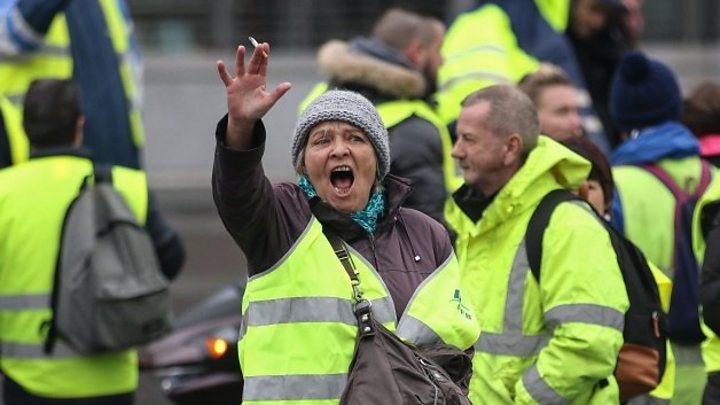